The Orland Park Public Library1 has a well-earned reputation for being a problem child library with spending problems.  This is the same library that was caught using taxpayer money to buy its board members gold jewelry2 and fancy steak dinners.  It's also the library that squandered half a million dollars or more3 fighting FOIA production and violating the Open Meetings Act (while also wasting taxpayer money on expensive donuts, out of town trips, and other treats for staff and board members).  While the reckless spending seems to have been toned down when it comes to board member gold and steak dinners, in one area the waste of taxpayer money seems to continue unabated at the OPPL: sending staff off on expensive trips to "conferences."

With public entities all across our state forever moaning about budget problems (or in the case of the OPPL, insisting they need endless levy increases and more taxpayer money), isn't it time to start questioning how necessary out of town trips are for staff members who want to go to fancy conferences?  Couldn't the learning they need be done right here in Illinois, particularly for public employees who are so close to Chicago (which is one of the training and conference capitals of the world).

Why does the Orland Park Public Library need to use taxpayer money on a trip for two to San Francisco?

In March 2016, the OPPL sent Assistant Director Robin Wagner, pictured below, and Virtual Services Manager Jason Rock,4 pictured top right, on an all-expenses-paid-by-taxpayers jaunt to San Francisco, California, to attend something called the "2016 Innovative Users Group Conference."  Large sums of taxpayer money are funneled into lobbying groups like the American Library Association (ALA) by way of these conferences, as public employees spend many hundreds of dollars just to register for the conference.  Groups like the ALA that put on these conferences then use that taxpayer money to lobby state and local governments for changes that benefit the organizations.  Those changes are not always beneficial to the public.  Without these conferences (and the annual membership dues that public employees pay to groups like the ALA), these lobbyists would not have nearly the revenue stream they currently do with so much public funds being funneled into them by way of the registrations for these events.

This is one of the great injustices in our country right now: taxpayer money every day is being handed over by public employees to lobbying groups who then push agendas that harm taxpayers.  This is like money being taken from you and then giving to someone who will punch you in the face at some point.  So you end up, in effect, paying someone to punch you in the face.  This wealth transfer from public bodies to private lobbying groups by way of expensive conferences has to stop.

The OPPL spent $650 just to register Wagner and Rock for this conference.  Thousands of public employees attended this event.  That's a lot of taxpayer money ending up in the hands of a lobbying group...but at what benefit to the public?

Was it worth all this to send two public employees to San Francisco for several days (or was it all just a big punch in the public's face)?
TOTAL = $3,655.185 (not including the payroll costs for Wagner and Rock to still be paid their salaries for the four days they were away from the OPPL on their San Francisco trip, but were still on the clock)

Was this San Francisco trip for two worth all those thousands of dollars...or could everything they learned have been done in Chicago at similar events or online in virtual training sessions?

While public employees might all love the idea of taking a "free" trip to San Francisco, no trip is really "free" because taxpayers have to foot the bill for all of this.

One of the most easily controlled expenses that public bodies can look at as a way to trim budgets is to evaluate the necessity of out-of-town travel for public employees.  Is flying all the way out to San Francisco really the best use of public money?  Should a library that always pleads poverty and desperation when it's time to raise the tax levy again really be sending not one but TWO of its employees to California for a conference, when it doesn't look like anything said or done at the conference couldn't have been achieved at similar events closer to home?  Did you know Innovative holds the same training sessions in Chicago? 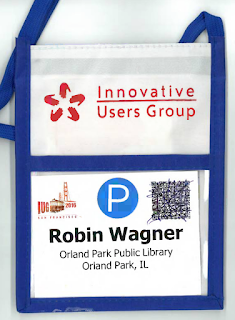 If Illinois ever wants to start digging its way out of the financial mess that it's in, one place to start may be saying NO once in a while to employees who want to go far away to expensive conferences.

The above is written by Kevin DuJan and is based on the library's FOIA response to him.

It is possible the above exposé led to the immediate resignations of the two people named above, including one who resigned the next day then left a day or two later:

And in another crooked Cook County, Illinois, library:


URL of this page: safelibraries.blogspot.com/2016/05/OPPL-wasteful-spending.html