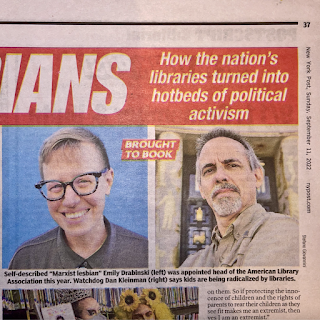 The American Library Association is now openly Marxist.  It needs to be defunded; governments must stop reimbursing librarians for anything having to do with ALA.  Its new President-Elect Emily Drabinski said:

I’m looking forward to thinking through how the resources that will be given to me can be put to good use for the goals that I think all of us on the left share.

[H]elping people access the language of a socialist vision of what the city could be and the role of the library I think is something I could do.

I really believe in collective power, and I believe in it because I've built it and I've used it, and I see what it can do in terms of fundamentally changing the conversation. I think about how many things we can talk about openly since AOC was elected, that we couldn't before.

I think the socialist project, along with a range of other movements against white supremacy, patriarchy, and others, has played a role in the fact that we can now talk openly about the abolition of the carceral state. The public conversation about defunding the police, and thinking about different ways of organizing our relations to one another. To me, that's something that’s only possible through deep organizing and is the ethic that we brought to the campaign.

It's funny, I am openly socialist, but I don’t pick the label and it's been made very clear to me that I campaigned for and won election to a fundamentally liberal organization, in the "small L", so publicly claiming a socialist identity has implications for the broader association.

I tweeted that I was a "Marxist lesbian" when I won, and I absolutely am a Marxist, and absolutely am a lesbian, but I got a ton of blowback, which is not great, but I don't know. We have to be brave, we have to be willing to fight, and the right has no compunction about being completely out there with their totally hardcore racist ideals, and their white replacement theory bullshit.

So funding American Library Association is funding "the left" and only "the left." Source:
Auston Democratic Socialists of America. “Creating a Socialist Vision for Public Libraries: A Conversation with Emily Drabinski.” Red Fault (blog), July 7, 2022. https://redfault.com/creating-a-socialist-vision-for-public-libraries-a-conversation-with-emily-drabinski/.
Fortunately, some libraries are already getting the message and defunding anything to do with ALA or its acolyte state library associations:
Camenker, Brian. “Big Victory: Wyoming Library Board Cuts Ties with American Library Association Over Graphic Children’s Books.” MassResistance, November 6, 2022. https://www.massresistance.org/docs/gen4/22d/WY-Library-exits-ALA/index.html.
I could go on and on about the rising Marxism at ALA and why it must be defunded, put this will be a good enough introduction:
Kleinman, Dan. “Marxist Elected American Library Association President; Vows to Wield Power.” SafeLibraries® (blog), April 21, 2022. https://safelibraries.blogspot.com/2022/04/marxist-elected-ala-president.html.
Kennedy, Dana. “Librarians Go Radical as New Woke Policies Take Over: Experts.” New York Post, September 10, 2022. https://nypost.com/2022/09/10/librarians-go-radical-as-new-woke-policies-take-over-experts/.  (See photo above, top right.)
Pullmann, Joy. “Amid Public Concern About Grooming Kids, American Library Association Picks President Who Pushes ‘Queering’ Libraries.” The Federalist, April 22, 2022. https://thefederalist.com/2022/04/22/amid-public-concern-about-grooming-kids-american-library-association-picks-marxist-lesbian-as-president/.
John, Matthew. “Marxism and Our Libraries: Where Do We Go From Here?” The Epoch Times, May 3, 2022. https://www.theepochtimes.com/marxism-and-our-libraries-where-do-we-go-from-here_4438513.html.
And here we see at LibLearnX the Marxism is now on full display, featuring ALA's Marxist President-Elect Emily Drabinski:

Bottom right is the new Marxist president of the American Library Association. The “organize and activate” is the full on Marxism @edrabinski promised.

NOTE ADDED 30 JANUARY 2023:
This report of mine has inspired Dr. James Lindsay to call for the defunding of the American Library Association in what has to be the biggest news—bad news—coming out of ALA's LibLearnX.
What an embarrassment for being called out as the "captured Marxist organization" that ALA has become.  Librarians should consider dropping membership in ALA as well; now that you know, choosing to stay will be self revealing.

Your occasional reminder that the American Library Association is a captured Marxist organization that is the heart of many of the problems in our schools. A productive activity would be pressuring dissociation from them locally and defunding [sic] them nationally. https://t.co/iXdi4aL81p

Your local schools and public libraries should formally dissociate from the American Library Association. Local authorities should make policy strengthening that stance and setting guidelines against captured organizations influencing our public facilities. All dues withheld.

Biggest news coming out of #LibLearnX23 is @ConceptualJames calling for governments to #DefundALA since it’s captured.

Find out if your schools + libraries use any @ALALibrary resources + policies, then extirpate them. Use #FOIA #OpenGov to find out.#parenting #moms #dads https://t.co/DPmx72soF8

.@ALALibrary just had its 2023 conf. w/ the theme of MARXISM. They elected a Marxist president Drabinski who ran her race on a socialist platform. Their keynote speaker was a Race Marxist Ibram Kendi. Their plan is to push Marxist agenda.

It is time to defund Marxist libraries. https://t.co/xNt0teLt1I