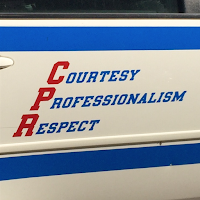 Courtesy, professionalism, respect.  It's the motto of the New York Police Department.  It is good for public servants to observe those values.

Sometimes public servants have neither courtesy, professionalism, nor respect.  When such a public servant is a member of a public library board of trustees, it can be all the more shocking.

Interestingly, while a library board member exhibited none of those values to me, his library director exhibited all of them, and in such a case the contrast is particularly striking.

So I wrote a letter to the library director asking him to see if he could guide the library's board into being more professional.  I did not do this to be obnoxious in any way.  Rather, I am trying to find any means short of continuing litigation to get the library board to comply with the law, something it has not done for almost a year, and to do so as quickly as possible to minimize the financial pain to the community.

In that light, I bring to you my attempt to stop a library board from defying the law for almost a year, including continual new violations of the law, because so far there have been absolutely no consequences for breaking the law.  One of the laws involved is a civil rights law; these are not frivolous concerns.  And this is a library that broke the law so as to ensure children retain access to the unfiltered Internet in the children's section of the library, even while knowing children have accessed hardcore pornography.  I'm not sure my attempt will work, but at least I am making an effort to gently advise the board that if it continues to defy the law, consequences will continue to mount and perhaps grow so large that the municipality itself will face liability for failure to stop the lawlessness.

I attended the Westfield Memorial Library Board of Trustees [the board] meeting yesterday on 25 February 2016.  At that meeting there were numerous possible violations of the New Jersey Open Public Meetings Act [OPMA].  I am currently suing the board and its 2015 members individually for what I believe to be other violations of OPMA.  So now it is possible the board and its individual members are serial violators of OPMA.  It is possible a Court might consider ongoing violations as an aggravating factor when determining what remedies to apply.

Further, as the board has many new members, and as OPMA violations appear to me to be continuing unabated despite the present litigation, it is possible I may decide to amend the existing litigation to advise the Court of the possible ongoing violations and possible new defendants, namely, the new members of the board.

However, the real interest here is that the board complies with the law, not that I add new counts to an existing lawsuit with each new violation and each new board member.  The board’s complying with the law is in the interest of everyone, me, the board, the municipality, the Court, everyone.  So at this moment I’ll not add new counts and new defendants nor file any new cause of action.  But in exchange, the board needs to make an effort to comply with the law.

Here are violations I saw tonight.  First, the agenda did not list the executive session.  By law, the agenda must be provided “to the extent known,” and certainly the board knew it was going to have an executive session this evening, just like it knew it would discuss everything else on the agenda.  See NJS 10:4-8(d). Second, the public announcement of the executive session listed two reasons for the meeting, namely, personnel matters and litigation.  That violates the law.  For example, it may not just say litigation.  It must specify what litigation is being discussed.  See: http://ogtf.lpcnj.org/2012/2012213OK/rutgersMc.pdf 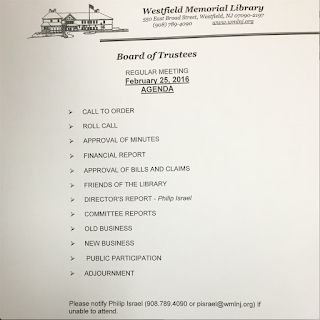 So the agenda listed “PUBLIC PARTICIPATION” then “ADJOURNMENT.”  I spoke at the public participation portion of the meeting, for example, warning a new library trustee that simply because a person challenged books does not automatically equate to censorship, as she had reflexively labelled it, portending a library trustee beholden to the American Library Association instead of acting in the public trust.  I also suggested that the dates and times of board meetings should be on the library’s electronic/online calendar as they used to be and on the web page dedicated to the board, not just hung on a sign in the library.  People look online for things these days.  Both suggestions seemed to be welcomed.  I sat down and everything appeared okay.

After I spoke, instead of adjourning per the agenda, the unlisted executive session was announced.  As I was leaving due to the closing of the meeting to the public, because I was aware the library likely should have listed the executive session on the agenda, I so stated that, to which one of the board members and a defendant in my existing lawsuit said to me, “public participation is closed,” meaning shut up and go away.  This is an aggravating factor to me of this latest OPMA violation and of previous ones as it evidences an atmosphere completely at odds with OPMA and no remorse for past violations of civil rights.  The board just violated OPMA again, I said the executive session likely should have been on the agenda in accordance with OPMA, and I was told to shut up, don’t tell us to follow the law.  That’s how I understood it.  I responded that it was unfriendly to say that as I was just advising them in respect of the law.  Then I left.  I was forced to make that comment after public participation had closed because the possible illegalities involving the agenda and the lack of specificity had occurred only after public participation had closed.  Was I to remain silent on yet more violations of civil rights under OPMA simply so I would not offend a bully board member?  Does OPMA require silence from the public when they witness lawlessness and it is not during the public participation portion of the meeting?  What goes on in the minds of board members who clearly show disdain for public participation and the law even in the face of litigation over that very law?

So here are issues for the board to address, and they should be addressed in public in compliance with OPMA. 1) The board needs to reverse its string of OPMA violations and begin to comply with the law.  Any negative consequences of OPMA litigation is the board’s fault for repeatedly failing to follow the law, not my fault for seeking to have the law enforced. If I do not see immediate improvement, I may consider amending my complaint to ask the Court to force compliance and include the new board members who are now possibly responsible for new OPMA violations, or I may bring a new action.  2) The board needs to be respectful of the public’s right to speak and not make snide remarks intended to tell someone to shut up and go away and don’t tell us to follow the law. Common courtesy should be enough to make that call.  But if that is too difficult for the various bullies on the board, at least consider that such actions might be considered as aggravating factors by any Court reviewing various possible and serial OPMA violations.  3) The board needs to correct past violations of the law, including those in my lawsuit: http://tinyurl.com/LibraryOPMA

I am going to continue attending board meetings at that library.  I am going to continue to expect compliance with the law and speak up at any time if I see violations of the law.  I am going to continue to write about noncompliance with the law.  Eventually the board will follow the law.  It would be best for everyone that it did so immediately on its own volition instead of having to be forced into it by application of the various remedies afforded in OPMA.  To the extent the board remains recalcitrant and drives up costs like legal fees that taxpayers ultimately pay, that will be the board’s doing, not mine.  I know American Library Association strategy is to fight tooth and nail to keep the public in the dark about how libraries break the law, even to the point of advising libraries to destroy evidence in violation of the law, and I know the board is already beholden to the American Library Association.  I know the American Library Association holds training sessions to teach librarians to use ad hominem argument to distract the public from a library’s own malfeasance.  If the board goes down the path of using lawyers to pound the public into submission while maintaining the illegality, that will be the board’s doing, not mine.  It would be best for the board to simply follow New Jersey’s law instead of Chicago’s American Library Association.  It’s going to end up doing that eventually anyway, so the sooner the better for everyone.

You may have noticed when the issue came up of the removal of the dozen or so drug and alcohol books from the youth section in respect of a mom’s challenge, I suggested applying the library’s book selection policy then advising the mom such books are within that policy.  So I am not there to complain about everything the board does and support every complainant.  Rather, the board in my view is now on a nearly year-long string of defying OPMA, and I have every right to seek enforcement of civil rights in such a case, in fact I have a First Amendment right to do so.

I thought you should know this and please forward to the board.

And while I am at it, I’m very impressed with your own professionalism as library director.  You are consistently excellent, even as board members make flip or rash statements about censorship or tell the public to shut up and go away, both exemplified by the American Library Association. Please try to help the board to come into compliance with the law, especially OPMA, and to act professionally as you do.  I’m not sure what it hopes to gain by its continuing defiance of the law that is about to span an entire year.

CC to Westfield Mayor and Town Council as two of the Council are involved in this matter and it might be time for the municipality to finally stop the board from acting outside the law, which the municipality was every right and duty to do, before potential liability grows to subsume the municipality as well.


URL of this page: safelibraries.blogspot.com/2016/02/courtesy-professionalism-respect.html