Looking at that picture, it is easy to see there's a clear problem.  So I had to investigate this library that was pushing Christianity on everyone, because libraries just do not do that.  I wanted to see that for myself, to see if the story was true.

But I was in for a big surprise.  So surprised I took my own pictures so people can get the whole picture, not the myopic view that initially fooled me.  I took dozens of pictures: 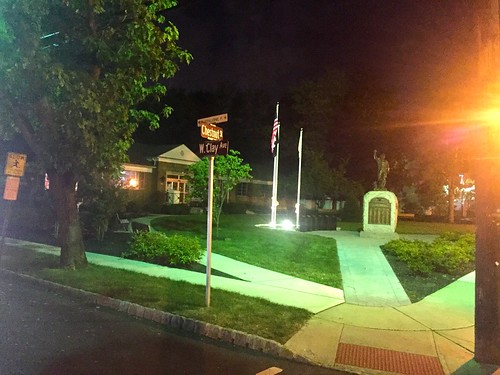 Wow. I've never seen a library that loves veterans more than the public library in Roselle Park, NJ.  It is even called the Roselle Park Veterans Memorial Library [RPVML]: 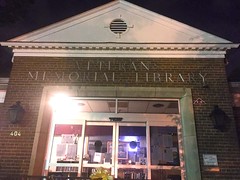 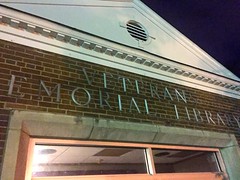 It is just dripping, both inside and outside the library, with love for America and the veterans who keep her free from tyranny.  And it appears the entire town feels the exact same love.

I mean this library has to be the most patriotic, the most pro veteran in all the USA.  Immediately you see three giant flagpoles topped by the American, the New Jersey, and the POW/MIA flags. 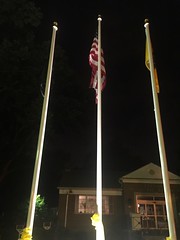 There's an humongous monument topped by a giant bronze soldier. 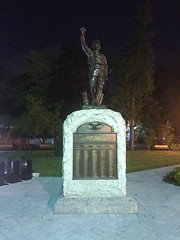 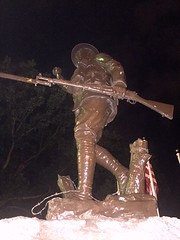 There are a ton of smaller monuments all around. 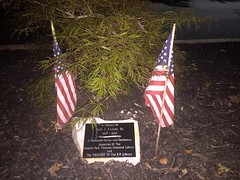 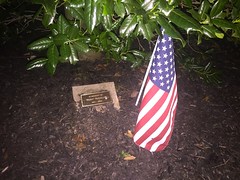 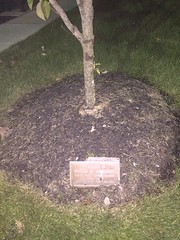 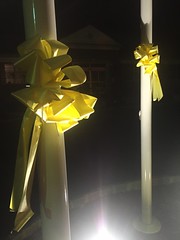 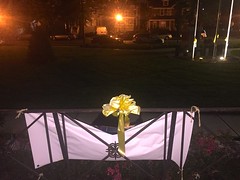 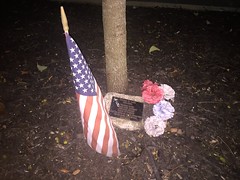 Even the people who complained seem to have a part in the memorial atmosphere with this lovely park bench that's part of the library's huge memorial display.  As The Washington Times put it, "Mr. Storey had alerted the American Humanist Association of the memorial": 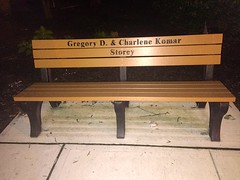 Have you ever seen a Christmas house or a Halloween house, you know, the ones where the people clearly love Christmas or Halloween and put out a huge display that sucks up a ton of energy and that all the neighbors have to see and people come from far and wide just to enjoy and it makes it into the news?  Well this public library is like that, only the theme is patriotism, the American flag, and the veterans who keep that flag flying. 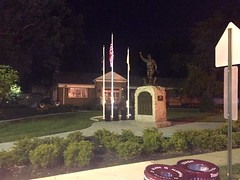 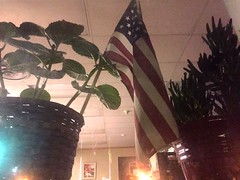 What an impression I got from that.  Then I remembered I was there to see this massive cross that was the only thing pictured by the atheists on display at the library.

There are so many monuments, memorials, and dedications that I had to hunt for the cross.

I finally found the cross.  That's it?  That's what the atheists set their crosshairs on?  That's why they are threatening to sue the city so they sent a bullying letter filled with legal legerdemain?  You can hardly even see it in the third picture: 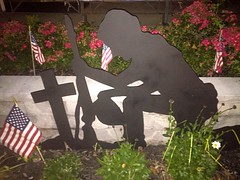 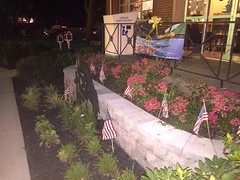 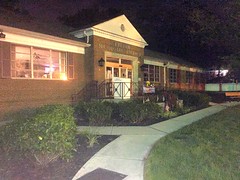 I became cross.  I realized instantly that I had been had.  The impression I got from reading the atheists' letter was completely false.

Oh my, that cross was not noticeable in the slightest in all of the statutes, memorials, flag poles, dedications, monuments, flowers, yellow ribbons, and flags placed all over the place until you got very close and stood at the right angle.  I almost had to laugh.  These people had to ignore this amazing library and all the huge array of signs of respect for veterans and the freedom they ensure to zero in on a single cross in all that display.  Well their Twitter name is @AmericnHumanist so clearly number one is being a "humanist" and being "Americn" comes second.  So I suppose I'm not really surprised by this latest attack on the civil society.

The cross is de minimus in all that is displayed on the library's lawn and inside the library.  You do not even have to pass the cross to get into the building.  There is absolutely no way this cross can be considered promoting religion in any way since it is a very small part of a very small part of all that library has to offer in respect of veterans that does not otherwise have anything to do with religion.  And depending on how you look at it, you cannot even see the cross even if you are standing right over it, and yes, it's there: 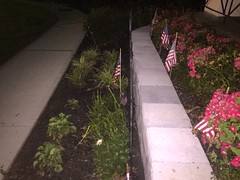 And I didn't even get into the building yet.  The inside is equally loaded with love for America and its veterans, especially local veterans.  Look at this fine painting depicting the large monument outside: 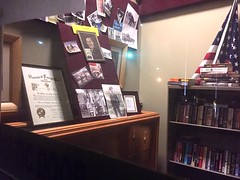 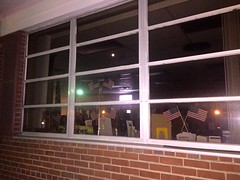 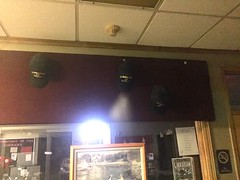 And the entire town appears to be equally concerned for America and for veterans: 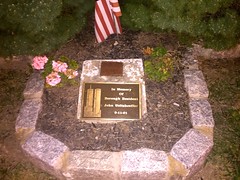 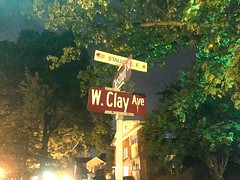 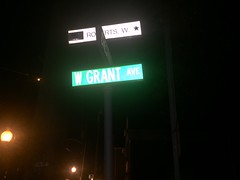 There's even a Roselle Park Museum that also honors veterans: 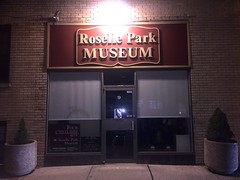 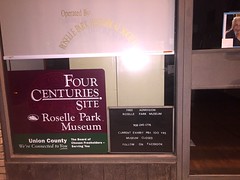 Those atheists are lying.  They present a single picture as if it's the only display at the library and they intentionally leave out the context showing that the Roselle Park Veterans Memorial Library takes its name extremely seriously.  Really, if you live nearby or if you are a veteran, you must visit this library.

It's like books.  We hear constantly that parents and teachers should not base decisions on books in public schools on a single paragraph that might be inappropriate.  No, we hear instead that the single paragraph must be considered in context.  "It all comes down to context, a fact that most individuals and groups with ruffled feathers disregard without considering each text as part of a larger and often essential conversation."  The work has to be considered as a whole.  A single word or paragraph must not be the sole focus of attention and used as the basis to remove a book from a school library.

Well that's what the atheists have done.  They have focused on a single item and ignored the whole.  That's deceptive.

Worse, they threaten legal action.  Literally, the atheists are attacking the library in a deceptive manner that makes a Christian cross loom large when in reality it is a minute part of an absolutely huge demonstration of love for America, for veterans, and for local heroes.  What happened to love wins?  Anyone being honest and looking at that massive display of love knows it has absolutely nothing to do with the promotion of Christianity.


“By voting in favor of this religious display and ignoring the objections of local residents, the Borough of Roselle Park and the mayor are making litigation inevitable,” said Monica Miller, senior counsel of the Appignani Humanist Legal Center. “The Christian symbolism of the memorial and its placement on public property give the impression of government favoritism toward religion, in violation of the First Amendment.”

That is false.  It is not a "religious display."  It is a veteran praying for or on behalf of a lost friend.  It's about respect, not religion.  As to "the impression of government favoritism toward religion," that is false too.  In the context of the whole, not a closeup on a single small element, the impression is one of respect for veterans who fight and die for America.  Presenting the single picture and ignoring the context is deceptive.

Look how the atheists threaten the library to silence free speech and bring about censorship:

So Roselle Park is supposed to kneel down to the American Humanist Association from Washington, DC, to censor a soldier kneeling down to honor a fallen hero?  I can guarantee you those other cases differ from the Roselle Park case in that the Roselle Park case is intentionally taken out of context by the atheists to give the appearance the cases are equivalent when in really, looking at the whole, the cross is clearly part of a massive display of love for country and veterans, not for the promotion of religion.  And the "pending lawsuits" don't count and are just thrown in for bullying purposes.

Further, if anything, other religious symbols should be added, rather than a Christian symbol being removed.  Consider what the American Library Association has to say about this in something that is analogous:


Exhibits and Displays
Should religious groups be allowed to use library exhibit or display space?
Libraries are not required to open display or exhibit space to community groups. If libraries choose to open their exhibit and display space to community groups, space should be provided on an equitable basis to all groups that request it, regardless of the beliefs or affiliations of individuals or groups requesting their use. A library may wish to consider the amount of such space and its location when deciding whether to open it to community groups. Article II of the Library Bill of Rights states, "Materials should not be excluded because of the origin, background, or views of those contributing to their creation" and "Materials should not be proscribed or removed because of partisan or doctrinal disapproval." For additional details, see "Exhibit Spaces and Bulletin Boards: An Interpretation of the Library Bill of Rights."

Well it appears the atheists want the cross removed precisely due to "partisan or doctrinal disapproval."  Yet that goes against "Article II of the Library Bill of Rights."

Atheists are welcome to believe what they like but they are not welcome to attack public libraries with legal threats and deceptive claims of First Amendment violations, the very action they themselves are trying to force the Roselle Park Veterans Memorial Library to do.

Here are some responses I have received to the above:

I have learned the bullies have sued Roselle Park and the Mayor has at least temporarily removed free speech from the library that opposes the removal of free speech.

I have begun to look at the lawsuit.  I have not read it all yet.  But right up front it is clear that the bullies have redefined the facts.  The very first sentence starts, "A Christian cross display...."  That is not a display of a Christian cross.  That is a display of patriotism and graveside respect for a fallen veteran.  The cross is incidental to the graveside respect and in the USA is likely at the vast majority of gravesides.  Indeed, the entire sign is incidental to the massive display of patriotism and respect for veterans that I photographed and recorded above.

So this attempt to change the facts by turning an interpretation of graveside respect into a "Christian cross display" then repeating that fakery as if it were true is what this whole case revolves around and why I predict it will ultimately fail.  The atheists have picked the wrong target.  The library promotes respect for veterans, not Christianity—it's even called the "Roselle Park Veterans Memorial Library."

When Roselle Park responds, I hope it will not use the "Christian cross display" language and instead uses an accurate description.  Don't them them redefine the facts.  If it uses the fake language promoted by the bullies, I predict it will lose the case.

Also, I hope Roselle Park countersues for frivolous litigation and doesn't cave to out-of-state haters.  "Humanists."  Haters is more like it.  Here's an example:

URL of this page:
safelibraries.blogspot.com/2016/08/atheists-attack-library.html