ALA Pushes Drag Queen Story Hour at ALA Annual Conference 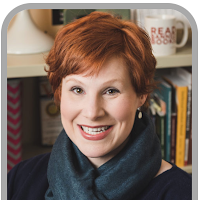 American Library Association pushes Drag Queen Story Hour at its biggest conference, ALA Annual, by training librarians to push it into communities nationwide.  Notice, no mention of literacy—just intersectionality, no mention of unvetted drag queens turning out to be pedophiles like at Houston Public Library, no mention of how DQSH harms the LGBT community, but there's the Office for Intellectual Freedom "expanding boundaries" at this training session with the Assistant Director (a nice person individually) as a speaker.

I am writing about the pervasiveness of ALA's DQSH promotion, or DQS as they call it, so stay tuned here.

"This session will explore the public library as a site for the intersection of gender expression/identity and intellectual freedom, by discussing the phenomenon of Drag Queen Storytime (DGS). The session will consist of a panel featuring originators of the DGS concept; librarians whose institutions have been involved in DGS, with both the popularity and the controversy that have ensued; and a local drag queen storyteller who will read a story to the audience. The DGS program has been immensely popular with many audiences at libraries across the country, but it has also produced its share of resistance and controversy. The panel will discuss how DGS was developed and originally implemented, how librarians have been using it today, how institutions have dealt with specific successes and controversies, and how DGS relates to intellectual freedom."

Source (archived), linked from here: "Que(e)ry's Coming to ALA Annual in Washington D.C.!" 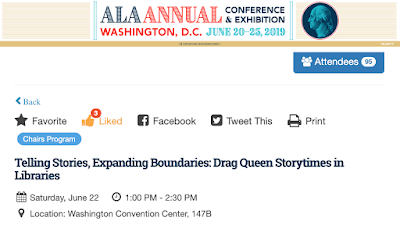 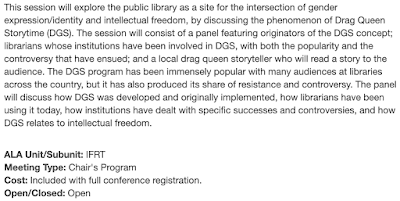 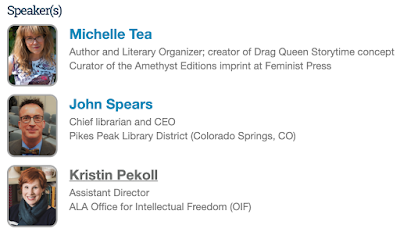 What is interesting is that they are holding a panel about DQSH, when in fact they are outrighting supporting it. They want to appear to show concern via debate panel. On the contrary, the ALA champions this indocrination platform.
— Kyle (@CCLibrarianLV) June 21, 2019

URL of this page:
safelibraries.blogspot.com/2019/06/ala-pushes-dqsh.html 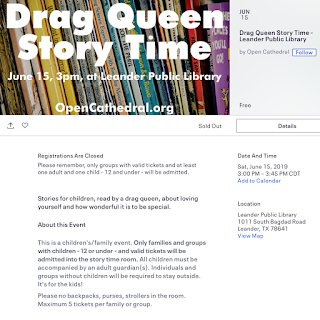 I am saddened, dismayed, and disgusted by the lack of courage taken up on this council to put a stop to the Drag Queen Story Hour program at the city library.

Two of the city council members had contacted me last month, and they assured me that they had nothing to do with this program, and they cancelled it. 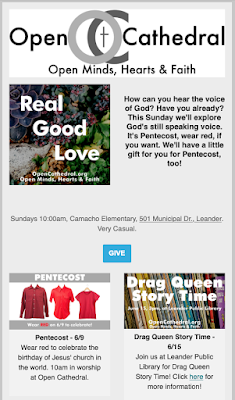 Now it's being promoted by this so-called "Open Cathedral" church in Leander. You have a duty to put an end to this travesty. Drag Queen programs across this country are part of a perverse agenda to normalize sexual confusion and deviance. This is not about openness or acceptance at all.

Ironically, this church is not very open about who the Drag Queens are who are reading to these children on June 15th, I contacted the library, as well, and the staffers cannot tell me who is going to be reading to the children! The church has not responded at all.

Our Houston MassResistance leader Tracy Shannon exposed that not one but TWO sex offenders were intermingling with the children at the Freed-Montrose branch of Houston Public Library earlier this year. And now the Leander Library does not even have the common decency to inform the public—in a public library paid with public money—which drag queens (their stage names as well as real names) who will be reading to impressionable children.

This whole thing just reeks. This program must be suspended immediately. The lack of transparency, the insistence on hiding from the public what is happening at this library—it's just terrible!

I demand an answer on this right away. 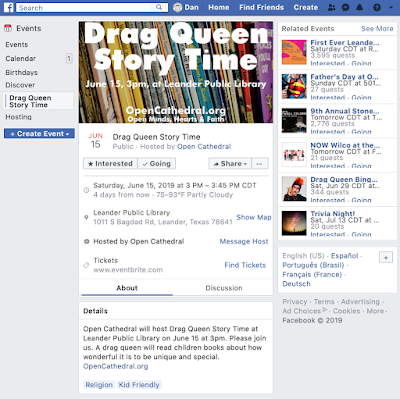 PS. — Do not give me this excuse that the library is run by a third-party contractor, therefore the city council has no authority to stop the program. The funds are the city funds, and the contract was initiatied by the city. You as city council members have full power and responsibility to put an end to this perversion.

[NOTE: Graphics and minor changes added by SafeLibraries; I'm a recipient of this email.]

URL of this page:
safelibraries.blogspot.com/2019/06/city-of-leander-texasno-drag-queen.html 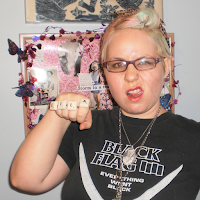 Knowing who she is politically is important since even someone like her thinks drag queens reading to kids in libraries may be inappropriate.  She's just honest enough to admit it publicly.  That said, in the past she has been dishonest about me so she could defend homophobia by American Library Association that persists to this day, but I agree with her about how ALA is using the LGBT community since that's consistent with how ALA uses the same community to promote its annual "Banned Books Week" hoax.

For those not in the know, DQSH is where drag queens read to children in public libraries due to American Library Association political activity unrelated to libraries.

Here is the first in a string of tweets from Ingrid Abrams, followed by the entire string in text:

I've been thinking a lot about Drag Queen storytime+my concerns about next steps, or steps before DQST. Basically, if the only non-gender conforming rep you have at your school/library are drag queens, what message are your students getting about gender?
— 👁️Ingrid C-A👁️ (@MagpieLibrarian) January 10, 2018


I've been thinking a lot about Drag Queen storytime+my concerns about next steps, or steps before DQST. Basically, if the only non-gender conforming rep you have at your school/library are drag queens, what message are your students getting about gender?

Gender identity and presentation are multi-faceted and complex, and I'm concerned that students/patrons are getting the message that the only way to be gender non-conforming is to spend 3 hours on your makeup+hundreds of dollars on a dress.

Certainly better representation than NO representation, which is what kids get anyway, but it leaves a lot of other kids in the cold.

If a person performs drag, it doesn't dictate their sexual orientation or gender identity. Performers may gay or bi or straight or cis or trans. Are kids getting that message? Are they getting other kinds of non-binary/gender non-conforming representation?

Are these patrons/students getting support outside of DQSH? Non gendered bathrooms? When they sign up a library card, are they asked if they are male or female, or is the sign up more inclusive?

Is the library/school welcoming to queer kids and families with queer members? Or are we just hosting Drag Queens for an hour a month because it's cute and fun and trendy and then calling it a day?

This being said, I love drag performance, I love that drag performers care about kids and care about libraries and are reaching out to kids who deeply need the representation.


Lastly, for bringing this to my attention, hat tip to "Underground Educator," one of a number of whistleblowers who oppose how ALA harms communities, including "Activist Mommy - Elizabeth Johnston":

One of the many reasons we parents are fighting hard against Drag Queen Story Hours! https://t.co/CF0f3pvNWK
— Activist Mommy - Elizabeth Johnston (@activist_mommy) June 6, 2019


By the way, I ask if little kids should be giving money to drag queens dancing in public libraries:

URL of this page:
safelibraries.blogspot.com/2019/06/dqsh-leaves-kids-in-the-cold.html