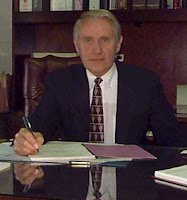 Montgomery County School Superintendent Daniel Freeman is a hero.  He has stood up to false cries of "censorship."  He has put "national anti-censorship groups" in their place (hint, not in Montgomery County High School).  He has acted in the best interests of the children and the local community that pays his salary.  That community ought to give him a public commendation.   Other communities ought to use him as an example of true school leadership.  See: "Book Ruckus Divides Montgomery County Residents," by Jim Warren, Lexington Herald-Leader, 29 November 2009 (404 link removed, try this):

"It's not censorship when you make wise decisions about what can be used in the classroom," parent Cyndi Murphy said.

The challenged books include Twisted, by Laurie Halse Anderson; Deadline, by Chris Crutcher; Lessons from a Dead Girl, by Jo Knowles; and Unwind, by Neal Shusterman.

The titles appeared on suggested book lists compiled by the Young Adult Library Services Association, a division of the American Library Association, for 12- to 18-year-olds who are "reluctant readers."

This is not the first time I've seen the American Library Association's [ALA] recommended books for "reluctant readers" given the heave ho.  For one example, the ALA listed a certain book in "ALA | Quick Picks for Reluctant Young Adult Readers," and, as a likely result, a librarian ordered that book for hundreds of New York City schools.  Then the parents found out.  See "City's Ed. Boobs," by Carl Campanile, New York Post, Oct. 13, 2003.  That was the end of that. Hundreds of schools removed the ALA-recommended book.

The parents in Kentucky have the right attitude too.  (Hint, consider this for your own communities, especially the "literary quality" of the material in that it is not appropriate for college placement.  In another context, material can be "perhaps not the most literary," as even the ALA has admitted, but that's a separate issue):


Sterling and others note that students in classes where the disputed books were offered could opt out of reading them and select other titles if they chose.

But Nancy Cooper, a parent involved in the protest, contended that in practice many students might hesitate to opt out, even if they found a book objectionable.

"If there is a book and I think my parents won't like it, I'm probably not going to say so because I'm sitting there with my all peers," Cooper said. "You don't want to be the one who is different."

Cooper, who is a teacher, said parents objected, not just to the language and themes in the books, but also to their literary quality. She says she couldn't find any of them on college-bound reading lists.

"The reading levels on these books are fifth-grade and sixth-grade, but we are talking about accelerated, college-bound classes," she said. "It's a matter of what is appropriate in academics.

"We didn't ask for the books to be taken out of the library, or for them to be removed from the book club. We are saying that we think there are more appropriate and better reading materials available for college preparation."

This is what proves the superintendent has a spine and is a hero:


Meanwhile, Freeman, the school superintendent, contends that many who have protested his withdrawal of the books are misinformed.

"They seem to think the books were taken out of the library or that kids aren't allowed to read them, which isn't true," he said.  "I really think some people don't understand what the issue is."

Freeman says that as of now, he has told high school staff and faculty that the challenged books are not part of the approved curriculum, and shouldn't be used in class.

"I wrote the teachers over a month ago and said, 'show me why the books should be in the curriculum and we'll reconsider that decision,"' he said.  "I'm certainly not the world's final authority on what ought to be in a college curriculum.

"But so far I haven't heard a word from anybody about why we should use these books."

Bravo Mr. Freeman!  People who stand up to the "misinformation" are few and far between.  I hope your community recognizes you for the gem you are.

Speaking of misinformation, here are some of those claiming censorship and opposing Mr. Freeman:

Also, the National Coalition Against Censorship [NCAC] is one of the "national anti-censorship groups" to pressure the local community.  See: "Kids' Right to Read Objects to Censorship in Kentucky High School," by Joan Bertin and Chris Finan.  The NCAC promotes pornography usage.  Joan Bertin herself supports censorship of those trying to keep inappropriate material from children, and uses doubles standards and fact changes to support her cause.

By the way, teacher Risha Mullins should not be fired.  Neither should she be dropped simply due to this issue.  She sounds like an excellent teacher, based on the various sources I have read.  She could easily follow the new rules while continuing to encourage reading, even with the books removed from the curriculum—no one's censoring or banning anything.  Common sense, no?

I hereby encourage Ms. Mullins to work within the curriculum to continue to promote reading the best she can, then write a story about her experiences doing so.  I am certain her guidance may help many others to meet curricular requirements while encouraging children to read via her innovative means.  If I find out she has written such article, I will update this blog post accordingly.  Brava Ms. Mullins!

Author Chris Crutcher is actively involved in this matter.  I thank him for adding a link to my blog post on his own web site.  I'm with select company there, as shown below, so I can only assume he feels I have said something of value.  Might it have been my support for the teacher Risha Mullins and her work to promote reading, including the challenged material?  Please visit "Deadline Banned?" and see what he has to say on this and other matters.  I have always supported authors, so truly, thank you, Chris Crutcher:

Risha Mullins has written extensively about her experience and critically about this SafeLibraries blog post here: "Censorship at its Finest: Remembering," by Risha Mullins, For the Love of YA (Review & Author Interviews), 2 October 2010.

Risha Mullins said, "A patronizing post on Safe Libraries blog (which now follows my blog) heralded my superintendent as a hero while characterizing me as a misguided teacher with good intentions who didn’t know how to follow the rules: http://safelibraries.blogspot.com/2009/11/kentucky-school-superintendent-exposes.html"

Ms. Mullins, thank you for linking to me and recognizing the blog post and particularly the comments are particularly interesting.

Based on what you said, I reread my own post to be sure I did not say what you said I said. Yes, the superintendent is a hero in a time where people are expected to bow down low and immediately to the American Library Association, the National Coalition Against Censorship, the ACLU, and other external pressure groups.

So I said quite the opposite, and at a time when people who supported the superintendent were opposing you. Instead, I supported both of you. As far as I know, I was the only one doing so. Indeed, that's likely why so many interesting people directly involved in the issue responded to my post. Specifically, I said:

"By the way, teacher Risha Mullins should not be fired. Neither should she be dropped simply due to this issue. She sounds like an excellent teacher, based on the various sources I have read. She could easily follow the new rules while continuing to encourage reading, even with the books removed from the curriculum—no one's censoring or banning anything. Common sense, no?

"I hereby encourage Ms. Mullins to work within the curriculum to continue to promote reading the best she can, then write a story about her experiences doing so. I am certain her guidance may help many others to meet curricular requirements while encouraging children to read via her innovative means. If I find out she has written such article, I will update this blog post accordingly. Brava Ms. Mullins!"

I must say, Ms. Mullins, I have supported you. I will continue to support you. I would appreciate it if you would somehow correct the record where you said I said things that I neither said nor implied. I would really appreciate that. Thank you very much.


NOTE ADDED 5 OCTOBER 2010:
Shockingly, Risha Mullins has self-censored her own blog post!  See: "Censorship at its Finest: Remembering," by Risha Mullins, For the Love of YA (Review & Author Interviews), 2 October 2010, Version 2.  It now contains nothing of the original version.  However, the original post has been intentionally republished here: "Censorship At its Finest: One Teachers Story on How Ignorant Parents are Destroying Quality Education," by treeonthehill, Reddit, 5 October 2010.

Here we have a teacher who was extremely promising and willing to really educate children.  She has suffered an ordeal so bad that she can't even feel free to leave what she wrote about it online.  I urged her to write about her experiences the first time I wrote about her.  Now that she has and she has removed it, I feel even more sadness for her.

Contrast such an excellent, caring teacher with a teacher/librarian in New Jersey who has expressly refused to perform the duties for which she was hired.  Instead, this teacher, Dee Venuto, has decided certain books are so filled with inappropriate material that she can't read them but lets her students read them and decide if they are appropriate!  See for yourself at "School Media Specialist Passes Sexual Content Review to Students; Dee Venuto Says It Is Discrimination to Keep Children From Material Including Lengthy, Vivid Descriptions of a Ménage a Trois," by Dan Kleinman, SafeLibraries, 18 August 2010.

Risha Mullins has explained her self-censorship in her newest blog post, "This is Not Me Backing Down," by Risha Mullins, For the Love of YA (Review & Author Interviews), 5 October 2010.

Quoting her, "I removed my blog in protest to the hostile, hate-filled rhetoric being sent to my former administration and colleagues in my name. [L]et me beg of you to stop this harassment."

It has been my experience that the free speech advocates are the meanest of the mean bent on pure harassment to shut down the few voices that are not cowed into speaking like them or shutting up.  What Risha Mullins has said is brave yet again since she is a free speech advocate, but one who speaks the truth about the viciousness of those who claim to be for free speech.

As Dan Gerstein said, "The ... elites have convinced themselves that they are taking a stand against cultural tyranny. .... [T]he reality is that it is those who cry 'Censorship!' the loudest who are the ones trying to stifle speech and force their moral world-view on others."

Thank you, Risha Mullins, for making that point crystal clear.