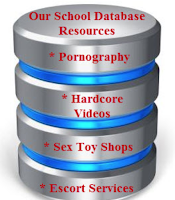 
Here's guidance from Safe Schools, Safe Libraries, brought to you by the National Center on Sexual Exploitation (NCOSE), including detailed examples of what EBSCO serves to children:

None other than the so-called "Freedom to Read Foundation," a part of the American Library Association, is proud to report that its "trustees and liaisons" strategized about "a new movement calling for censorship or filtering of research databases, arising from an unsupported belief that the databases allow children to access pornography...." 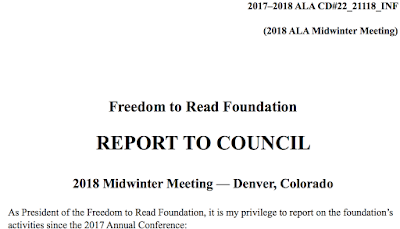 Many thanks to our #LibraryChampions, @EBSCO! The pods at booth 2531 are amazing, so don’t miss them! #alaac18 pic.twitter.com/FuRheuGjP6
— American Library Association (@ALALibrary) June 24, 2018

Lastly, here are related tweets and a video from a number of sources:

The latest issue of Journal of Intellectual Freedom and Privacy (JIFP) is live, featuring an essay by @OIF's @jaslar on the growing attempts to remove access to @EBSCO from school libraries https://t.co/Pd8Y9q2q56 #intellectualfreedom
— Michael Zimmer (@michaelzimmer) April 9, 2018

URL of this page:
safelibraries.blogspot.com/2018/08/ebsco.html 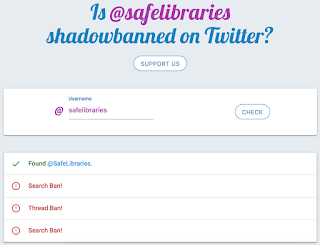 SafeLibraries is shadow banned at Twitter as a direct result of librarians using the heckler's veto to silence me for exposing the harms of the American Library Association [ALA].  They publicly and falsely attack me and call for other librarians to block me on Twitter.  Perhaps hundreds do.  The result is Twitter algorithms have completely silenced me unless someone goes directly to my account.  I'm shadow banned.

There is no way for me to explain to Twitter that I have been the victim of a concerted censorship effort by librarians.  As a result, literally the only voice speaking out for an end to the sexual harassment of librarians by library patrons viewing Internet pornography is silenced.  Twitter is silencing that voice.  The attacks, even those amounting to defamation per se, are never blocked by Twitter.

So we understand what Twitter is silencing, here are some of the harms of ALA that I expose: 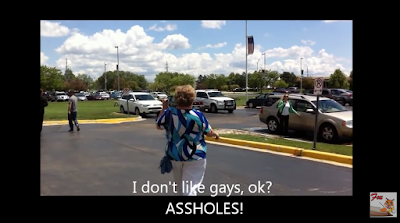 Because I expose those harms and name ALA as the source, some librarians attack me.  Here are some of the tweets that defame me and that call for me to be blocked by other librarians.  Some mock my race, some mock my assumed religionKnow that I was a volunteer librarian for two years, I am seeking to stop sexual harassment of librarians, I have never "doxxed" anyone—reporting unprofessional behavior like defamation is not doxxing, and I am not "anti-porn," rather I oppose how ALA misleads communities into harming themselves (and sex trafficking victims) by ignoring the law and legal precedent to advise the opposite.

There's a long list here to show the long-term effort to defame me and to get those hundreds of librarians to block me, and they do, that Twitter apparently then used for its shadow ban, and these are just some of the worst instances:

Hey @OIF, a good way to know that you're on the wrong side of history is when Dan Kleinman, aka the anti-porn but pro-hate group guy, is on your side. pic.twitter.com/4VbgHgG3ZD
— 👁️SJW LBGTQ STUFF👁️ (@MagpieLibrarian) July 16, 2018

One of my VERY favorite Safe Libraries comments, right before I blocked his ass for forever and eternity: pic.twitter.com/yYSh7H7yHg
— 👁️SJW LBGTQ STUFF👁️ (@MagpieLibrarian) December 2, 2014

By the way, even a few libraries block me on Twitter, something that may be illegal, and one reversed its ban after I simply asked (a friend of @MagpieLibrarian simply applied the block because he controlled the library's Twitter account; the director reversed that once she learned of the situation).  Those that block me are usually the ones that have committed various offenses against their communities and even against the United States of America.  Definitely a number of ALA leaders block me, including ALA Presidents and, oddly, the head of the Office for Intellectual Freedom.  When you're taking flak, that means you're over the target.

You cannot find me in a search, meaning my name will not be autosuggested.  You have to know it and type it directly into the search box.  I see it when I'm logged in and I search, but no one else sees it.  Go ahead and try it for yourselves.  Search for @SafeLibraries.  It's not there.

I also learned that when I use hashtags, no one sees my tweets containing those hashtags.  This means Twitter is useless for speaking publicly as it now only allows me to read but not respond to what others say in a manner that uses hashtags, the leading way to be heard.  I cannot say #ShadowBanning, for example, or rather I can, but Twitter will suppress my tweet when people search for that tag.

For example, the other day I participated in a conversation at the hashtag #critlib.  Only I didn't realize I was really not participating because Twitter took that ability away from me.  No one saw my comments.  I didn't realize this so I was wasting my time because of Twitter, the obvious effect being to discourage me from exercising further First Amendment rights to free speech since they would only come to naught.  If I looked at the #critlib tweets, I could see mine.  But if other people looked, my tweets were excluded.  It's likely why no one responded to me as they did on that hashtag in the past before I was shadow banned.  Shadow banned really means banned, nothing shadow about it.

Take a look yourselves to see how I am excluded from #critlib chat: https://twitter.com/hashtag/critlib?src=hash even though the librarian harassing me for over five years and complaining about my assumed race and assumed religion and assumed job has comments there responding to me and furthering Twitter's censorship, like this one:

Here are some of the tweets that I wrote that no one saw during the conversation and no one can now see that had been and remain excluded as a result of Twitter's censorship.  In response to #critlib questions I raised legitimate issues that no one saw.  Here they are:

A4. ALA could be more inviting if it stuck to issues of libraries, librarians, librarianship and not social justice—which has nothing to do with true justice—just the opposite. #critlib #NoHateALA #LibrariesRespond
— Dan Kleinman ❌ (@SafeLibraries) August 1, 2018

A2. The initial best way to handle it is the same for “Banned Books”—just ignore the issue (and let them meet, unless in the past they caused (and not been victim of) a crime). When you bring attention to the issue, it only grows larger. #critlib
— Dan Kleinman ❌ (@SafeLibraries) August 1, 2018

#Critlib. No, I disagree. Librarians should not be in a position to make those decisions.

I’m Dan from SafeLibraries, #critlib, and the way #NoHateALA is treating @ALALibrary @OIF @jaslar with accusations of racism is atrocious. Further, revelations about sex, children, and Morris Dees and the many scandals makes @splcenter a bad group on which to base #censorship.
— Dan Kleinman ❌ (@SafeLibraries) August 1, 2018

So those tweets are literally made invisible by Twitter, even during the ongoing #critlib discussion, even by the very people viewing the #critlib hashtag.

Lastly, to tweet about this publication, "Twitter Censorship via Librarians Enables Harm," hashtags for me are now useless.  I cannot say #ShadowBanning, for example.  I'll have to directly tag people.  It's speech censorship and denial of press freedom pure and simple.  And I am the only press reporting on how ALA harms communities.  And it's done by Twitter, at the hands of a mob of harassers who seek to silence my advocacy about how communities can protect themselves from the many harms caused by ALA.

So, in summary, what we have here is Twitter censorship, via librarians, where both the librarians AND Twitter enable the harms of the American Library Association listed above by blocking one of the few voices speaking out against them.

And Twitter provides no means to address the censorship which it should not even do in the first place.

I am going to make an effort to join any legal action against Twitter.  Congressmen Devin Nunes and Matt Gaetz, for example, are taking legal action.

"My suspicion is if people were communicating a conservative message, they were caught in @Twitter's troll tap. I think that is illegal because it gives advantages to our political opponents and gives them access to a flat form we don't have." pic.twitter.com/5Qn5dqbjpT
— Rep. Matt Gaetz (@RepMattGaetz) July 30, 2018

Hat tip to Kevin DuJan @HillBuzz for the idea to contact Devin Nunes and Matt Gaetz.  Mr. DuJan is my cowriter with me on this publication for a good reason.  And he's the "gay" and the "fruit" that the library employees maligned and that ALA blocked from an open public meeting celebrating the awarding of an "intellectual freedom" award to a library (Orland Park Public Library) that facilitated child pornography viewing by following ALA guidance, and was protected by ALA's direct intervention.

Twitter censorship has taken away my audience, but more importantly, it has taken away the public's opportunity to learn how their governments, as expressed in libraries by legislatively-constituted library boards, have been subverted toward doing the public harm and exposing library employees to sexual harassment.  No one can seek redress of their government under the First Amendment, at least on the issue of the harm enabled by ALA-recommended lawlessness in public schools and libraries, if my First Amendment rights are being trampled by Twitter.

Times Up doesn't apply to librarians if the one voice speaking out about Me Too librarians has been silenced by Twitter.

I was defamed at #critlib by #NYC @cgps school librarian Ingrid Conley-Abrams @MagpieLibrarian who falsely claimed I harass women, I never worked in a library, I doxx librarians. Also, she exhorted people to censor me. She then mocked @jaslar @OIF for being called racist. #edchat pic.twitter.com/thl0vO2pum
— Dan Kleinman ❌ (@SafeLibraries) August 1, 2018

As of today it appears I am NO LONGER SHADOW BANNED.

That doesn't mean the underlying problem at Twitter has been resolved; I feel my writing this publication and spreading word about it has resulted in the lifting of the ban.


Meanwhile, the racist school librarian (working @cgps) who largely started all this years ago is still being racist and now misandristic, here against James LaRue of the ALA's Office for Intellectual Freedom:

URL of this page:
safelibraries.blogspot.com/2018/08/twitter-censorship-enables-harm.html