How ALA Plagiarism Becomes Truth Through the Media Lens; SafeLibraries in USA Today

SafeLibraries is in USA Today, Wednesday, 1 December 2010, page A3.  The article illustrates how American Library Association [ALA] plagiarism becomes the truth through the media lens.  See:

Here is an except:


Parents have long raised concerns about school and library books — children's and young adult books, and sometimes dictionaries — often for inappropriate content.  The number of reported challenges in the past 30 years has hovered between about 400 or 500 each year, says Deborah Caldwell-Stone, an attorney with the American Library Association.

Whereas challenges once were mostly launched by a lone parent, Caldwell-Stone says she has noticed "an uptick in organized efforts" to remove books from public and school libraries.  A number of challenges appear to draw from information provided on websites such as Parents Against Bad Books in Schools, or PABBIS.org, and Safelibraries.org, she says.


Here are the links:  PABBIS; SafeLibraries.org.  The story has been republished in other Gannett papers, such as the Daily Record.

Since I am involved in the story, let me point out an example of how the ALA misleads the media to propagandize the public.  I will explain how the ALA found someone's admittedly poor quality map of "banned books"—in reality 1963 was the last year a book was banned in the USA—then promoted it as its own.  The media then present the poor quality, plagiarized map as if it were high quality and reliably sourced.  Voilà, instant credibility for poor quality, plagiarized propaganda, now on page A3 of USA Today.

The online version of the story contains a "map of book bans across the USA" and attributes the map to the ALA.  It is the very same map that the ALA plagiarized.  Yes, stole.  See: "Books Under Fire," by Emily Brown, USA Today, 1 December 2010.  The USA Today map is attributed to "American Library Association; USA TODAY research."  It is substantially a copy of the ALA's version of the map.

But the ALA version of the map is plagiarized.  It is presented by the ALA as if it were its own map.  No attribution of authorship is given.  The inference, of course, is that the ALA authored the map.  It did not.  It was created by an individual who expressly disclaimed membership in the ALA:


I created the map that was the focus of Mr. Muncy's anger.  I have no affiliation with the ALA and took my marching orders from no manifesto, real or imagined.

The "censorship" map was, instead, an attempt by a private citizen to facilitate the free flow of information, in the hope that individuals might access it and make decisions for themselves.  Though the ideals of intellectual freedom may escape Mr. Muncy, I trust these are values that Americans everywhere value and understand.

Further, the true author of the map that the ALA plagiarized, who describes himself as "just some guy on the Internet," admitted the map is unreliable—"Is this map perfect?  Not even close.  I don’t actually like it very much. The model is all wrong":


In August 2009, a friend of mine named Alita Edelman - about to begin her senior year at Smith College - spent a month volunteering at the American Booksellers for Free Expression (ABFFE).  ABFFE is a tiny organization that operates within the long shadow of the American Library Association (ALA).  Her job was to organize data on banned and challenged books across America.  The ALA compiles these records, and every year releases a long list of what books were reported challenged where, by whom, and why.

The list is fascinating.  It provides an incredible window into the psyche of those who challenge books in public libraries (according to ABFFE, one sex education book targeted at girls was challenged in Texas for being “happily nonphallocentric”).

But what it doesn’t do is provide a environment within the data can be understood and contextualized.  It doesn’t allow for the abstract data (title, reason, result) to be attached to concrete touchstones like time and place.  It doesn’t, in short, do for books what WikiCrimes does for crimes.

So I created a Google Map for Banned Books.  I issued a strident call on my blog for contributors.  My dream was that librarians everywhere - from the New York Public Library to Podunk Public - would begin placing pushpins every time a parent held a copy of Harry Potter in front of their face, demanding that this instructional manual for witchcraft and wizardry be burned like its practitioners.  Of course, that didn’t happen, because I’m just some guy on the Internet, and not a media mogul with millions of eager readers with too much time on their hands.  Instead, Alita and I began the arduous task of translating the hundreds of ALA records onto the map.

Is this map perfect?  Not even close.  I don’t actually like it very much. The model is all wrong. These data, which tell us so much about who we are as a people, and to what extent we believe in deliberative democracy, are too precious and fragile to pass through so many filters and failure points.  I’m willing to bet that for every challenge reported to the ALA, a dozen more go unrecorded.  There are holes in our mosaic.  It’s a Magic Eye: the patterns are there, but distorted, visible only if you squint, and then only if you’re lucky.

Lest there be any doubt, the National Coalition Against Censorship identifies the true author of the map: "You can also view the latest map of book challenges across the US, created by NCAC’s newest board member, Chris Peterson."

This is an example of how ALA plagiarized propaganda is filtered through the media lens until it becomes the truth.  And the media are not even aware of this fraud.

And this is not the first time the ALA promoted its plagiarized map.  See: "It's Banned Books Week," by Carolyn Kellogg, Los Angeles Times, 28 September 2009:  "We're smack in the middle of Banned Books Week, an event sponsored by the American Library Assn., the American Publishers Assn. and others.  This year, they've launched an interactive map that shows which books were officially banned or challenged, and where, in 2008."  False.  Chris Peterson did, self-described as "just some guy on the Internet" who said, "Is this map perfect?  Not even close.  I don’t actually like it very much."  So the map's true creator admitted the map is his and is not even close to accurate. 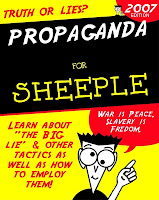 Now USA Today promotes, unwittingly, of course, a "map of book bans" as the ALA's that in reality was plagiarized by the ALA, is admittedly poorly prepared in the first place, and where no book bans have occurred in the USA since Fanny Hill in 1963.  Unwittingly, of course.  This is an example of how ALA plagiarism/propaganda becomes the truth through the media lens.  I informed USA Today Corrections and Clarifications of this, including the above evidence, but no correction appears to this point.

It is also an example of why media sources should not blindly accept ALA's statements.  I am available for media interviews.  This is especially important as the ALA plans a huge propaganda campaign in September 2011 for the 30th anniversary of "Banned Books Week."  I can provide balance with solid support, as the above opinion illustrates, and with a smile.

Fortunately, not all people are fooled by the propaganda.  The Daily Record story, for example, includes this comment:


This "banned books" hoax is pulled off by the far-left American Library Association every year.   All a book needs to make this category is for anyone, anywhere, to complain about it.  Libraries and schools have budgets and have to make choices.   I hope not using public funds to supply p[]rno to kids is a part of those choices.   These books are available at bookstore and online.  "Banned"?  Hardly.
12/10/2010 10:04:32 AM

It's now Banned Books Week 2018.  I see the plagiarized censorship map no longer appears on the Banned Books Week site and the original page gives the 404 error.  So terrific I helped, no matter how indirectly, to remove the plagiarized, sub-standard map.  ALA never suffered any consequences for the theft.  People assume librarians are angels.  Naturally, there have been other instances of plagiarism within ALA. 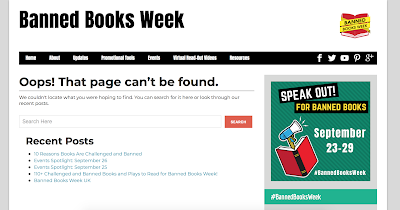 And I refreshed some old links with archived links.
Posted by SafeLibraries® at 3:28 AM