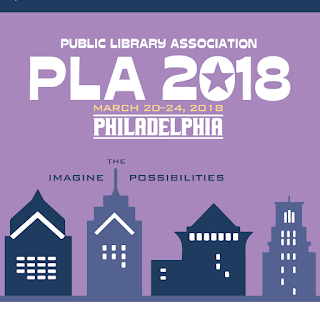 Today we learned Sally Yates used her considerable governmental powers to illegally violate the privacy of American citizens by subjecting them to illegal searches in violation of the Fourth Amendment of the US Constitution, among other violations.  Indeed, the invasion of privacy was so significant and so serious and so illegal that Sally Yates may be going to jail for having significantly participated in a silent coup against the American government. 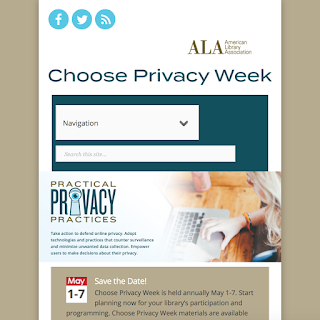 A core value ALA drives over and over again is privacy:

Along comes Sally Yates who has been proven beyond the shadow of a doubt to have used the full force and weight of the American government to, at a minimum, illegally violate the privacy of various American citizens under knowingly false pretenses:  "The FBI and DOJ obtained one initial FISA warrant targeting Carter Page and three FISA renewals from the FISC. .... Then-DAG Sally Yates ... signed one or more FISA applications on behalf of DOJ."

Normally I oppose disinviting speakers and have even criticized ALA for disinviting its guests in the past.  But this case is different.  Sally Yates is the very antithesis of ALA's core position on privacy.  She illegally used the full power of the United States government and its spy agencies to violate the Fourth Amendment rights of her victims.  She must be disinvited or she will have forever made a mockery of any claim that ALA is interested in the slightest in privacy.  Any librarian cheering her appearance at #PLA2018 is cheering Sally Yates's part in a massive scandal never before seen in the USA.

I know librarians will be reluctant to drop Yates.  So here, in the words of a Democrat, is the heart of what Sally Yates has done to illegally violate the rights of American citizens in a manner expected only by foreign, oppressive governments:


In the need to develop a capacity to know what potential enemies are doing, the United States government has perfected a technological capability that enables us to monitor the messages that go through the air. …. Now that is necessary and important to the United States as we look abroad at enemies or potential enemies. We must know, at the same time that capability at any time could be turned around on the American people.  And no American would have any privacy left such is the capability to monitor everything – telephone conversations, telegrams, it doesn't matter. There would be no place to hide.

If this government ever became a tyranny, if a dictator ever took charge in this country, the technological capacity that the intelligence community has given the government could enable it to impose total tyranny, and there would be no way to fight back because the most careful effort to combine together in resistance to the government, no matter how privately it was done, is within the reach of the government to know. Such is the capability of this technology. …. I don't want to see this country ever go across the bridge. I know the capacity that is there to make tyranny total in America.  And we must see to it that this agency and all agencies that possess this technology operate within the law and under proper supervision so that we never cross over that abyss. That’s the abyss from which there is no return.


Sally Yates was taking us over the abyss of tyranny before she was fired for insubordination by the President of the United States.  As Frank Church said in 1975, "no American would have any privacy left such is the capability to monitor everything." 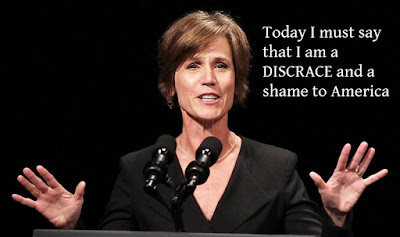 I understand Sally Yates was booked by ALA only weeks before today's bombshell exposing her tyrannical (as Frank Church put it) behavior:
But, given the paramount importance of privacy to all that is the ALA, Sally Yates must be disinvited from PLA 2018, else ALA risks forever being viewed as condoning a tyrannical effort to invade people's privacy in the very manner against which Democrat Senator Frank Church warned in 1975.

What Sally Yates did "is not just criminal but constitutes treason" worthy of "criminal prosecution against these traitors to our nation":

Hat tip to Jack Posobiec for teaching me about Senator Frank Church:

URL of this page:
safelibraries.blogspot.com/2018/02/sally-yates.html