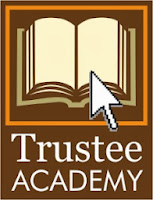 Virginia library trustee training has been turned over to the ALA's "United for Libraries's Trustee Academy":


"The Trustee Academy will enhance the Library of Virginia's existing online tutorials for trustees and will assist the trustees of Virginia's public libraries in carrying out their duties and responsibilities," said Librarian of Virginia Sandra G. Treadway.

Governor McDonnell, I am offering my assistance to help you to counteract this insidious means of misleading and controlling local communities in Virginia.  And you'll have to do this because the Librarian of Virginia has already shown where her allegiance lies.  Naturally she will deny what I have said, but the issue of the safety of Virginia residents is too important so set aside so easily.

Lastly, let me add that I am viewed as a "trusted source" on ALA misdirection by none other than the author of the Children's Internet Protection Act [CIPA].  CIPA requires filters in exchange for federal funding.  Please read this as it explains exactly how and why ALA misleads communities and what can be done about it:

URL of this page:  safelibraries.blogspot.com/2013/10/DearGovernor.html

Indeed, ALA supports the proliferation of Common Core:

But worse, way worse than standardizing sexualized books, is the massive censorship at the heart of Common Core.  To Kill a Mockingbird?  Gone.  The Great Gatsby?  Not so great.  "Squeezed off the syllabus."  From all schools.  Nationwide:


In Chris Kirchner's freshman English classes at Coral Reef Senior High School, novels like "To Kill a Mockingbird" and "The Great Gatsby" have been squeezed off the syllabus to make room for nonfiction texts including "The Glass Castle" and "How to Re-Imagine the World."  For the first time, students will read only excerpts of classics like "The Odyssey" and "The House on Mango Street" instead of the entire book.

Under Common Core, classics such as "To Kill a Mockingbird" and "The Adventures of Huckleberry Finn" are of no more academic value than the pages of the Federal Register or the Federal Reserve archives -- or a pro-Obamacare opinion essay in The New Yorker.  Audio and video transcripts, along with "alternative literacies" that are more "relevant" to today's students (pop song lyrics, for example), are on par with Shakespeare.

Another exercise devised by Common Core promoters features the Gettysburg Address as a word cloud.  Yes, a word cloud.  Teachers use the jumble of letters, devoid of historical context and truths, to help students chart, decode and "deconstruct" Lincoln's speech.

In contrast, ALA opposes the "censorship" of To Kill a Mockingbird.  Here are just a few examples:

Think about this.  ALA supports Common Core but ostensibly opposes censorship, something Common Core now does on a massive scale.  So ALA rightly supports To Kill a Mockingbird while Common Core wrongly "squeezes it off the syllabus."

Will ALA now drop its support for Common Core?

I predict it will not, given its promotion of sexually inappropriate material for children is real and its opposition to censorship is only for show.  Here is just the latest example of ALA censorship and even blacklisting:

Hat tip to Diane Ravitch for making me aware of this massive Common Core censorship.  "Education reformer Diane Ravitch says that the standards have been adopted 'without any field test ... imposed on the children of this nation despite the fact that no one has any idea how they will affect students, teachers, or schools.'"

Updated a link to the correct link for the Sarah Carr story.

This just in, as another example of another national group addressing that odd case where a school "bans" reading material. And again I predict silence about Common Core's censorship of the very same book nationwide, this time from the NCAC:

URL of this page:  safelibraries.blogspot.com/2013/10/CommonCore.html

School iPad disasters are becoming more and more evident.  A Colorado school district advised the new Apple iOS7 upgrade wiped out all existing technology protection measures requiring the school to collect the iPads from students before they go home:

That sounds like a school iPad disaster to me, and I'm happy but sad to break that news.

Here's another, in California:
Oh boy, this is bad.

I have more breaking news on the MSSD14 situation.  iPads have been restored to the students.

Quoting one of my sources from yesterday:  "My school district, Manitou Springs Colorado MSSD 14, as of this day has apparently resolved the IOS 7 problem and has allowed students to take computers home today, presumably because the computers have restored operational content filter technology."

On the other hand, in Los Angeles, it goes from bad to worse.  Look at the LAUSD's superintendent's latest tweet touting how supposedly transformative are the iPads in a child's education:

In reality, good schools like those in South Korea, don't use iPads, at least not like LAUSD uses them:

Considering the current debacle, no wonder Superintendent Deasy has stopped tweeting to this point.

So just in case he gets embarrassed and deletes his latest tweet (27 Aug 2013), here's a graphic: URL of this page:  safelibraries.blogspot.com/2013/10/SchooliPadDisasters.html