The American educational experience is transforming at a fast pace.  Parents from shore to shore are being outpaced by technology and school districts sending students home with portable computers that are not only cutting edge for technology but prepackaged with unrestricted Wi-Fi Internet access.  Rapid deployment of such devices comes with temptations and dangers.

Now there is a model for a more effective means to protect children, thanks to concerned parents in Manitou Springs, Colorado.  They worked with the Colorado legislature to tighten school technology laws to require schools to address technology concerns everywhere, not just on school grounds.  Similar changes can be made in the laws of other states so more children are better protected from harm.

The vast majority of public schools have complied with the federal Children’s Internet Protection Act (CIPA, enacted 2000, found constitutional 2003) that requires “protection measures [that] must block or filter Internet access to pictures that are … obscene … or … harmful to minors (for computers that are accessed by minors).”  (N1)

Among districts that provide students with portable devices, a small minority have taken the expedient but imprudent position that school owned portable computers are exempt from CIPA requirements once the children leave school grounds, and that parents must accept exclusive responsibility for the monitoring of children using such unfiltered devices doing school work away from school grounds. 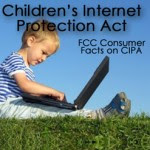 Kids around the nation have already suffered in districts that fail to provide CIPA protections on portable computers away from school:

Despite a petition from the parents and written opinions from two attorneys validating parental objections, the Manitou Springs school administration held firm, insisting that the school had no responsibility for protecting student use of portable devices away from school grounds.  (N6) 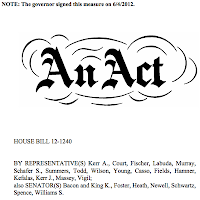 These determined parents then sought the intervention of the Colorado legislature.  As a result, Colorado Senator Keith King sponsored new legislation that was signed into law by Colorado Governor Hickenlooper that explicitly requires portable content filtering protections for all students in Colorado, specifically adding the key language, “from any location,” among other things:

"No later than December 31, 2012, the governing body of each district shall adopt and implement a policy of internet safety for minors that includes a technology protection measure for each technology device provided by the district that allows for access to the internet by a minor from any location.”  (N7)

With this 2012 legislation, Colorado became the first state to create law that explicitly requires that the protections required by CIPA must also protect students using school issued computers that are now increasingly portable and capable of accessing Internet networks from any location, not just at school.  And the parents love it:  “No law will completely shield our kids from all the bad stuff, but I was glad to see Colorado lawmakers side with parents and make it clear that if a school sends kids home with computers, they must make them reasonably safe for the kids to use,” says Manitou Springs parent/guardian Jim Sayner.  (N8)

Now aware of the documented damage that unrestricted Internet access has already visited upon school children, state legislators, school boards, and administrators across the nation will perhaps adopt and implement similar common sense law to enhance the prospect of the safe and beneficial use of the vast resources technology brings to students.

At least now, the parents of Colorado children who experience such illicit mayhem on inadequately protected portables will have substantial new recourse under this new and timely law.

Note:
Colorado also has its own CIPA law (CCIPA) (see N7 below)—it was CCIPA that was amended as a result of parental action.

Note:  Colorado’s information has not yet been updated at that site.

URL OF THIS PAGE: