At least one community member recognized the problem and stood up to try to do something about it.  As a result of her work the local government refused to reappoint a number of library trustees.  The board president herself was removed as well.

That said, the ALA propaganda was effective on the library board as constituted at the time, so the community remained exposed to harm it would have been legal to control.  And here we are today, with pornography flowing over the library's WiFi system so much that the federal government fined the library:

Remarkable, especially given this WBCML library's history of defending its anything-goes policy:


Due to illegal downloads and fines,
the West Bend Library is eliminating wireless access
to all laptops and mobile devices.
When a practical solution can be implemented
we will resume wireless service.

Will the community finally jettison the harm done by the ALA?  Maybe the WiFi fine will provide some motivation.  I call upon the library to publicize the letter advising the WBCML of the federal fine.

"Acceptable Use" Policies are Absolute Failures

By the way, this matter illustrates once again the absolute failure of library "acceptable use" policies.  WBCML had a "Wireless Internet Access" policy: "Users are expected to comply with the Library Acceptable Internet Use Policy."  Did that work?  No, and that's why the library got fined.  You see, the ALA advises libraries to use acceptable use policies and not Internet filters.  Given the ALA's heavy involvement in this community and quiet grants, perhaps the ALA should pay the fine.

"The Library is not responsible for the content of websites or email accessed through the Library network."  Given the federal fines, that statement is patently false.  As are many of the library's other policy statements.

If your library is relying on policies instead of filters to control illegal activity, your community may be next up for a federal fine.  You don't have to sit back and let that happen.  Contact me or Safe Schools, Safe Libraries Project if you would like assistance in restoring local control to your public library.

Two additions of note.  First, a comment on the Boots & Sabers blog from one of the library's trustees in response to the blog and quoting another comment.  Second, an email to a radio personality from the person who raised the alarm many years ago.

Comment by WBCML Board of Trustee Member Matt Stevens:

We are paying the fine per recommendation of the city attorney.  My understanding is that charter verified the download took place.  The addition of the webfilter is two-fold.  Stop most users from doing anything illegal, and give us logging capabilities so we can verify something took place should this come up again (and depending on the filter, possibly give us the ability to identify the offender).


Article also notes that Library Board member Matt Stevens will donate his services to help set up the web device that will reduce the chances of this happening, so that this outage of access will not be unnecessarily longer than it needs to be.  A big shout-out for that!

Thank you.  The library is important to me, which is why I'm on the board in the first place.  I think the library could find volunteers for other various needs as I know there are many who care about the library too.

In addition, we also were able to almost 0 balance our budget last night thanks to the fantastic work of Sue and her staff.  They worked hard, came up with ideas, and we approved a plan that will balance the FY2013 budget save maybe a few thousand dollars, which will come out of the reserve fund.  That's far better than the $60,000+ deficit we started with.  I'm guessing another article in the daily news this week will cover the details, but we were able to make the adjustments without cutting services or eliminating any positions.  We did increase the late fees slightly, the copy fees slightly, etc as well, but the fees are all still very low and in-line with other libraries in the area.

This is exactly what West Bend Citizens for Safe Libraries predicted, and fought against.  Why did we lose?  Because bully outsiders, people who don't live in our community and by our community standards, came to West Bend and shouted down the local parents and taxpayers to get their way.  People like the wealthy, uber-liberal American Library Association, Wisconsin Library Association, Office of Informational Freedom and, of course, the biggest crybaby bully of them all, the ACLU.

Now we have perverts using our taxpayer-funded WiFi to download porn in West Bend.  Nice.  Guess what?  They're looking at it on the hardwired taxpayer-funded computers, too.  How do we know?  Because we filed an ORR three years ago and have copies of police reports and complaints.  No surprise here, though.  This is the now the standard, the norm, instead of a rare occurrence.  These stories are in the paper all the time across the nation because goons like the ACLU and the ALA insist that folks like us shouldn't get to say what we will and will not pay for, and put up with, in our local communities in the glorified name of censorship.

Three years ago the citizens of West Bend said NO.

We asked for filters on the computers in our library - the library board said "no."

I've included an article (with the link) below for you that was written by Dan Kleinman of SafeLibraries, a national organization that exposes the American Library Association for what it is - a porn-pushing, liberal,  immoral, George Soros buddy of an institution that intimidates and censors small-town folks.

West Bend is better than this, and it is a sad reflection on the morals and values of the folks who live here.  But don't let it be said that we didn't try.  We did.  But they came, they bullied, and they won.

Article in entirety below:
.... 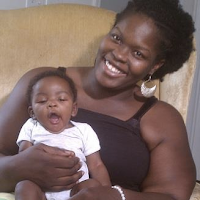 A mom has exposed her breastfeeding fiasco in a public library.  Below is the incident as played out on Twitter.  This involves mom Kelle Pressley @QCSuperMOM in the Charlotte Mecklenburg Library @CMLibrary.  Then I stepped in @SafeLibraries, responded to both the library and the mom, and encouraged the mom to write about the incident, which she did.  Basically, the library did not follow state law when it asked the mom to move, it sort of apologized, and the mom has commented on the apology.

Note:  I give the library credit for engaging with people as it did on Twitter, Facebook, and elsewhere.  Contrast such honesty and openness with the silence from the Lancaster Public Library for censoring a book teaching children to recognize and report s3xual abuse because it has a Christian tone.

Be sure to read what the mom wrote about the incident—here's just an excerpt:
"Wow!" is right!  Did you know many libraries allow pronography despite the law and sometimes when people complain, the complainer is asked to move?  One library even kicked out a mother for complaining about someone viewing child pronography!  Another library destroyed the evidence of the presence of someone viewing child pron.  And a breastfeeding mother is told to move despite the law allowing public breastfeeding?  Wow.

At least the library apologized, though it was one of those apologies that actually places the blame on the victim ("if you felt uncomfortable") and conveniently changes the facts ("simply to offer her the option"): "The Library apologized if she felt uncomfortable at any time during her visit to the Library....  The intention of Library staff in approaching her was simply to offer her the option of a private space, not to interfere with her ability to nurse her child." 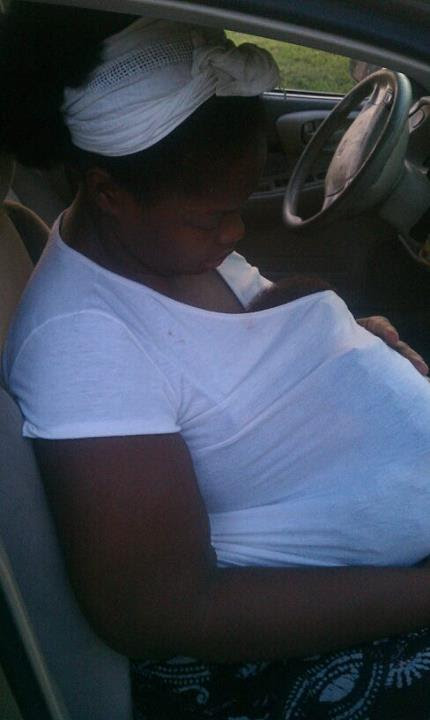 Clearly Kelle Pressley (a.k.a. Kelle Perkins) appreciates my assistance in this matter.  I say this because I offer to help anyone having any problems with public libraries.  Here's one of our conversations, depicted below: 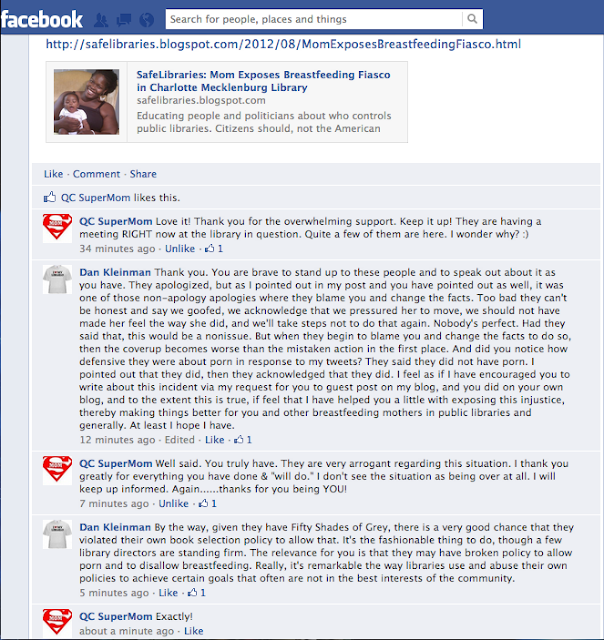 I just found out it's NATIONAL BREASTFEEDING MONTH!  Nothing like getting treated rudely by a library for breastfeeding in a library during National Breastfeeding Month!

In response to a tweet of mine to #libchat so that librarians can discuss this breastfeeding harassment case, the Charlotte Mecklenburg Library responded that it wanted to take part in that conversation, then it blocked my ability to follow it on Twitter.  1) What is it hiding, and 2) Why is it denying my free speech?


I could tell I was blocked because I could no longer see its tweets and it simply said "Private Account."

Remarkably, while writing this note, and within minutes of my tweet minutes ago about having been blocked, the library has re-established my ability to follow and has followed me.  I'm willing to say this was an accidental block based on the library's tweet in response, unless "untrue" pertains to the issue of harassment, not to the block.
.
.
.