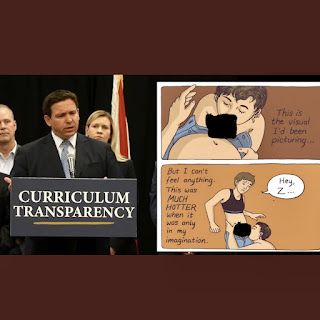 Library associations lie to legislators and the public to cover up school librarians grooming children.  But people are waking up to this.
For example, the Idaho Library Association lied in defense of continuing to allow school librarians to make graphic pedophilic literature available to school children.  A legislator called out the lies and as a result the Idaho Library Commission lost $3.5M in funding.  People are realizing if you stem the flow of money to groomers, you can indeed act to slow their ability to groom.
The grooming is so bad that even state governors are acting to stem the harm to children that school librarians trained by American Library Association (ALA) are doing, as illustrated top right.
Lesson learned: research and think carefully about the excuses librarians are using to perpetuate their ability to harm children, then use their words against them to deny them funding for continued grooming.
A report from Idaho provides an illustration of the above: “On Thursday, Rep. Julianne Young (R-Blackfoot) shared an email from the Idaho Libraries Association from March 2.  Young said it contained ‘a number of false and misleading claims about the content and potential effects’ of House Bill 666 – a proposal that would’ve made it a misdemeanor for librarians to lend any material deemed ‘harmful’ to children.”
Source: “5th Time's a Charm: Idaho Legislature Passes Library Commission Budget,” by James Dawson, Boise State Public Radio News, 26 March 2022.
So, the Idaho Library Association lied and the Idaho legislator called out its “false and misleading claims about the content and potential effects” of an Idaho House bill (Idaho HB 666).  People are waking up, but not the kind of woke ALA wants.  “‘This is conduct that is unprofessional, it is disingenuous, and in my mind, it is unacceptable,’ Young said of the email Thursday.”
And she’s absolutely right.  Other legislators should similarly look at the “conduct that is unprofessional, … disingenuous, and … unacceptable” by their own state library associations and librarians, let alone ALA.
The content for which librarians are acting so unprofessionally?  It’s grooming content so bad Florida Governor DeSantis spoke out specifically against it, displaying images from a book called “Gender Queer: A Memoir” so pedophilic they had to be blacked out in areas and media will not even show them.  The problem is so bad that it’s festered to the point where state governors are now having to act since so many are frozen by the assumption librarians would never harm children.

These are books school librarians are giving to America’s children.  ALA gives them awards (Stonewall Book Award, 2020, Gender Queer) precisely to help librarians spread them further.  They are award winning!  They are protected by ALA’s so-called “Library Bill of Rights” that prevents librarians from making “age” distinctions!  It’s the First Amendment!  “FReadom”!  “We believe that school libraries do not have obscene or pornographic materials and using these terms to describe books, singular words, or small portions of a book is a tactic to undermine the value of books, public education and educators, particularly school libraries and school librarians.”
Know that ALA trains librarians, “A librarian is not a legal process. There is not a librarian in the county—unless she or he is a lawyer—who is in the position to determine what he or she is looking at is indeed child pornography.”  It’s like they don’t know what a woman is because they are not biologists.  The people need legislators to act in the face of librarians who are the cause of the problem and who target children with “conduct that is unprofessional, … disingenuous, and … unacceptable.”
Just days ago ALA held a librarian conference where librarians were specifically trained to defy parents and legislators. Look how they lie:

“This is not an accident. What we’re seeing today reflects planning,” noted Caldwell-Stone. The “perfect storm” of the last few years (pandemic, political division, social media, and virtual meetings) has led to local and national attempts to exploit divisions and fears. These attempts also raise moral panic about false claims of pornography, critical race theory (CRT), marxism, and more. School and library board candidates are running on book banning platforms.  Politicians and organizers portray libraries as “dens of iniquity” and librarians as worse.

Source: “Censorship Preparedness at #PLA2022,” by Alec Chunn, ALSC Blog, 25 March 2022.
So while the ALA leader decries “attempts to exploit divisions and fears,” she exploits divisions and fears about “book banning” and “dens of iniquity,” all to make more graphic pedophilic literature available to more school children.
Even members of library boards of trustees who don’t toe the ALA’s groomer line are attacked as homophobes and war criminals, talk about “raising moral panic”: 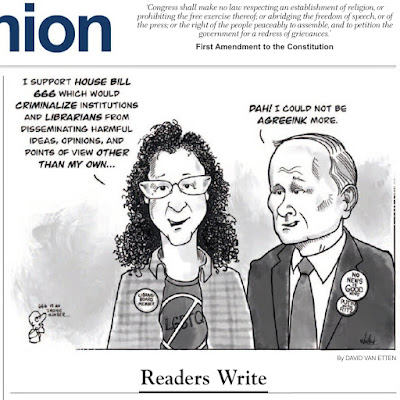 Source: Coeur d’Alene Press, Friday, 18 March 2022
So, legislators, since librarians will not voluntarily stop giving children graphic pedophilic literature—quite the opposite, it’s getting worse—you can stop funding them and their groomer activities, as Rep. Julianne Young and fellow legislators have just successfully done.  Don’t give money to people grooming your children, even if they serve a once venerable public role.  Carefully research and examine the excuses librarians use to perpetuate their harm to children, then use their own words to deny them funding for continued grooming.

—
URL of this page:
safelibraries.blogspot.com/2022/03/library-association-caught-lying.html