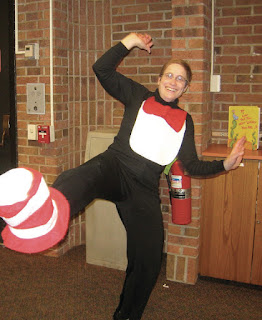 Age discrimination in libraries?  It appears so.

Notice the sad way the information came out: "Levin herself spoke at the commission meeting of her retirement, and painted a different picture of her release from the library system."  Then the library attorney attempted to silence her.

No library media has yet written about her, other than my own.  Library associations like the American Library Association are too busy addressing non-library issues, like how to train school children to resist President Donald Trump or how to position librarians against "stand your ground" gun laws.

Read the full story at this link, followed by more information and policy analysis:

BRIDGEWATER, NJ - After 25 years as a librarian in the Somerset County Library System, at the Bridgewater branch, youth services librarian Carol Simon Levin submitted her retirement papers in January.

News of her leaving the library system caused uproar from parents and library system employees who have benefited from her services over the years, and several turned out to the county library system commission’s meeting Jan. 10 in protest.

“I have had the pleasure of working with Carol, and she is light years ahead of me in terms of creativity,” said Somerset resident Lawrence Sapienza, who retired from the library system in April. “She is a wonderful asset to the staff, as well as the public.”

Several people spoke during the commission meeting of Levin’s service to the public and the programs she has spearheaded for children in her position as child services librarian. They expressed their sadness over the loss.

“My child has been coming to the library for 10 years, and comes to story time,” said Bridgewater resident Jodi Golden. “She cried when I told her Carol was leaving.”

Another Bridgewater resident said she has been bringing her children to story time for years with Levin, and the quality of her programs is far superior to those in any other library she has visited.

And still another Bridgewater resident said she has admired Levin’s dedication and intelligence in the field for 25 years.

Resident Atulya Chaganty credited the library, and Levin, with helping her become who she is today, a graduate with a masters degree in industrial design from the Rhode Island School of Design.

“My family moved to this town when I was 10, and we did not know anyone or have a lot of money, so we found refuge in the library,” she said. “We went to every program, got to know our librarians and I even logged the most hours as a volunteer during the summer reading program during my middle school and even some of my high school years.”

“This library made me who I am because of the librarians,” she added, “librarians like Carol, who taught me so many things, not just about reading, but about life.”

Chaganty said she has seen changes in the library over the years, from old computers to limited decorations in the children’s department and a lack of librarians available on Sundays.

“(And) they ended the career of one of the library’s last living legends, Carol Simon Levin, a woman who has dedicated her life to this community,” she said. “Incredibly educated, compassionate and committed to everyone she meets, she does not even need to know you to invite you into her home and welcome you into her life. These actions all symbolize to me a culture shift I am not happy to witness.”

For many, although they will miss Levin’s programs and her presence in the library, of biggest concern was the apparent way in which she left her position in the library system.

According to Brian Auger, administrator of the Somerset County Library System, Levin submitted her retirement from the system, which was accepted.

In the case of a retirement, according to the bylaws of the library system, there is no vote taken by the commission, the retirement is accepted by the director only.

Auger said that according to the bylaws for the library system, the administrator is in charge of executing policies, dealing with personnel and a host of other responsibilities.

In the case of personnel issues, Auger said, he has the ability to terminate an employee, who then is able to file a grievance if they believe they were wrongfully terminated. At that point, he said, the commission would get involved to do an investigation regarding the termination.

Because Levin submitted her retirement, Auger said, the commission did not have any say in the situation.

“I don’t begrudge anything, they meant well from their perspective,” Auger said of the people who spoke out on Levin’s behalf during the commission meeting. “They came out and spilled their hearts and told us what they thought.”

“But there are two sides to a story, and when it is a supervisors’ side, we must remain silent,” he added of the commission’s decision not to comment with regard to a personnel issue. “All they know about Ms. Levin is that she is a great librarian, does great story times, she is positive and upbeat and the kids love her programs. There are two sides to every story, but she is retiring.”

But the side of the story that the commission could not comment on during the meeting was what was so troubling to many members of the public.

“I had just become aware that Carol was retiring, so to speak,” Sapienza said. “Sometimes it’s not always by choice, and that is, I fear, the case here.”

“When an employee of 20 plus years is put in that position, sometimes I think the commission needs to get involved,” he added. “This is one of those cases. She is a remarkable lady, and I hope that the commission might take time to talk to Carol to see if this is something she wants to happen.”

Levin herself spoke at the commission meeting of her retirement, and painted a different picture of her release from the library system.

“I did this because, after 25 years of consistently exemplary reviews from my supervisors on the quality of my programs and reference transactions, and many appreciative letters sent to supervisors from happy patrons, I was presented with termination documents and told I would be fired if I did not accept retirement and sign away all my employment and legal rights,” she said.

Levin said the charge was insubordination, although the commission’s attorney requested her not to continue speaking on that because it was  personnel issue that is not permitted in a public forum without a signing of a RICE notification that allows an employee’s status to be discussed in open session.

Levin said, after the meeting, that there were a number of incidents that led to her leaving the system, beginning in April when she reported that she found it surprising none of the programs from the library system were appearing in the “Courier News” newspaper. She said she was reported and received a notice that she would have her duties reduced to reference desk and regular story times, as well as the elimination of her display in the lobby.

In October, Levin said, she violated those terms when she put up a display on the “Day of the Dead” an in almost empty space where the Halloween books had been, rather than in her allotted space. In the ensuing days, she said, she was cited for a violation again when she put up a poster for Books for Kids on the children’s reference desk, using one from several years ago instead of one that was new.

“It distresses me mightily that I have been asked to leave over a series of events that had to do with publicity and marketing,” she said. “What bothers me most is this is a pattern, it’s not just me.”

Levin said she has heard from others who value her work, and has worked with patrons, teachers and others to help them find books and more.

Levin said that in order to retire, she was required by administration to sign away her ability to ever work again in any library with the Somerset County Library System.

“Though I would have loved to continue creating innovative programs for Bridgewater library youth patrons and helping them, their parents and their teachers find information and great reads, I am not able to do so,” she said.

Auger maintained that Levin had submitted her retirement papers, and there was nothing he or the commission could do in the matter of her employment. He declined to comment on any of the statements made by Levin regarding termination at the commission meeting, citing personnel privacy.

But Levin said she is disturbed that this all came about because she spoke out.

Still, for many patrons of the library, the loss of Levin will be felt by all, young and old.

“I realize this situation is extremely complicated, and we all have a tainted view on what happened,” Chaganty said. “No matter personal feelings, those in power must maintain some professionalism, respect and dignity. Many of us gathered in support of Carol not to reinstate her position, but because of the lack of respect that was shown to a woman who is a 24/7 librarian.”


Here are additional sources for context/information.

Notice library policies prohibit age discrimination in employment and in what children may view generally and specifically on the Internet, in which case only parents may discriminate:

Access to computers and the Internet is available to all library customers. However, this service may be limited any time such use is not consistent with the policies of SCLSNJ. Parents and legal guardians for people under 17 years of age assume responsibility for their children’s computer and Internet use by signing their child’s library card application.

URL of this page:
safelibraries.blogspot.com/2018/01/age-discrimination-in-libraries.html