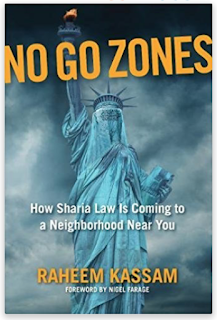 Banned Books Week is a hoax.  The latest example is the censorship—by public librarians—of yet another book the American Library Association will never list on its annual "banned books" list. I have proven in the past:
but let's look at the current incident, another in a long string.

"No Go Zones: How Sharia Law Is Coming to a Neighborhood Near You" is a book by Raheem Kassam, Editor at Breitbart London, published a few weeks ago on 14 August 2017.  It is the Amazon #1 Best Seller for Islamic Law.  It is on Publisher's Weekly's Top 25 Hardcover Nonfiction list.  Libraries are now beginning to stock it.

Rebecca Eaton, Adult Services Librarian at Warren County Public Library District, Monmouth, IL, has chosen not only to censor the book, but also to brag about the censorship to tens of thousands of other ALA librarians on an open Facebook group.  And notice the mocking of her own community:


Ok, guys. Liberal librarian in a rural community here. My heart is really hurting today. I am in charge of acquisitions for our adult collection, and I saw this book on Publisher's Weekly's Top 25 Hardcover Nonfiction list. I know that I need to be aware of my bias and not censor information, but it honestly brings tears to my eyes to think that I should probably purchase this for our patrons. Has anyone else had to purchase a book for your library that makes you want to cringe or hide in a corner to cry?

UPDATE: I decided against purchasing it, and I am keeping my fingers crossed that no one requests it. And if someone does request it, the answer is no; I cannot argue with them about whether or not the library should own it. I must honor my patron's request. But I will do so with an eye twitch as I awkwardly smile and comply. The eye twitch counts for something, right? 😅

:( I've been trying my best to create a balance between my liberal and conservative choices, but some of the new releases are rather upsetting. If I don't order this, past experience tells me that a patron is going to request it anyways


Usually if someone requests a book like this, I smile and remain silent, and make a mental note to never engage with this person in public.


I decided against purchasing it, but it was some sort of Fox News recommendation

🙄 Meaning that if one of our several patrons who get their political insights from Fox News happens to come across it, then...it will come to my desk as a request

Meanwhile, many other librarians piled on, against the author, again the book, against other authors, including Milo Yiannopoulos, and even against "Islamophobia," like this former University of Iowa librarian:


This book is based on lies and the idea of no-go zones has been debunked by the governments of the nations that right-wingers claim have them. Keeping in in the library would be a mistake, and a cave-in to hatred and xenophobia and Islamophobia. If a Nazi wants the book, let him buy it himself and not use taxpayer dollars for it.

Notice that all readers of conservative books are Nazis: "If a Nazi wants the book, let him buy it himself and not use taxpayer dollars for it."

But they loved Antifa books: "You should get this as an opportunity view. Antifa: The Anti-Fascist Handbook."

These are the people in charge of your public libraries.  These are your official government censors. They appear as helpful librarians.  But they mentally sidestep censorship by calling it "selection" from approved lists.

Even Judith Krug, the creator of Banned Books Week, said:


Another thing we have to be real careful about is that even though the materials that come out initially aren’t wonderful, it’s still incumbent upon us to have that voice represented in the collection. This was exactly what happened in the early days of the women’s movement, and as the black community became more visible and began to demand more materials that fulfilled their particular information needs. We can’t sit back and say, “Well, they’re not the high-quality materials I’m used to buying.” They’re probably not, but if they are the only thing available, then I believe we have to get them into the library.

So Raheem Kassam's book gets criticized for the very things BBW's creator said libraries must include anyway.  Yet his book gets censored.  For example, one librarian said, "I got a patron request for a similar title a few weeks ago and I was able to say no because of a lack of professional reviews."  That librarian is obviously oblivious to what ALA's Judith Krug said, but it's a convenient excuse to censor books librarians personally oppose.

The point here is Banned Books Week is proven to be a hoax yet again.  It won't list "No Go Zones: How Sharia Law Is Coming to a Neighborhood Near You" as a banned book.  It certainly won't list that librarians banned the book and bragged about such censorship to each other.  Banned Books Weeks is this very month and there will be zero mention that Rebecca Eaton, Adult Services Librarian at Warren County Public Library District, Monmouth, IL, banned the book, bragged about the censorship, and many other librarians piled on.

Anyway, the book is now a "banned book" officially censored from at least one public library.  So I'm going to go buy it, and I hope my readers do as well.  Sometimes fighting censorship is easy.  In this case, buy "No Go Zones: How Sharia Law Is Coming to a Neighborhood Near You."  Your librarian doesn't want you to read it.  Find out why.  Then recommend your library carry the book.

Here is the entire Facebook conversation to date, http://tinyurl.com/NoGoZonesCensorship, since ALA makes it a regular practice to delete—or censor—conversations they don't want the public to see.

Finally, here's a list of banned authors, according to that ALA censorship brag:
—

The trigger finger on censorship fires again, from the nation's self-arrogated censorship police.  Did you notice I archived the Facebook page in question at http://tinyurl.com/NoGoZonesCensorship?

Did you see I said, "Here is the entire Facebook conversation to date, http://tinyurl.com/NoGoZonesCensorship, since ALA makes it a regular practice to delete—or censor—conversations they don't want the public to see."?

And ALA deleted the page—on the same day I published this reportage.

I suspected ALA would be embarrassed by this public exposure of how it practices censorship of conservative authors (and promotes Antifa fascism) on a daily basis, especially in the weeks before the annual Banned Books Week hoax begins.  And sure enough, this very same day that I published the post, the Facebook admission of censorship has itself been censored.  Completely removed.

Here's how it looks now:

Banned Books Week truly means absolutely nothing to the people who created the hoax week.  They are censorship experts!  They practice censorship every single day!

Diversity of thought?  Perish the thought!

They will continue to censor conservatives and conservative thought and conservative books daily (just like they never invite conservative speakers to any ALA conventions), they just won't be so stupid/oblivious as to brag about it in public then be forced to censor themselves.  After all, Rebecca Eaton is a newbie, having just been hired just two or three months ago in June or July 2017.  This censorship will help her and other librarians learn they should not speak publicly how they regularly censor political topics and people they oppose politically.  The ends justifies the means!  "Libraries Are Not Neutral Spaces"!


URL of this page:
safelibraries.blogspot.com/2017/09/no-go-zones-censored-banned-books-week.html