ALA Pays West Bend Personal Visit to Ensure Children Retain Access to Inappropriate Material; ALA Desperate Due to Major Defeat 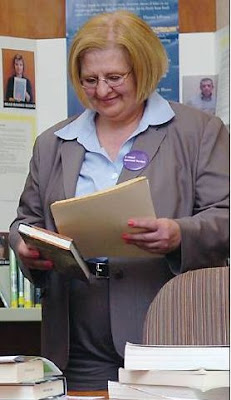 The ALA's new de facto top leader has paid a personal visit to West Bend, Wisconsin, because the ALA knows it is losing its propaganda battle to ensure children retain access to inappropriate material despite the law, common sense, and community standards.

There she is, pictured to the right. That's the person so frightened that West Bend is showing the way for communities nationwide to throw off the ALA's yoke that she has to make a personal visit—wearing an "I read banned books" button, no less. As Thomas Sowell would say, "Hogwash"!

She made comments online about me personally in which she said I was misrepresenting her and the ALA. I was not. So I supported my statement with a direct quote from her, in her own voice, from her own web site. But "dcs" was silent after that, just like Ginny has gotten no response that caused the Council to act as it did in ousting the non-responsive library board members, and just like the NCAC refuses to respond to my simple questions after it too directly addressed me.

So the ALA president wrote a totally misleading and propagandistic piece in an effort to fool the West Bend government into doing what the ALA wanted, not what the community wanted.

I wrote to the government telling them exactly how the ALA was misleading them. I have no idea whether what I wrote made a difference, but the government ruled against the ALA's advice and choose to support the community instead.

That simply will not do. The ALA cannot allow any single community to defeat its policy and defy its propaganda. If it did, other communities might realize the truth that the ALA is a paper tiger peddling false information. But with the local government deciding twice to refuse to reappoint people the ALA supported, the ALA was forced to do something.

In walks Deborah Caldwell-Stone, an attorney and now the ALA's de facto leader after the passing of the previous 40-year one, Judith Krug. It was Judith Krug, a former ACLU leader, who changed ALA policy from what it used to be, protecting children from inappropriate material, to what it is now, namely, anything goes and only individual parents can stop their own children from inappropriate material.

You know what is really outrageous about this? The ALA continues to push its policies on local communities despite having lost on this very issue in the US Supreme Court in 2003. What once used to be a theory that might have been legitimate lost its legitimacy when the ALA lost on the issue six years ago. Yet the ALA continues to insist that anything goes.

In US v. ALA, the US Supreme Court said, "The interest in protecting young library users from material inappropriate for minors is legitimate, and even compelling, as all Members of the Court appear to agree."

Contrast that with the ALA and Deborah Caldwell-Stone. They say the exact opposite. They say protecting young library users from material inappropriate for minors is not legitimate and not compelling. They say it is actually censorship. They sell items decrying banned books, including ones seen in the picture below and to the right, although no books have been banned in the USA for about half a century. Yes, books are challenged and moved or removed in individual venues, but usually for legal reasons, such as in observance of another US Supreme Court case, Board of Education v. Pico.

The ALA is so off base that it is even seeking to force another local community, this time in Miami-Dade County, FL, to accept material that is factually false. An appeals court ruled the "right to apply accuracy" controls. Nope, that doesn't stop the ALA. The ALA is now working with the ACLU to force public schools to accept intentionally inaccurate material, as determined by the community and the courts.

Did Deborah Caldwell-Stone get involved in that? Absolutely. "Naturally we are disappointed with this decision. The book ban is unconstitutional, and we will continue to support the ACLU’s efforts to return the books to the shelves of the Miami-Dade school libraries." So the people of Miami-Dade County wanted the book out, they used legal means to remove it, an appellate court supported and affirmed the people's decision, but the ALA and the ACLU still join together to force the community to submit to their will. Sound familiar, West Bend?

In summary, what the US Supreme Court says is legitimate and even compelling, the ALA says is censorship and banning. What Ginny and about a thousand others say is common sense, the ALA's top leader and Maria say is illegal.

As syndicated columnist Cal Thomas said many years ago in the context of public schools:

The ALA counts as book-banning efforts by parents to become involved in their children's education by raising questions concerning age-appropriate material. If parents raised such objections in connection with what type of food is being fed their children in the school cafeteria, they would be regarded as interested in the welfare of children. That they occasionally raise questions about the quality of intellectual "nourishment" at the school qualifies them, according to the ALA, as book-banners.

As former ALA Councilor Jessamyn West said, "the bulk of these books are challenged by parents for being age-inappropriate for children. While I think this is still a formidable thing for librarians to deal with, it's totally different from people trying to block a book from being sold at all." Totally different.

So, citizens of West Bend, decide for yourselves what's right for your own public library. The ALA says the opposite of what the US Supreme Court says. Further, the US Supreme Court is merely restating common sense when it says it is okay to keep children from inappropriate material. Yes, the decision as to what material is inappropriate will not be easy to make, but that does not mean it should not be made at all.

Look at the law and the facts and do what you know is right and legal and already done in many other communities. Don't let red herrings about LGBT issues or slippery slopes or the difficulty of making decisions sway you. Your children are at stake. The nation is watching.

The event was intended to show support for the library staff and to demonstrate opposition to a local demand that certain books now in the Young Adult section of the library be moved to the adult section and labeled because of their sexual content.

Jurss, 20, and a student at the University of Wisconsin-Madison, said more than 50 people walked three blocks with him from the corner of Oak Street and South Fifth Avenue to the library to start the demonstration of support.

“There were 20 or 30 more waiting for us at the library,” he said. They were coming and going, but I’d say there was over 100 people (participating).”

A West Bend resident, Jurss used a Facebook social networking site on the Internet to suggest the event. Within two hours of posting his invitation, responses came in, he said.

“I was surprised by the overwhelming support immediately. After that, I guess I became the ring leader,” Jurss said.

“This read-in is a demonstration and an educational event,” Jurss wrote in response to an e-mail query from the Daily News. “We hope to educate the public on various books that have been questioned in America. What has occurred in our library is not an isolated event. Books such as the Harry Potter series, Catcher in the Rye and Huck Finn are famous examples of books that have been pulled from library shelves or marked as dangerous books.

“After reviewing the issues many libraries and school successfully defeated efforts to restrict access to the books. It is our hope to do the same. We want to keep books open and available within the public library.”

Jurss is a junior studying history and international studies.

“It’s really great to see such an outpouring in support of the library and for keeping the books were they are,” said West Bend resident Maria Hanrahan, who has been a vocal opponent of restricting books in the young adult section. She organized the citizen group West Bend Parents for Free Speech.

“This really calls attention to the whole concept of banned books,” she said. “Censorship comes in all forms, whether its banning books, moving books or labeling books.”

During the read-in, Hope Nelson of West Bend read “Censorship and First Amendment Rights: A Primer” published by the American Booksellers Foundation for Free Expression.

“There’s a really interesting group of people in (in library),” Nelson said about the read-in. “Young and old. ... And everyone is behaving themselves. It’s been going great.”

Jurss addressed the group as did Emilio de Torre, formerly of West Bend and now living in Grafton. de Torre is youth & program director for the American Civil Liberties Union (ACLU) of Wisconsin, which is based in Milwaukee.

The ACLU is watching the library controversy in West Bend closely because of the organization’s interest in maintaining First Amendment rights of free speech.

“We have received many emails and phone calls from many citizens in West Bend who are concerned that books would be censored or unfairly labeled as pornographic,” de Torre said.

The call to recatagorize [sic] books out of the young adult section and labeling them as sexually explicit “would seem, on the surface, to be an unconstitutional act,” de Torre said.

“These books are not pornographic. They are literature and many of the authors have won awards and been honored for their works,” Jurss said.

It was obvious where Jackson resident Susan Draeger-Anderson’s opinions were. She wore a purple pin with the statement “I read banned books” and carried a hand-lettered sign that read “Don’t like it? Don’t read it! Don’t stop me!”

“First of all, I’m a librarian — unemployed right now,” she said with a laugh. “I just believe in intellectual freedom. ... I really believe it’s important to make materials available to young kids.”

Moving and labeling books is akin to marking them with a scarlet letter, she said. “How do you go about picking up a labeled book without being labeled yourself ? It’s not fair to the young people.”

“We’re here to support the library community, the librarians and the library users. First Amendment freedoms are core values of the (library) profession,” Caldwell-Stone said. “Free speech, free access to information is a foundation of our democracy.”

As the young adult librarian, Kristin Pekoll is at the heart of the book controversy.

She said Jurss’ read-in showed “support for books, and that’s all we’re doing.”

Pekoll said she was glad people in the community are talking opening about the suitability of books for teens and children. “People of West Bend feel strongly on both (sides) of the issue,” she said. 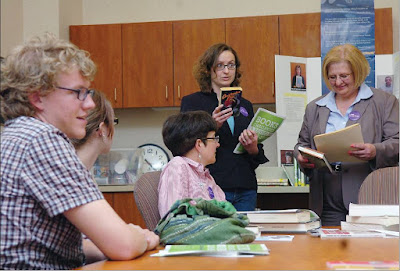 Kris Fassa/Daily News Staff Angela Maycock, assistant director to the Office for Intellectual Freedom for the American Library Association, center, reads from the back of a formerly challenged book found in the West Bend library that she remembered from middle school, while her collegue [sic], Deborah Caldwell-Stone listens after their presentation concerning freedom of speech and fighting to keep books in libraries Friday afternoon at the West Bend Community Memorial Library in West Bend.
[Reprinted under Copyright §107 Fair Use for educational purposes.]