A "safety assessment report" was prepared by Police Chief Kim Raney after Possner was removed.  Result?  Potential crimes previously unreported were revealed—in other words, the library was hiding the crimes.  Read the news report yourself:

The safety assessment report, prepared by police Chief Kim Raney after the library was placed under the Parks and Recreation Department in April, placed fault on Possner for not involving the police department in potentially criminal or dangerous issues.

The library, under the former director, was likely adhering to American Library Association [ALA] policy not to call the police: "As for obscenity and child pornography, prosecutors and police have adequate tools to enforce criminal laws.  Libraries are not a component of law enforcement efforts...."  Might this adherence to ALA policy by the library director have something to do with why the library was taken over?

Remove the ALA influence and you can protect citizens better, as the Covina Public Library case evidences.  As I have previously written, "Libraries Aid and Abet Pedophiles, Destroy Evidence, Retaliate Against Whistle Blowers, Claim Dubious Privacy and Free Speech Rights; ALA At Fault." 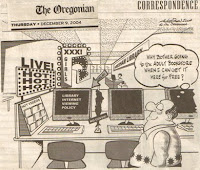 Possner, who was laid off with five other staff members just before the incidents were reported, brought two copies of library policies about users' conduct to the City Council's regular meeting to disprove the report.

"The entire 30-page safety report seems to be the product of a culture of fear, portraying a library full of danger," Possner said. "The Covina Public Library I knew was a safe place for learning and enjoyment, staffed sufficiently to maintain good service and good order."

In Covina, CA, the library takeover removed the library director who likely hid the potentially criminal activity, and suddenly such activity was exposed to the sunshine.  As seasoned students in online criminal justice courses could tell you, it was a mistake that in desperation, the former library director pathetically attempted to defend himself with the very acceptable use policies the ALA told him would protect the library.  They don't, and they didn't.

Does your own local library rely on useless acceptable use policies instead of more effective means to legally protect patrons including the use of Internet filters?  Yes, such policies are useful for certain things, but they are not useful for preventing criminal activity.  Here is something forbidden by the ALA for people to see:

The report made several recommendations to improve conditions at the library, including the installation of surveillance cameras, drafting new library policies and training for library personnel by the Police Department.

Some changes have reportedly been made already, including the installation of pornography filters on computers.

I'll venture a guess and say that the library director's plainly evident anger is a result of the publication of information that he has been hiding from the public for so long and expected would stay hidden.

The library director evidences his desperation further by making flat out false statements.  Recall that he said to the City Council, "The Covina Public Library I knew was a safe place for learning and enjoyment, staffed sufficiently to maintain good service and good order."  That is likely false.  How do I know?  Compare what he said to the City Council in September with what he said to a reporter in June:  "Former library Director Roger Possner said the lack of employees supervising visitors could have contributed to the problems.  'The only answer is supervision,' said Possner, who was laid off in March. 'Staffing is low, and it's hard to keep track.'"  So it was either "staffed sufficiently" or "the lack of employees could have contributed to the problems," depending on which Roger Possner you believe.

How refreshing it is to see a local community wresting control of the library back from the ALA and its acolytes.  Out goes the useless ALA-inspired policy and the ALA-influenced library director, in comes a properly layered means of legally protecting patrons including security cameras, improved library policies, employee training, and especially Internet filters.

Remember, all my California readers, what a Gilroy Dispatch editorial said:

Speaking of local control … even after six years, it still rankles that our librarians refused and continue to refuse to adopt a policy prohibiting access to pornography by minors on library Internet terminals.  When every day new incidents reveal the ease with which sexual predators solicit children online, any claims that the library is a safe place for kids ring hollow.  The values espoused by the American Library Association are so divorced from the values of our community that we would seriously consider withdrawing from the Joint Powers Authority and going back to the days of a city library under local control, rather than giving one thin dime to an institution controlled by an organization that believes in "all materials for all patrons regardless of age."

I hope this Covina library matter sets a national example of the benefits of jettisoning ALA policy and exposing library operations to public scrutiny.  I look forward to hearing more on this matter as more is revealed.  How about you?  Please comment below.

I am editing the above to add additional text/links, including one to the ALA's ACRL.