Net Neutrality Warning to the ALA 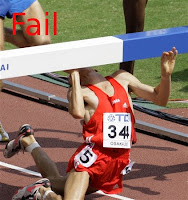 The American Library Association [ALA] is a member of the Open Internet Coalition that promotes "Net Neutrality."  Here's a warning for the ALA: "‘Net Neutrality Protectors’ Swept Away by Midterm Wave," by Capitol Confidential, BigGovernment.com, 6 November 2010:

“Candidates who support creating burdensome new Internet regulations were handily rejected at the polls,” a blog post at Broadband for America (BfA) reads.  “The message from voters is that unnecessary regulation is a losing tactic.”

To make it clear for the ALA, net neutrality lost 95-0.  Perhaps the ALA should rethink its position on that issue that has little to do with libraries anyway.  (In a related matter of efforts to clamp down on free speech, why has the ALA "historically supported" the Fairness Doctrine?)