The First Victim of the BPL was Barbara Ann Wilson—The Library Cared Less
I have written about the first library employee in Birmingham to sue, Barbara Ann Wilson: "Library Hostile Environment Lawsuits in St Cloud, MN, and Birmingham, AL, for Title VII Sexual Harassment; Wilson v. Birmingham Public Library Foundation; ALA May Be At Fault and Should Be Sued."  Read more there—see if the matter of CIPA fraud has even been addressed or if it continues unabated.  Anyone care, or is it assumed libraries are blameless?


Local Governments Can Control Libraries That Act Outside the Law
The scourge of the community will not stop until it is cut off at the head.  Local governments needing the legal basis for reining in such libraries can use as guidance the advice I provided to the Roxbury, NJ, Township Committee on 28 June 2011.  Strap yourselves in for the false information high ranking people will give you to convince you that anything goes, as I explained.

Basically, where the library acts outside the law, the government can force it to act within the law without otherwise violating its autonomy.  And where library policy allows libraries to be open public fora where anything goes, since the US Supreme Court said libraries are only quasi public fora (US v. ALA, 539 U.S. 194 (2003)), then the library is acting outside the law.

I Offer Local Governments My Assistance On Ridding ALA Influence
I will provide guidance to any community that requests my assistance.  How long do you wish to allow the ALA to endanger your communities?  This Birmingham, AL, example shows it'll never get better on its own.  See: "Will Manley Outs Library Profession as the Only One in the World That Wants Children to Have Access to Pornography; Annoyed Librarian Says Some Librarians Sound Like Smut Peddlars."

Library Thumbs Its Nose At the Community
The library is thumbing its nose at the community.  "Library patrons are looking at pornography on the Internet and management is doing nothing about it."  That sound right to you?  Get a load of this from the library management, the library told the sexually-harassed employee, "If you don't like it leave": 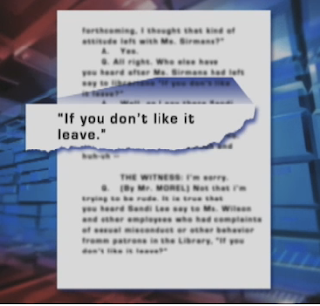 Library tells sexually-harassed employee,
"If you don't like it leave."
It is the existing library (mis)management and ALA policy that needs to leave.  It's the community's library, not the ALA's library.

Advice for Adam Morel, Esq.:  Sue Birmingham
I have advice for the attorney for the two women, Adam Morel, Esq.  Sue the City of Birmingham.  It had fair notice of the condition the first time around.  Nothing was done.  It had fair notice that the library might even be defrauding the federal government under CIPA.  Again, nothing was done.  Treble damages might even be appropriate under the right circumstances.
Follow @SafeLibraries
Posted by SafeLibraries® at 1:27 AM