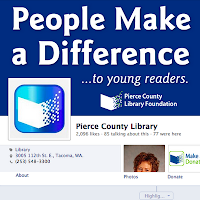 The Pierce County Library, Tacoma, WA, is blatantly defrauding the federal government of funds meant for libraries compliant with the Children's Internet Protection Act (CIPA).  It has essentially stolen $462,789.73 from the federal government.  I predict it will continue to steal until forced to stop as the fraud has been continuous for eight years so far.

It is committing this fraud in policy and practice.  The policy goes directly counter to the law, and the practice is evident from open pornography viewing.

The law, CIPA, was found constitutional in 2003.  US v. American Library Association, 539 U.S. 194 (2003) held, "public libraries' use of Internet filtering software does not violate their patrons' First Amendment rights...."  Simple, right?  Now look at Pierce County Library's "Internet Use Policy" that says essentially the exact opposite:


But the Pierce County Library System Board of Trustees considers that all materials selected or accessed by adults are protected under the First Amendment to the U.S. Constitution until such time as they are determined unprotected by judicial action.  Consequently, except as set forth in this Policy, the Library System does not monitor, filter or endorse materials on the Internet.


Oh yes, the library later claims in its policy to be CIPA compliant:  "Consequently, the Pierce County Library System's computers that have access to the Internet will be filtered to the extent required by CIPA, but that persons 17 years of age or older will have the right to remove that filter for their use."  But CIPA requires the library or a librarian to remove the filter, not the patrons themselves.  So in yet another way, and again in writing, the library is evidencing that it is failing to be CIPA compliant.

As to the amount of CIPA fraud, that's $462,789.73.  Anyone can see this for themselves by searching open public records of CIPA funding for "Internet Access" (as opposed to "Telcomm") and aggregating the amounts obtained from 2004 to the present (2012).  Since CIPA was found constitutional by the US Supreme Court in 2003 and for related reasons, 2004 is the relevant date to begin finding fraud.  Search for Pierce County Library in the state of Washington here: http://www.usac.org/sl/tools/commitments-search/

I will be reporting this fraud here:  "Submit a Whistleblower Alert."  Among other things, I will be submitting the URL to this blog post as it contains or links to relevant evidence:
To commit this fraud people had to sign a certification to the federal government that the library was entitled to the funds, and they had to have done so knowing the library does not filter but the law requires it to do so.  Those people have committed fraud, perhaps dereliction of duty, perhaps a violation fo the public trust, and should be fired immediately.  If I were part of the local media, I would file FOIA requests with the library and with the Federal Communications Commission responsible for CIPA to find out the names.  Just because a public library or librarian is involved does not mitigate the offense.

The local government is hereby put on notice of this fraud and the potential for resultant harm.  If the pornography viewing intended to be stopped by CIPA results in any crimes or misdemeanors against librarians or patrons, the government can and should be sued for failure to stop the library, a governmental entity, from acting outside the law.

Mind you, this is in the state where Dean Marney successfully won state and federal Internal filtering cases recently by pointing out the false "dogma" of the American Library Association, yet the Pierce County Library is aware of this but continues to mislead the public.

So the evidence for fraud comes from at least three sources:
The question is, will the library continue to commit this fraud?  Will the government require the library to comply with the law to minimize its own liability, let alone apply old fashioned honesty?  Will the media report accurately about this fraud?


Although the Library has adopted these policies, it disclaims any warranties on the effectiveness of any filter and disclaims any liabilities if the filter is inadvertently not implemented upon request.  The Library further assumes no responsibility for damages, direct or indirect, arising from any use of the Library's connections to the Internet.

Any library crime victims and perpetrators, feel free to contact me for assistance in taking legal action against the library, the people who acted fraudulently, and the government that allowed the library to act outside the law, especially now that the library is on notice of this fraud.

The library has been in contact with me and is being very forthcoming in offering to provide the CIPA certifications.  Hopefully more good news to come.

I have today reported this library to the Whistleblower Alert line, 888-203-8100, option 9, during working hours.  (During non-working hours option 9 was not available, and the online means had a technical failure last I tried.)  The evidence I provided is fully contained in the above post and added note.  I confirmed the receptionist was able to see this post.

Past experience tells me I will never again hear from the FCC about this matter, nor will I ever learn what action, if any, has been taken, even if I were to ask.  I have reported about four libraries in the past, some cases of which are reported on this blog.  From what I can tell, the fraud in those libraries continues unabated.

Be that as it may, I see that the investigation, at least of my own post on this matter, has already begun.  I am getting multiple visits to my blog from Irvington, NJ, including a search for "safe libraries blogspot," which I discussed with the receptionist, and links being followed, including to the original one containing the video by @kevinNYCdipped.  So I am satisfied at least someone is looking at the evidence.