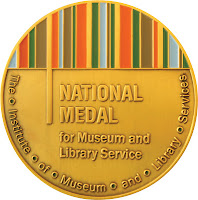 
Both libraries committed fraud (in my opinion, by defrauding the E-Rate program under the Children's Internet Protection Act):


They may have enriched themselves with stolen funding to afford what it took to get the awards.  I have no idea how a library that commits fraud would be selected for such an award.  But I predicted something like this might happen:

What a disappointment.  A library committing CIPA fraud is awarded by another governmental entity.


URL of this page: