An incident on Friday, Sept. 16, involving a non-student viewing inappropriate materials on a library computer has brought up questions regarding campus policies toward computer access and the campus being open to the public.

The incident was reported around 2 p.m. on Sept. 16 and the man was asked to leave the library.

The Pierce College Library / Learning Crossroads and its equipment are open to the public.

“It’s a challenge at times, but it’s an open campus and the public loves coming here to use it,” Guerrero said. “There’s a little more control in there [the library]. This is a very safe school when you look at the crime stats.”

Incidents regarding non-students are minimal, according to Guerrero. However, according to librarian Clay Gediman, this is not the first time a non-student has been asked to leave the library.

“We have had a problem with a couple homeless people who do come in, and they’re normally quiet,” Gediman said. “But if their smell gets too strong it could be an issue and we have to remind them that people have to work around here.”

The idea of anyone being able to come in and use equipment may be jarring for some students.

According to Gediman, Pierce College hasn’t had a problem with the public visiting the campus and utilizing its resources.

“At the same time, we are the only campus in the district that doesn’t have locked down computers where all the other ones require you to log in to use them,” Gediman said. “Even if we had the public coming in, we would have a guest account that they could use. We could actually track it if we wanted to, but we don’t have that process set up yet.”

According to Gediman, there have been discussions about setting up some sort of process for a little while now. However, it is an IT issue and he does not know what their time schedule is for instituting security features.

There is currently a login system for students that is used online for registration and Canvas as well as to use the printers inside the library. Implementing this same system in the library would not require students to remember any additional information, or require the creation of completely new login IDs.

“It would be a hassle to login, but it makes sense,”  said second-year Pierce College student Ben Sarkissian.


Reprinting here at SafeLibraries given US Copyright Fair Use provisions, particularly as the original link produced a "site suspended" error as shown (and I retrieved the text and graphic from Google cache): 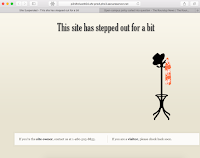 Seems to me the librarian saying, "Pierce College hasn’t had a problem with the public visiting the campus and utilizing its resources" is misleading people, but he does go on to describe a number of problems.

URL of this page:
safelibraries.blogspot.com/2016/10/open-campus-policy-called-into-question.html