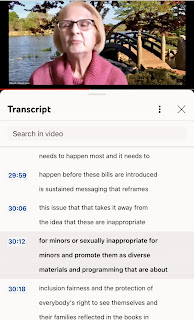 I have filed an attorney ethics complaint against American Library Association's in-house lawyer, Deborah Caldwell-Stone, Esq., who directs ALA's Office for Intellectual Freedom and its Freedom to Read Foundation.  Res ipsa loquitur:
This lawyer, as Director of the American Library Association's Office for Intellectual Freedom, provided training to librarians on 20 May 2020 as can be viewed at "Webinar: Banned Books Uncensored: LGBTQIA+ Stories & Gender Identity," by ALA Office for Intellectual Freedom, YouTube, 21 May 2020. It has been viewed almost 1000 times. It can be seen at https://youtu.be/J-hyIwgXA8k
During that training the lawyer made statements in violation of Rule 8.4 Misconduct, wherein she (c) engage[d] in conduct involving dishonesty, fraud, deceit, or misrepresentation. Specifically, she trained librarians that "before ... bills are introduced," there needs to be "sustained messaging" that "reframes" books that are "sexually inappropriate for minors" and "promotes them as diverse materials ... that are about inclusion."
Indeed the Right to Read Act has been introduced in the US Congress that says, "The term 'right to read' means all students have access to ... (D) culturally diverse and inclusive materials...." See https://www.congress.gov/bill/117th-congress/house-bill/9056/text?q=%7B%22search%22%3A%5B%22%22%5D%7D&r=1&s=1 This shows her advice before bills are written to reframe sexually inappropriate books for school children then promote them as diverse and inclusive has been taken seriously and placed into effect. If the bill passes, it will be illegal for parents to challenge sexually inappropriate books in public schools nationwide because they will have been reframed as diverse and inclusive. 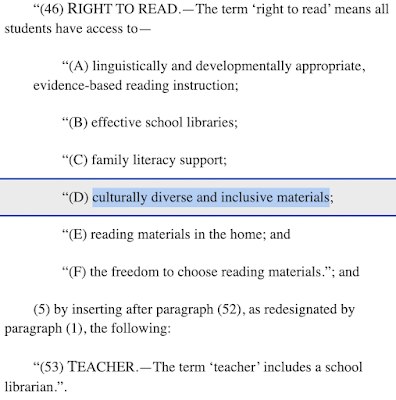 To see her speaking just the offending words without viewing the entire video, go here: https://www.youtube.com/clip/UgkxkMJFBkH5IFLMAaQaDR1iups-9FDZ5tNj
Telling librarians to reframe and promote "sexually inappropriate" materials "for minors" and pass them off as "diverse materials ... that are about inclusion" has to be conduct involving dishonesty, fraud, deceit, or misrepresentation or those words have no meaning. She is being openly dishonest, fraudulent, deceitful, and she is misrepresenting sexually inappropriate material for school students as beneficial, and she says it openly as Director of the Office for Intellectual Freedom during a training session for librarians. Training librarians how to sexualize school children with known sexually inappropriate material then posting such training on YouTube for almost 1000 more to see has to be an open violation of Rule 8.4(c) Misconduct and an embarrassment to the legal profession.
Transcript of Deborah Caldwell-Stone, Esq. as discussed above:
But ultimately, we found that the thing that needs to happen most, and it needs to happen before these bills are introduced, is sustained uh messaging that reframes this issue um that uh that takes it away from the idea that these are inappropriate for minors, or sexually inappropriate for minors, and promotes them as diverse materials and programming that are about inclusion, fairness, and protection of everybody's right to see themselves, and their families reflected in the books in the public library.
—
URL of this page:
safelibraries.blogspot.com/2022/10/right-to-read-act-ethics-complaint.html

Later she’ll speak with me re @TheDemocrats + @ALALibrary The Right to Read Act wherein I will report shocking news that will kill the Act: https://t.co/pcFrC25ACJ https://t.co/Vv9UelLYsC

NOTE: I have made copies of the relevant portions of the offending video should American Library Association decide to delete it, a deceptive practice of censorship that it practices regularly when attention is brought to its actions.  Should the video be made to disappear, please advise so I can post archives.
NOTE ADDED 3 NOVEMBER 2022:
I have received the below email showing the Attorney Registration and Disciplinary Commission (ARDC) of the Supreme Court of Illinois has received the above and the attorney must reply to them, and I might get a copy of how she defends "reframing" graphic child p r n as something it isn't so it can be forced on children and thinking that doesn't besmirch the legal profession under the Rules of Professional Ethics.
Re:  Deborah A. Caldwell-Stone in relation to Dan Kleinman
NO. 2022IN03640 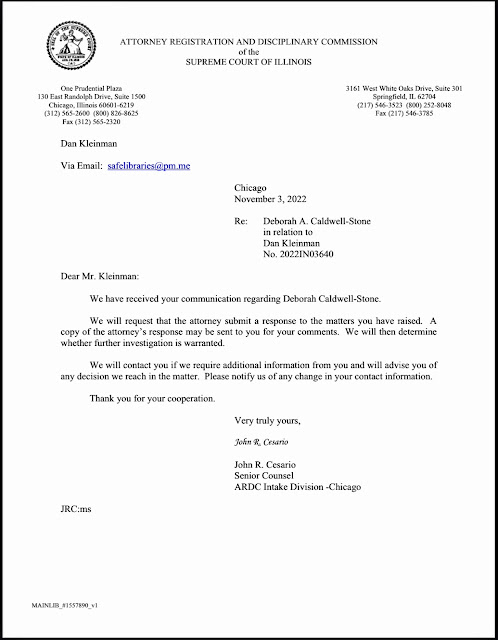 NOTE ADDED 18 NOVEMBER 2022:
Today I received an email from Attorney Registration & Disciplinary Commission containing Deborah Caldwell-Stone, Esq.'s, response.  I now have 14 day to provide my response.  Until then, here is my tweet containing her response:

NOTE ADDED 29 NOVEMBER 2022:
Today I have responded to the Attorney Registration & Disciplinary Commission as follows: