Will ALA Silence Lead to Death? 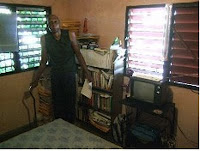 A man on a hunger strike is dying.   The American Library Association [ALA] is in a position to help the man.  It is being asked to help.  Will it?

Here are the facts:


Here is one example of how the ALA has addressed the issue of Cuban librarians in the past:


For more of the disgrace that is the ALA's treatment of Cuban librarians, see my other blog posts at http://safelibraries.blogspot.com/search/label/CubanLibrarians.  I hope the ALA will act effectively now, but I doubt it.

Hurry, ALA, Guillermo Fariñas Hernández of the Dr. Roberto Avalos independent library in Santa Clara is dying.   Please help.   I have included above a picture of the man so you can look him in the face and see who your late de facto leader wished would have "drowned."  That leader is gone.  It's time to move on now and help Cuban librarians like you help other librarians worldwide, and perhaps more, given the mortal circumstances.

We write to you in your capacity as president of the American Library Association, asking for your urgent and compassionate aid in saving the life of a fellow library worker, Guillermo Fariñas.

Mr. Fariñas, the director of the Dr. Robert Avalos Library and the national coordinator of the largest group of independent libraries in Cuba, is on a hunger strike at his home in Santa Clara to win the release of 26 Cuban prisoners who are in poor health.

Mr. Fariñas has refused to consume food or fluids since he began his hunger strike on Feb. 24, following the hunger strike death of prisoner Orlando Zapata Tamayo.  Guillermo Fariñas is growing weaker, and Cuba's official newspaper "Granma" has indicated that the government will make no effort to save his life after his health declines to the point of unconsciousness.

Among the prisoners for whose health Guillermo Fariñas has gone on a hunger strike is Ricardo González, the director of the Jorge Mañach Library, and Ariel Sigler Amaya, who was condemned to a long prison term for, among other alleged crimes, gathering books for a library collection.  Both have been named prisoners of conscience by Amnesty International.

On an urgent basis, we ask you to please contact the Cuban Minister of Foreign Relations, Mr. Bruno Rodríguez Parrilla, to request that efforts be made to save the life of Guillermo Fariñas.  The e-mail address of the Foreign Ministry is: (cubaminrex@minrex.gov.cu).

Today the Parliament of the European Union passed a resolution expressing concern for Mr. Fariñas, and we hope the American Library Association will rapidly join the worldwide effort to help in saving his life.