Vote Sara Kelly Johns for American Library Association [ALA] President. Why? Finally the ALA has a chance for a president interested in true intellectual freedom, instead of just making it appear that way. 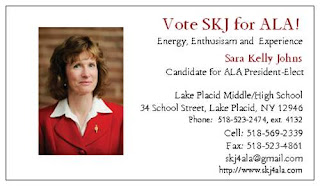 If the ALA is lucky, President Sara Kelly Johns will make full use of the ALA's "Office for Intellectual Freedom," [OIF] which it is not, thanks to the ALA's former de facto four-decade leader, Judith Krug, who wanted the issue of jailed Cuban librarians to "drown" (the issue, that is, not the librarians) and considered the court-ordered destruction of six entire library collections, including the burning of a Martin Luther King, Jr. biography, to be a matter not worth mentioning on the OIF's web page entitled, "Book Burning in the 21st Century."  And the ALA is still ignoring Afro-Cuban civil rights.

I am hoping Sara Kelly Johns will reverse these disgraceful injustices, and many more.  She might unleash ALA's principles of intellectual freedom on behalf of those trying to exercise that human right in Cuba and elsewhere.

Check out Sara Kelly Johns—see how obvious it is that people love her:

Here is the information I have on which I base my decision to endorse Sara Kelly Johns: 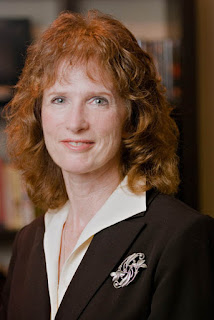 Sara Kelly Johns and Molly Raphael, candidates for ALA president, spoke on March 8 at the office of New York City's METRO library organization.

Critics of current ALA policy say that past ALA investigations and panel discussions on Cuba have overlooked or ignored the repression of Cuba's independent library movement, founded in 1998 to oppose censorship. According to journalists and human rights organizations, Cuba's independent library workers have been subjected to police raids, arrests, 20-year prison terms and the court-ordered burning of confiscated book collections. Amnesty International has named Cuba's jailed independent librarians as prisoners of conscience and is calling for their release.

In the only opinion poll of ALA members on the Cuba issue, conducted by AL Direct, 76% of respondents voted for the ALA to condemn the repression Cuba's independent library movement.

During the question period at the March 8 presidential candidates event in New York, a member of the Friends of Cuban Libraries complained that several ALA investigations and panel discussions of this issue had allowed only one side of the controversy to be fairly heard. The questioner asked Sara Kelly Johns and Molly Raphael to guarantee that, under their leadership, diverse views on the Cuban library controversy would be fairly represented in future ALA considerations of this issue.

Sara Kelly Johns responded to the question by noting that she has paid close attention to the Cuban library issue. She gave assurances that, under her leadership, diverse views on controversies would be heard within the ALA and that the Cuban library issue would not be permitted to "go under the table."
If brought to Council by a Council committee, the issue would be discussed.

In contrast, Molly Raphael said that the ALA has already established its Cuba policy on several occasions, and she stated it is not the role of the ALA president to challenge settled policies. With regard to the ongoing controversy over Cuba's independent libraries, she stated it is not a "yes or no question."

In contrast, the Friends of Cuban Libraries believe book burning is very much a "yes or no question."