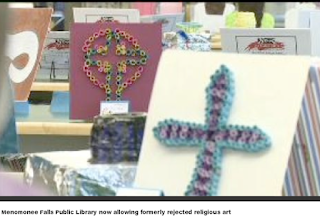 In 2010, Teacher Leslie Granberg says 15-20 pieces of her student art never made it on display.  She says the apologetic library staff telling her, "You can not have crosses we have called the other school and told them to take down their work."

Granberg says she was never given an official reason, but when asked if the township was concerned about blurring the lines of church and state. She replied, "Yes they probably don't want us pushing religion."

"Apologetic"?  "Pushing religion"?  Looks to me like someone setting the agenda is forcing the librarians to comply and the entire community is supposed to follow along.

Any guesses who might favor censorship of the Christian religion in public libraries while arguing it is censorship to keep inappropriate material from children?  Please comment below, and be sure to hear Mark Belling talk about it at the links provided in WISSUP = WISCONSIN SPEAKS UP: Menomonee Falls Library CENSORING Children's Artwork.