Library Board Prez Ousted in West Bend, WI, After Book Controversy; A Lesson for Library Board Members Nationwide 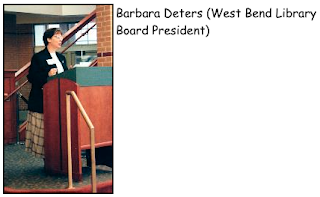 A library board president is removed by the West Bend, WI, government for a lack of professionalism in her handling of the issue of inappropriate books for children!  Her personal attacks on various people figured into the equation as well.

And this is not the first time the West Bend government has ousted library board members who protected American Library Association [ALA] policy instead of local interests/children.  See also, "Library Board Reappointment Rejected," by Dave Rank, West Bend Daily News, 21 April 2010, p.A7.

Here are the details on the removal of Barbara Deters, from an interested observer and one victim of her attacks, including YouTube videos to see for yourselves:

Naturally, Barbara Deters's personal attacks on others are excused as efforts to oppose "censorship" by "ultra-conservatives" who were "voted into power this month in a low turn out election."  See, "Let the Purges Begin. WB City Council Dumps Library Board Member Who Stood Up Against Censorship," by Mark Peterson, The Motley Cow, 21 April 2010.

See also, "West Bend Library Board President Not Reappointed," by Owen, Boots & Sabers, 20 April 2010: "Regardless of what you thought of the controversy itself, Deters behaved unprofessionally and publicly attacked the council and individual members - even though she is appointed by the council and is supposed to be an instrument of the city.  It was time for her to go."  The many comments on this Boots & Sabers blog post are even more revealing.

"Alderman Michael Schlotfeldt moved to not reappoint Deters, stating she verbally attacked aldermen during the book controversy...."  Should the issue be reconsidered now that the politics of personal destruction have been removed from the equation?

"Of the nine Library Board appointees who last year dealt with a campaign to remove or label certain books in the young adult section of the West Bend Community Memorial Library only one remains, John Aynesworth."  Recall that these library board members choose to follow the advice of outsiders, with the ALA, for example, making personal visits in West Bend.  What is the lesson to be learned by library board members nationwide?  Please comment below.