Kansas City Library Riddled with Crime: No Internet Filters is Why, and Acceptable Use Policies Do Not Work 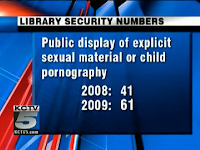 The Kansas City Public Library is riddled with crime.  Just look at this graphic to the right of "Library Security Numbers" showing 102 incidents in the past two years of "Public display of explicit sexual material or child pornography."

Libraries have always been considered a safe place for families, but statistics just released might change all that.

Officials with the Kansas City Public Library are concerned because they have seen certain security violations double over the past year.
....
A look at the numbers shows offensive language and the use of controlled substances, including alcohol, doubled between 2008 and 2009.  Public displays of sexual material, including child pornography, went up from 41 to 61.  A total of 20 different violations went from 466 in 2008 to 740 in 2009.

Lucky
Kansas City Public Library CEO Crosby Kemper III admits, "We've been lucky that we haven't had a really major incident."  See "Crosby Kemper III: Library 'Lucky' Not To Be Even Less Safe Than It Feels," by Scott Wilson, The Pitch, 19 May 2010.  And when the really major incident does occur, that statement could be used as evidence the library knew or should have known there was a problem, and treble damages might be awarded.

Media Missed the Reason for the Crime Statistics
The media outlets completely missed the reason for the high crime statistics.  Can anyone hazard a guess what this might be, other than the "homeless" the library blamed for the crime wave?  Hint: the American Library Association [ALA] opposes the use of these in public libraries despite losing in US v. ALA, and it strongly leans on libraries not to use these.  That's right, "The Library does not monitor or control information accessible through the Internet...."

Acceptable Use Policies Do Not Work
Notice also how acceptable use policies fail to have any effect: "Customers may not use Library computers to commit any illegal acts.  Such acts may include, but are not limited to ... public display of material from sites that may be deemed unlawful under federal or state statutes."  Yet in the past two years there have been 102 incidents of "public display of explicit sexual material or child pornography."  Obviously no one is deterred by an acceptable use policy.  The ALA recommends using acceptable use policies instead of Internet filters.  So it recommends a solution that does not work.

Who Controls the Library—the Citizens or the ALA?
Will the citizens of Kansas City, MO, do anything about this, or will they continue to allow the library to follow ALA directives until that "really major incident" finally occurs?  Whose kid will it be?  Please comment below.