Personally, I like happy boat trips, but this being the SafeLibraries blog, the following regarding the Pickens County Library System in South Carolina may be of interest:


Call me jaded but I’m really not shocked by this.  I’d be more shocked if you could find a men’s room in a library where there weren’t guys rubbing one out.

Libraries aren’t safe places for children to be alone, and sex in the bathroom is just the tip of the iceberg as to why.  The blog Safe Libraries should be required reading for every parent.

If you're planning on using the mens room at the Easley, South Carolina public library you may want to take some hand sanitizer with you as it seems to be a popular attraction for the craigslist cruisers.

Police there arrested one 46-year-old James Michael Stewart after he allegedly posted an ad seeking anonymous sex in the library's rest room. 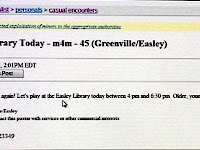 EASLEY, S.C. -- Easley police arrested a man Wednesday who they said was using Craigslist to request sex acts at the local library.

Easley Police Chief Danny Traber said that a library patron saw the ad on Craigslist and called the library director Allison Anderson to report it.

Police said the patron then said, “By the way, I responded to the ad and the guy is already there.” On this Memorial Day 2010 weekend, I thought it appropriate to honor the memory of Captain Kimberly Hampton.  And thank you, Easley, SC, for naming a public library after a real heroine.  Everyone please visit U.S. Department of Defense Community Relations on how to help troops and their families.

To my many readers visiting this blog post from all over the world and making it one of my more popular pages by searching for "gay cruising" or by directly linking from other sites, I have a special treat for you.  Gay cruising in public school libraries!!!  Hey, if the school's library director has no comment, and the student Attorney General says who cares, why not, right?  Here's a map to the UNC Davis Library.  Have fun: