The Crestview Public Library, Crestview, FL, is not responsible for the consequences of a child stealing an adult book from the library.  He "lost his mind" after reading the material and is now in a "home for extensive therapy."  See "Crestview Mom Targets Manga; Calls It 'Shocking,'" by Brian Hughes, Crestview News Bulletin, 2 July 2010.

I am very sorry that inappropriate material for children may have negatively affected the boy.  However, the library kept the book "in the general stacks, on a top shelf in a section with other graphic novels and comic books not geared toward young readers," as opposed to "the young adult section of the library [that] is oriented toward young teen readers and does not contain the adult themes of the book [the boy] took."  The mother admitted, "her son had removed the book unsupervised from the library's general stacks last summer and put it in his backpack." 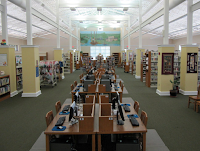 I called the library director, Jean Lewis, and the governmental official, Council President Charles Baugh Jr., to offer my assistance, for what it's worth.  I am usually critical of libraries in situations where children are being harmed as a result of American Library Association policy, but this is not one of those cases.

Rather, this is an example of a citizen making false accusations about a library, at least as reported in the media.  The mother "had circulated a petition bearing 226 signatures of citizens protesting the availability of manga, ... which is ... Japanese animation.  However library said some patrons complained they were misled when they signed the petition.  'They told us [the mother] ... asked them to sign a petition protesting pornography in the library....'"  Let's be clear.  SafeLibraries supports actual instances of library policy or practices harming children, not manufactured claims of library malfeasance.

Okay, all my readers who expect me to oppose the library every time, why don't you comment on what I just said?