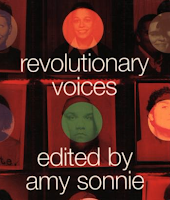 Folks, I just saw a delightful presentation consisting of young people reading from a book about gay teens and their concerns.  The actors/readers were really outstanding, almost professional, and were led by Brandon Monokian and Victoria Fear.  They were acting, not just reading.  I saw this show because of my involvement in a certain library issue in New Jersey (see 1, 2, 3, 4), and I am glad I did.  I recommend this show to everyone, except children too young for strong language. The next and last scheduled showing is in Riverton, NJ, this Sunday.  Go see it.

The show is called Revolutionary Readings.  The readings are from an out-of-print anthology called Revolutionary Voices: A Multicultural Queer Youth Anthology, edited by Amy Sonnie.  The readings were exceptionally well done and enjoyable.  I am certain that any parents of the readers who saw their children performing would have been filled with pride.  Amy Sonnie should see this.

Afterwords they will suggest a donation to the Ali Forney Center that provides housing for homeless LGBT youth in New York City.  As people left, the actors all hugged each other and their families, some quite emotionally.  It was cute.  Am I allowed to say that?

Note that the "Revolutionary Readings" show did not illustrate the graphics nor read the written material that likely violated the library policies.  Yes, you'll hear a curse word here and there, but there was no mention of ..., well, I'll let you research why the libraries removed the book.

So go see it then give some charity.

That said, I must point out that media reports of what happened in two Burlington County libraries when the book was properly removed have been largely inaccurate.  The students who created the show did so based on those inaccurate reports.  They believed censorship or book banning had occurred, thanks to the media.  So they have decided to speak up against censorship and I applaud them for doing so, but in reality, no censorship occurred in Burlington County.

The first reporter to get the story straight was Jim Walsh of the Courier Post.  Notice the title still incorrectly references a "banned" book, but reporters often do not select the title, and Jim Walsh himself did not make the claim.  So please read, "Banned Book To Be Read at Show," by Jim Walsh, Courier Post, 20 August 2010.  See the details about the public library issue that no previous reporter has elucidated.

The article includes the following:

"Libraries may remove books for legitimate reasons," he said.

And I was accurately quoted.  No "banning" or "censorship" occurred.  You see, the book was removed from the school in compliance with Board of Education v. Pico.  Even the American Library Association's Judith Krug said, "On rare occasion, we have situations where a piece of material is not what it appears to be on the surface and the material is totally inappropriate for a school library.  In that case, yes, it is appropriate to remove materials.  If it doesn't fit your material selection policy, get it out of there."  It was removed from the public library in compliance with the library's book selection policy.

The book was found to contain graphics and written material that violated the policies of both institutions.  As a result, it was removed.  And if any other school or public library wishes to review then remove the book for policy compliance, it may do so legally without fear of "banning" or "censorship."

Speaking of fear, Victoria Fear was stellar and has a captivating smile and friendly disposition.  Before the readings began, she made a public statement.  Recalling that the statement was made based on the misleading information in the media, the speech contained substantially false information for which Miss Fear is blameless.  Let me tell you what she said so when you go to the show, you will not be surprised:

Hi guys!  Thanks for coming.  Um, alright, so we're here today because, um, a woman named Beverly Marinelli and her supporters walked into the Rancocas Valley Regional High School Board of Education meeting in February and they said that three books were unfit for the library and should be removed.  They felt this way because these three books were on the G L S E N, Gay, Lesbian and Straight Education ... Network....  Had a brain fart, they're reading [audience laughter].  The G L S E N was founded by Kevin Jennings who is on Obama's Administration, and this group of people feel that any book related to Kevin Jennings should be eliminated from school, they don't feel they're safe for children.  So the school board met and they decided they will only remove one book, that being Revolutionary Voices,

Um, Miss Marinelli then contacted Gail Sweet who was the library director for the Burlington County Library System and made the same attempt to get these books removed and Miss Sweet, though she is the library director, did not follow the proper procedure that she had put in place herself and decided just to silently take the books off the shelves and not make it a public issue.  So she kinda tried to sweep the issue under the rug and just make the books disappear without anyone noticing, but we noticed.

Um, the LGBTQ community needs to be heard, especially teenagers.  All the authors in this book are 14 to 26 years of age and, I mean, everyone here were teenagers once or maybe you still are, and it's hard when you're a teenager, you wanna find your voice, you wanna find our place, you wanna figure out who you are, and this was a great resource for kids and now it's eliminated from these two locations.

So we find that that's seriously unfortunate and we would like to inspire an overturn in the ruling, which is why we're here.

Um, so this is the fourth performance of Revolutionary Readings.  Brandon came to me with the idea and we helped put together the actors and books the dates and we just want these authors to be heard because they have a voice that deserves to be heard by everyone, especially those who really need to hear it, other teenagers.

So this is an excerpt from the text....

Please, do go see the show.  Go support the children.  I doubt the removal decisions will be reversed as Miss Fear hopes, but if you do have an issue, the ACLU will likely be your target, not these children: