SafeLibraries Changing Library Profession According to Speaker at ALA 2010 Annual Conference; SafeLibraries Welcomes Media Requests for ALA Balance

SafeLibraries is changing the library profession, according to a featured speaker at the American Library Association's [ALA] 2010 Annual Conference in Washington, DC.  Here is my transcript from the relevant section of the Intellectual Freedom Issues Briefing Session on 27 June 2010:

I think this is especially important now when our, when our profession is subject to change by outside organizations and individuals; this Safe, uh, Libraries blogger ironically is from New Jersey as well, had a voice in the Wisconsin library association, um, challenge and in our challenge, and they seek to educate people and politicians about who controls public libraries and that citizens should, not the ALA.  And if they are concerned with public libraries you know that they are going to be very concerned with school libraries.

Source:  "Video from Annual Conference:  IF Issues Briefing," by Angela Maycock, OIF Blog, 13 August 2010, speech by Dee Venuto at times 1:04:54 to 1:05:26, emphasis added.   (See her speech handout having the graphic about SafeLibraries shown below.)  Remember, this being the ALA's Office for Intellectual Freedom [OIF] blog, no comments are allowed. 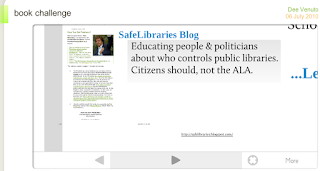 I know a New York paper called me a "library watchdog" and the international news source Agence France-Presse said SafeLibraries.org was "a clearing house for information about challenging books," but this ALA speaker saying the library profession is changing as a result of my efforts is really very exciting for me.   It is not the first ALA annual meeting where SafeLibraries has been discussed, and it is not the first time the ALA has discussed SafeLibraries in public, but it is definitely major evidence that SafeLibraries has been effective in, as the speaker said, "educat[ing] people and politicians about who controls public libraries and that citizens should, not the ALA."

I hereby welcome all media inquires on any issue involving libraries where the ALA is also contacted for its view.  I'll provide the balance.  The ALA sees me as a game changer, the media might as well too.  Be aware that I was scheduled to appear on Fox News to balance an ALA representative speaking on so-called Banned Books Week, but the ALA pulled out at the last minute after learning I was to provide balance; the interview was canceled.  Keep that in mind for when the ALA downplays my effectiveness or puts words in my mouth.  Call me to find out for yourselves what I would say.