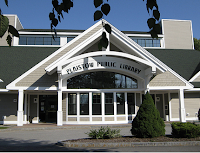 It says a Board of Trustees meeting will occur Monday night to discuss the incident.  This email is intended to provide you, the Board, the patrons, and the Plaistow government, with information some may find enlightening.  I will publish this for others to see as well.  My knowledge of the specific facts pertaining to the immediate incident draw mainly from the Union Leader article, so I'll quote from that, then comment.

"Workers at the Plaistow Public Library got a surprise last week when a printer began spitting out pages of pornography."  Please note that librarians and library employees may consider this to be sexual harassment and may file EEOC complaints or civil suits:

"Police were notified of the incident, but Deputy Police Chief Kathleen Jones said no crime was committed because the images involved adult pornography, which isn't illegal."  Yes, that is true, but that does not mean a public library has to allow such activity even if legal.   More on that soon.

"Librarians say they’re not in the business of monitoring what people do on library computers, and most don’t have filters to censor Web sites."  Yes, librarians need not necessarily monitor what people do.  "Close monitoring of computer users would be far more intrusive than the use of filtering software, and would risk transforming the role of a librarian from a professional to whom patrons turn for assistance into a compliance officer whom many patrons might wish to avoid."  Rather, there are perfectly legal and effective means to block certain material from library computers, as the quote intimates, and it not "censorship."

When the media write about "filters to censor Web sites," they have stopped reporting on facts and entered the world of opinion.  In other words, the story provides a spin that has more to do with the viewpoint of the writer than the law and the reality of the situation.  In reality, with properly configured Internet filters, no "censorship" occurs.  Besides, even if a web site is inappropriately blocked, the law (discussed below) specifies a patron can simply ask for the site to be unblocked.  By the way, besides the text, the title of the Union Leader article presents an inaccurate picture.  An accurate and more interesting title would have been, "Porn in Library Startles Librarians."

Further, a site blocked here or there does not compare with the sites the library itself blocks and no one even notices.  There is something called the "Deep Web."  It consists of seven eighths of the entire Internet.  Google does not reach into the Deep Web.  However, there are specialized means of reaching into the Deep Web.  Libraries often make absolutely no effort to employ those specialized means.  So libraries themselves may be blocking eight times as much information as could ever be blocked by filters.  I am not impressed that a filter blocks one or two sites while libraries block millions by not helping patrons navigate the Deep Web.  Besides, a patron can ask for an unblock anyway.

"Like most libraries, the Plaistow library has a policy spelling out the rules for Internet use."  Be honest.  No perpetrator ever follows those policies/rules.  I know of case after case of "surprised" library directors who proclaim the "acceptable use policy" should have stopped the inappropriate activity.  Examples:

Internet filters work to filter out inappropriate material—acceptable use policies do not.  Such policies are effective, however, in making people feel good that something is being done.  (The same goes for "privacy screens.")  I think having an effective means to manage a public library is better than having policies that make it appear an effective means is in place.  Indeed, many libraries claim they do not use filters because they do not want parents to be lulled into a sense of security—exactly what they are doing themselves with acceptable use policies.  It is a double standard.  As long as the Plaistow Public Library continues to place its trust in a piece of paper, incidents like the one that occurred will continue to occur, and eventually some child, patron, or library worker will be seriously harmed.  If your town is worried about liability, think about the consequences if something like that should happen, especially now with the library and town government being put on notice of the uselessness of paper policies and the double standard used to defend them.

"'We felt that by printing and then leaving them in the library without picking them up, it was almost a challenge for the staff.  Someone had to take those copies out of the printer.  We were definitely surprised at how many pages were printed,' she said."  "Almost"?  Continue to downplay such incidents and eventually legal action may be taken, as illustrated above.

And they guy didn't pay for those copies.  Isn't that theft?  After all, libraries will send the police after five year olds for overdue books:

"Gavrish said she’s been director for about a year and in that time has had to speak to only a few people who were accessing what were believed to be inappropriate sites."  So that establishes that there are numerous incidents.  At this point it should be obvious that the "acceptable use policy" is not only a failure, but is already known by the library to be a failure.  So to the extent the library continues to promote its policy as effective, it is knowingly misleading the public, and possibly intentionally.

You see, public libraries are not open public fora where anything goes.  They are "quasi" public fora where, among other things, pornography may be legally blocked using Internet filters.  It has been nine years since this was decided by the US Supreme Court in US v. American Library Association (http://laws.findlaw.com/us/539/194.html).  Nine years.  No library director can possibly be unaware of this.  It makes me think your actions as library director to mislead the public are not only knowing, but also intentional.  To be clear, US v. ALA said, "[P]ublic libraries' use of Internet filtering software does not violate their patrons' First Amendment rights...."

Even major media is catching on to the misinformation and calling for the placement of filters in public libraries:

Here is library director Dean Marney, for example, who speaks out about the "dogma" the American Library Association [ALA] and its acolytes use to mislead people, so library directors are definitely aware of US v. ALA:

Your own patrons are finding out about this now too, thanks to me:

"While no crime was committed, Plaistow police said they would still like to know who printed the images so they can run the name through the sex offender registry because some offenders aren’t allowed to be viewing pornography."  Valid point (except perhaps for theft of services for the unpaid copies).  However, many libraries intentionally destroy such information or fail to collect it in the first place, or make its retrieval difficult, having been guided to do so by the ALA:

"The New Hampshire State Library also has an Internet acceptable use policy that says it doesn't censor legal activities."  Again, such policies do not work.  Again, it is not censorship to comply with US v. ALA and filter out pornography from public libraries.  The NHSL saying it is only goes to show New Hampshire has a bigger problem than just Plaistow.

I hope these comments of mine and the associated references help you and others be aware of the basis for legally filtering out pornography from your public library.  I hope you and others become aware that acceptable use policies are not effective.

If there's one big take away from what I have written, it is to read US v. ALA all the way through.  Only then can people make an informed decision, instead of one to which they have been led.  The case decides filters are constitutional first, then it applies that decision to libraries accepting certain federal funding.  So even if the library does not accept that funding, the case remains applicable, as if that is not obvious.

Anyone wishing further information, feel free to contact me.

Please distribute this message to all members of the Board of Trustees in sufficient time so it can be read and considered before Monday night's meeting.

The town government should also have a copy as well so it can consider if the library's current policies are exposing the town to potential liability.  The following may be relevant:

Thank you very much.