Avert Your Eyes Jane Light Got $220,983 to Sexualize San Jose Children for the American Library Association 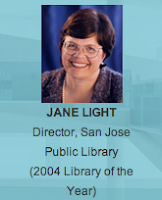 The American Library Association [ALA] misleads a third of American communities into leaving their children exposed to the very harm the Children's Internet Protection Act [CIPA] was designed to prevent. How do we know?  Ernest Istook, the CIPA author, said so a month ago.  And no library media has reported on this story, obviously having something to hide:

Congressman Istook did not say, but he was likely referencing Judith Krug, the ALA's de facto leader, who was the ACLU's three year Illinois state ACLU leader who came to the ALA and created the change within librarianship that no longer would librarians keep children from inappropriate material.  (I'm gathering people together to reverse this.)

For example, Judith Krug said:  "I have a real problem when people say, 'Well I walked by and you should have seen what was on the computer screen.'  Well, don't look, sweetie.  It's none of your business.  Avert your eyes."

Avert your eyes, says the ALA.

For $220,983/year, Jane Light has allowed the San Jose community to be one of those under the ALA's sway that keeps children exposed to harm despite the availability of CIPA:


The SJPL and SJSU Libraries adopt as policy the following:  American Library Association’s Library Bill of Rights .... V. A person's right to use a library should not be denied or abridged because of ... age ....

[T]he Library does not monitor and has no control over the information accessed through the Internet and assumes no responsibility for its content.

What drew my attention to this particularly library is that Jane Light is unique.  She is unique because she is not unique.  When it comes to using Internet filters to protect children from harm, in addition to using ALA policy as shown above, she herself echoed the exact "avert your eyes" words of the ALA's ACLU leader:

Apparently "averting your eyes" did not work to protect the "ten cases of child molestation" from the harm CIPA compliance might have prevented.  Judith Krug, Jane Light, is there a difference to the library crime victims or the children sexualized by the $220,983/year Jane Light?  $220,983 to tell people to "avert your eyes," and the policy did not even work.

By the way, for following ALA policy and not using CIPA filters, $220,983/year Jane Light quietly forced the San Jose government to give up approximately $207,825.60 during her tenure.  In 2003, the library got $25,978.20 from the federal government under the CIPA program for "Internet access."  Then CIPA was found constitutional in United States v. American Library Association, 539 U.S. 194 (2003).  (Imagine that, the ALA and the ACLU suing to stop CIPA, and losing big.)  As a result, CIPA funding for Internet access was lost since 2004.  2004 to 2011 at about $25,978.20/year comes to about $207,825.60.  So thanks to Jane Light, San Jose lost almost a quarter million dollars.  And I have concerns CIPA funding for "Telcomm" services may have been artificially inflated to make up the difference, but I am not looking into that Light-fingered aspect of the matter.  After all, numerous libraries commit CIPA fraud.

Do you want this ALA "avert your eyes" policy in your own community?  Will you avert your eyes from who's controlling your own local public library?  You better Know the ALA.