For years, this self-styled champion of First Amendment freedoms has worked to encourage public libraries to keep their computer unfiltered.  The ALA's misguided campaign has resulted in countless patrons of all ages being able to access or being inadvertently exposed to hardcore adult pornography and even child pornography on library computers.  The ALA has also filed lawsuits (and LOST) against legislative enactments requiring use of filters, and continues to disseminate questionable information to libraries about their responsibility to filter pornography.


"Our nation is now suffering an untreated pandemic of harm from the widespread distribution of pornography and the American Library Association bears great responsibility for that harm."

Experience has taught me it is the habit of the ALA and library media to ignore or censor stories or parts thereof they do not want people to hear, such as when the author of the Children's Internet Protection Act [CIPA] revealed that ALA is misleading libraries nationwide.  A story as significant as that was intentionally not reported while the Library Journal's former Editor-in-Chief Francine Fialkoff mocked the CIPA law's author, Ernest Istook.  Such censorship and animosity makes such stories all the more interesting and important, does it not?

Read MIM's letter to ALA, links and graphics below mine:

We are writing you to express concern regarding your support of the distribution of hardcore, possibly obscene pornography in public libraries across America.

Public statements and advice to public library administrators by officials of the American Library Association, as well as materials on your website appear to favor the distribution of pornography via library computers.  At a minimum, your policy positions seem to oppose Internet filters that would block pornography for public libraries.

No public library in America is constitutionally required to provide pornography to patrons on computer or in printed publications.  This fact was made clear in congressional testimony and by the U. S. Supreme Court when the Children's Internet Protection Act was considered.

Shortly, Morality in Media will publicly announce the "Dirty Dozen List," which contains the top promoters of pornography in America.  After careful consideration, we have decided to include American Library Association on that list.

All children, women, and men have a natural human dignity and thus a right to live in a decent society; and as the Supreme Court has recognized, obscene materials, which are inherently degrading, dehumanizing, and exploitive, violate this right.  Morality In Media exists to make society aware of the many harms of pornography; to equip individuals and families to overcome or protect against those harms; and, to advocate that all laws defending the right to be free from pornography are vigorously enforced.

Not only does pornography exploit, degrade and dehumanize the people in the films and photos, but it exploits, degrades and dehumanizes the people exposed to it, teaching them to view others as merely objects for selfish pleasure.

Our nation is now suffering an untreated pandemic of harm from the widespread distribution of pornography and the American Library Association bears great responsibility for that harm.

Adults, and even children, are developing life-long addictions to pornography.  Sexual violence against women, including rape, and sexual harassment of women are directly tied to the consumption of pornography.  On average, American children are first exposed to pornography at age 11 and many act out what they see in hardcore pornography; four out of five 16 year-olds now regularly access pornography online and many are developing life-long social/sexual problems as a result.  56% of matrimonial lawyers cited obsessive interest in pornographic websites as a factor in divorce cases they handled in the previous year.  There is increased demand for child pornography because adult-porn users are finding that they are no longer excited by adult images—and pornography is a contributing factor in the increased demand for sexually-trafficked women and children in the U.S.

A wealth of peer-reviewed research demonstrates the many other harms of pornography.  We maintain a database of such studies at PornHarmsResearch.com.

We also have many testimonials from people formerly caught up in the pornography industry, of being exploited, given illicit drugs, coerced to perform objectionable acts and therefore sexually trafficked in violation of the U. S. Trafficking Victims Protection Act.

It may be easy to detach from the issue and consider pornography as a mere profitable part of modern life—but only by avoiding common sense.  We at Morality in Media have dedicated countless hours to researching pornography and promoting awareness to its many devastating harms and thus we urge you to consider a different course and discourage public libraries from allowing pornography.

The following stories are directly relevant:

In addition to the above cover up, another indication little will be done is the ad hominem response of a number of librarians:


@acoulon Also, it's run in part by the Safe Libraries guy, so this is just another outlet for him to grind his ax against the ALA.
— Andy Woodworth (@wawoodworth) April 2, 2013


In the following graphic, discussion about the ALA's inclusion in the "Dirty Dozen List" at an open Facebook group called ALA Think Tank—that is not open to me because the free speech advocates block me—turned to me when I committed the free speech sin of—retweeting someone.  See how they talked about/recommended blocking me.  One admits she is "passive aggressive" towards me and calls me "that crazy virgin from Safe Libraries."  The next one is concerned people might be exercising their freedom to read. 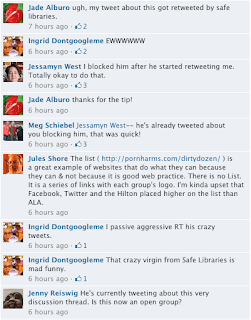 By the way, that "Ingrid Dontgoogleme" woman is the very same one who practices censorship and redacts comments to push her political viewpoint on others in her public library and on anyone who will listen and follow: click here for details if interested.

The point being, if librarians are going to be mocking people for reporting on those exposing the ALA's policies that harm communities, very little will be done to change those policies.  If the people responsible for those policies are doubling down on them, expect more communities to spread more harm to more children.

Let me remind you what leading librarian Will Manley said about the library profession:

See also continued news and advocacy group coverage of the "Dirty Dozen List" and the ALA's inclusion on that list:

I challenged the ALA to debate the issues, and I published that challenge in a comment to "Filtering and the First Amendment," by Deborah Caldwell-Stone, Esq., American Libraries, 2 April 2013.  American Libraries is the ALA's monthly membership magazine.  After almost a day, the ALA removed, censored out?, the comment, as it does frequently, so I'll republish it here:

REQUEST FOR DEBATE
Dear Ms. Caldwell-Stone,
I hereby request a debate with you or the ALA OIF Director Barbara Jones on the issues that you raise here or on related issues. Yes, I am indirectly the reason the ALA is in the news as a porn facilitator that caused you to write this piece, but that only makes debate with me more interesting. We once both appeared on an NPR radio broadcast, and you/OIF have several times talked about me publicly when I was not present, but it is time we meet and talk face to face in a forum where people can learn from what we say. Perhaps at an ALA annual meeting, for example.
So what do you say, will you or a suitable alternate accept the challenge?
Thank you for your consideration.
-Dan Kleinman of SafeLibraries

I have been blocked from viewing the open Facebook group called ALA Think Tank, likely in response to what I reported about it above.  I just sought membership in the group since they were discussing me negatively.  I guessed there was a technical problem so I tried twice more; it is just a single click to try to join.  Finally, I was accepted into the group by JP Porcaro (John Porcaro resume).

Within seconds he immediately blocked me.  So he only accepted me to block me, since one can't block people not already in groups from Facebook groups, only those already in the group.  And JP was named by Library Journal as a 2012 "Community Builder" Mover and Shaker.  Now he's a "virtual services" librarian at New Jersey City University protecting free speech.  What he really is is a pro-censorship librarian.  The double standard is unbelievable.

I met him and spoke with him at a New Jersey Library Association meeting.  He was very nice.  Now he's a very nice censor.

American Libraries magazine continually removes my debate challenge.  I had reposted it since other comments had been posted so I assumed out of an abundance of fairness despite past history that a technical glitch had occurred.  I was wrong.  My second comment was removed as well.  This time, Beverly Goldberg, American Libraries Senior Editor, responded online with "COMMENT REMOVED; A comment has been removed for violating American Libraries' comment policy."

Look at the policy.  It says, "editors reserve the right to remove any comment deemed offensive; Please stay on topic; No defamatory remarks about other people; No cursing or pornography; No advertisements or spam; No politics external to ALA or endorsement of any candidate in an ALA election; No organizing boycotts."  That sounds perfectly reasonable, on its face.  But, as applied, or perhaps despite the policy, my comment was removed.  Read my "REQUEST FOR DEBATE" comment above to see for yourself if my comment violated ALA policy in any way.

So this time, after the second comment removal, I replied with a new comment.  And I might as well put it here since the ALA will likely remove it:

Beverly Goldberg, you or someone at American Libraries removed my comment a second time.  A comment to an article about free speech and censorship, you removed it.  A simple request for a debate on the issues raised by the OIF in its response to the ALA being listed as one of the nation's leading porn facilitators that made national news such as on NPR, based in part on what I have published about the ALA's activities.  It appears you are simply deleting speech that you do not like.  You really need to specify exactly how my comment violated your comment policy.  If you state it is because I included a link under my name, that is not good enough since your comment software specifically asks people to include their "Homepage," then links that home page to their name.  I did not in any way whatsoever violate your comment policy, so you need to explain it so I can make comments here and not have them censored out.

Beverly Goldberg, you really, really have to explain how the comment violates your policy in any way whatsoever.  I am noting how you continually censor me out, and others are noting that as well, such as on LISnews, and it harms ALA efforts to appear to be censorship experts.  Real censorship experts do not censor out calls for debate on issues of national news by the very person largely responsible for that news.  So be very specific and explain exactly how the comment I left violates your comment policy in any way whatsoever.


Honestly, how can the ALA expect to be taken seriously on censorship when it silences debate using the very means it claims to oppose, namely, censorship?  Here's a graphic, FYI: