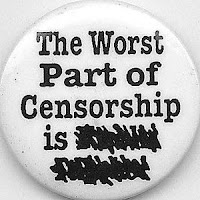 The American Library Association [ALA] has again been caught hiding data on "banned" books:


So I got in touch with the ALA to get the full data set, and to verify that its numbers were sound. That proved problematic.
....

I was hoping to find out more about challenges to “Tango” — what types of challenges have been made, how the challenges were relayed to the ALA, etc.  But I soon found there was no way to get any raw data about challenges, as the Office for Intellectual Freedom refused to give me access to its database or any more details about the methodology behind its collection of challenges beyond what’s on the website.  In my initial interactions with the ALA, a spokesperson offered to schedule an interview with someone “to get a perspective beyond the numbers,” but despite repeated requests, no one was made available.  I was, though, given this statement: “OIF maintains the database for internal staff use, as a means of encouraging libraries to report challenges, and to create awareness of the importance of protecting and celebrating the freedom to read.  Because the censorship database does not have the statistical validity demanded by many social scientists and researchers and may be vulnerable to misinterpretation and misuse, we must deny any request asking OIF to share raw data.”

The American Library Association is saying that its challenge database isn’t statistically valid and that despite the hundreds of news articles about its list, the database is not meant for public consumption.  I sent a list of follow-up questions about the database and the publicity around it, but an ALA spokeswoman said no one would be able to comment until at least July, citing busy preparations for the organization’s upcoming annual conference.

The list’s statistical validity is in question because we have little idea how it is put together.  We don’t know how challenges are collected — based on past descriptions from the OIF, it seems like an amalgam of news reports and calls from concerned librarians.  We also know that at least one author self-reports challenges: Parnell tells me that he lets the ALA know whenever he hears news of “Tango” coming under fire.  (Whether those reports make it into the tally or not is unknown.)  In addition, the ALA’s system seems to be agnostic to the type or severity of the challenge or its effectiveness. A parent questioning whether a Batman picture book is age-appropriate for the kid shelves appears to be given the same weight — a “challenge” — as a school board removing “Adventures of Huckleberry Finn” from the syllabus of schools throughout an entire county.

“We lose a bit of our rhetorical power when we put them under the same umbrella,” said Jessamyn West, founder of Librarian.net, a popular progressive site about librarian-related issues.  A former ALA councilor just a decade ago, West is no longer a member and has used her site to note her issues with conflating these very different types of challenges, noting that questioning whether something is age-appropriate is very different from wanting it gone altogether.  “How we count things and how we reflect those to the people is super important,” she told me.

It may not be rigorous or even particularly accurate, but the ALA’s yearly list has drawn attention to many books.  Perhaps as a result of that spotlight, “And Tango Makes Three” has been a huge hit, at least as far as books go.  It has been debated on “The View.”  A decade after it was published, customers still buy dozens of copies a day on Amazon.  It has been translated into 11 languages and even turned into a play.  Simon & Schuster released a 10th anniversary deluxe edition of the book in early June, complete with an audiobook narrated by Neil Patrick Harris.

In the accompanying press release, David Gale, a vice president at Simon & Schuster, says: “Although ‘And Tango Makes Three’ has been on ALA’s list of ‘Most Frequently Challenged Books’ many times, readers worldwide have embraced its heartwarming message about the true nature of family and love.”  Gale’s quote begins with “although,” but the more appropriate word may be “because.”  Sometimes controversy can get a book — or a list — some extra attention.

I say again because I exposed a recording I made of an ALA-listed author admitting that ALA fakes its annual list.  And I spoke directly with the man at ALA who compiled the list one year and he too admitted ALA faked the numbers ("dozens" was really four).  I stopped "And Tango Makes Three" from being falsely listed after five years straight and thereby hurting the LGBT community with faked claims of discrimination:
Notice how ALA would not answer that reporter's questions, dragged things out interminably, then refused to answer his questions.  It is one way ALA continues to get away with making up the numbers, by never responding to requests for information by reporters that ALA thinks might hurt ALA's agenda—except that one time that one ALA employee answered my questions, revealed ALA faked the numbers, then was somehow no longer working with ALA, the Office for Intellectual Freedom specifically.

Then reporter David Goldenberg zeroed in on exactly what I already reported, namely, one librarian gently points out so no one hears how she knows ALA is misleading people, and he cites the very source I already cited.

More significantly, ALA fakes the numbers of "banned" LGBT materials to whip people up into a frenzy.  As David Goldenberg put it, "Sometimes controversy can get a book — or a list — some extra attention."

Bingo.  Who cares if the LGBT community gets harmed in the process, right?  The ends justifies the means.

And I reported this four years ago.  Only now is a single reporter finally raising the issue again and finding the same deception.

How many more years will it take for main stream media to finally stop reporting on falsified numbers based on smoke and mirrors?

Stung by the truth and its being so publicly available, ALA OIF has gone on the offensive, responding repeatedly on Twitter and with a blog post that absolutely misleads people and completely ignores that it has been caught faking data and removing "And Tango Makes Three" from the list as a result.

How dare a "freelance journalist question[] ALA Office for Intellectual Freedom's reputation and professionalism"!  Protest too much?  Read:

Even the author can see he is attacked by ALA's "Office for Intellectual Freedom" that cannot stand anyone exposing how it manipulates people, data, media, etc.:

The @ALALibrary releases a combative response to my @FiveThirtyEight article about its database of challenged books http://t.co/rPVk0rK6BY
— David Goldenberg (@dgoldenberg) June 23, 2015

Of course it would be helpful to include the link to the press release: http://t.co/gxwSx9NHaF
— David Goldenberg (@dgoldenberg) June 23, 2015


URL of this page: tinyurl.com/ALACaughtAgain