Librarians Admit Banned Books Week Is a Hoax, Bash Trump and Breitbart, Then Censor It All 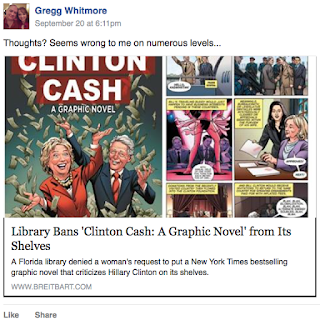 Gregg Whitmore:
Thoughts? Seems wrong to me on numerous levels...

Library Bans 'Clinton Cash: A Graphic Novel' from Its Shelves
A Florida library denied a woman's request to put a New York Times bestselling graphic novel that criticizes Hillary Clinton on its shelves. 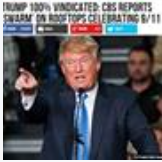 Source of archival copy, collected 25 November 2016:
tinyurl.com/ALATTcensorship
(where ALATT = ALA Think Tank)
The archival copy shows all the typical Facebook graphics, notations, and indentations that I removed from my republication above for readability/searchability reasons.

I know of no other source for this post/document that the ALA people censored.  I'm happy to resurrect it and make it available for public discussion.

As stated, the above discussion has been censored from the ALA Think Group public Facebook group.  It now appears as follows—note the statement in the lower left (and the "revolution" graphic of the Black Lives Matters hate group that ALA pushes into public schools):

I was able to obtain a copy, before it was censored, of course.  I republish it as a courtesy to those seeking to expose how the American Library Association [ALA] harms communities.  It contains admissions and statements that go against the usual picture of good librarians caring for school children and communities.  These librarians are instead mocking patrons and otherwise showing they are social justice warriors, not civil servants acting in the public good, actively working to shape what patrons see.

Not all, of course.  Some librarians did indeed stand up for patrons and for common sense.  But the group counterattacks scare off many.  Even the first comment was to attack the messenger for posting a Breitbart News link.  I myself, a volunteer librarian, have been blocked from seeing, let alone commenting upon, this "open" Facebook group run by ALA heavyweights.

Why this matters: The censorship was done by the very same people who claim it is censorship to keep school children from inappropriate material in public schools.  It was done for the purpose of censoring their admissions that so-called "Banned Books Week" is a hoax.  As one candidate for ALA President put it (and the guy who blocked my access, self-arrogated free speech proponents that they are):


this is partially librarianship's fault. as long as we are out there banging the "banned book!!" drum for books that actually arent "banned" and are widely available everywhere, this is what we get. We get other people bending the definition of a banned book just as we ourselves bend it.


Something is banned ("banned and challenged," but "banned" for public purposes) if a cranky private citizen writes a comment card against an available book, and the library staff appropriately do nothing whatsoever about it. But nothing that trained librarians do in the field of acquisition and weeding, although government employees, can ever quality for a spot on the banned-and-challenged continuum.

Correct.  And that's how books about ex-gays are banned by ALA and children's Rush Revere books by Rush Limbaugh are banned, even during Banned Books Week.  See:
It also exposes just how much librarians hate conservative ideas, Donald Trump, and Breitbart News.  Seething hatred.  Just read it.  No wonder they deleted it.  No wonder I resurrected it.

It also exposes how librarians practice their own brand of censorship that never makes it into ALA's "Banned Books Week" hoax list, as the one librarian pointed out, like the library director who threw Jerome Corsi's New York Times #1 Bestseller out the front door for obvious political reasons, then said it is now missing:


I once had a director take the swiftboating book on John Kerry off the shelves. He asked me where it came from and I answered that it was a donation. He opened the front door and tossed the book out the door. "it's missing."

Each year the American Library Association fakes stories about Banned Books Week and leaves out its own censorship.  The first commenter on the ALA Think Tank post above, who immediately went negative by questioning why anyone would link to Breitbart and mocked the library patron for claiming the Clinton Cash graphic novel was "BANNED," worked directly with ALA's "Office for Intellectual Freedom" to increase the efforts to dig up false censorship cases.  No book's been banned since 1963, for example, so all censorship cases ALA has uncovered since BBW started in 1982 by ACLU/ALA's Judith Krug are false censorship cases.  All of them.  Yet ALA keeps digging for more:

Here we see the very same people involved with that Banned Books Week hoax are themselves censors when they need to hide their own censorship and their own hatreds.  They admit Banned Books Week is a hoax, bash the President and conservative media, then censor the whole conversation.  Only the got caught at it.

Do not believe the ALA hoax any longer:

—
URL of this page:
safelibraries.blogspot.com/2017/02/librarians-admit-bbw-is-a-hoax.html