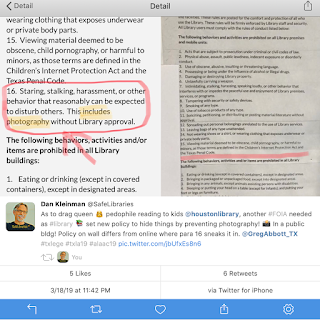 "Library Rule & Policies" was updated to include "16. Staring, stalking, harassment, or other behavior that reasonably can be expected to disturb others.  This includes photography without Library approval." Source: https://houstonlibrary.org/library-rules-policies

For the remainder of this TPIA request I shall refer to this policy addition as "Rule 16."


Here are my TPIA/FOIA requests, given changes to public policy must be discussed in open public meetings, followed by introductory information:

1) Provide documentation of the exact date when "Library Rule & Policies" was updated to include Rule 16.  I'm not asking for new information or a new document to be drafted in response to this request.  Rather, I am asked for existing documentation, such as an email, a memo, a comment in a web page, a date listing from a web site source repository.

3) Provide a recording(s) of the public discussion(s) of Rule 16 at library/city boards or library/city administrations public meetings.

4) Provide a transcript(s) of the public discussion(s) of Rule 16 at library/city boards or library/city administrations public meetings.

5) Provide minutes of the public discussion(s) of Rule 16 at library/city boards or library/city administrations public meetings.

9) Provide copies of training materials or example policies that recommend a policy against taking pictures in public of public buildings or the contents of the buildings or people observed in this buildings and that were used in researching, drafting, or promulgating Rule 16.

10) Provide documentation of all "library approvals" that are required by Rule 16.

11) Provide documentation of all library disapprovals given under Rule 16.

12) Provide documentation of the rules by which librarians or library directors are to determine whether or not to grant approval for photography under Rule 16.

13) Provide documentation about how and when library signage is to updated to match the library's online content, such as Rule 16.

To assist in responding, above right shows graphics of Rule 16 absent from policy posted within the library, as it appeared last week, yet present in policy available online.

Now here is the introductory information promised above.

The Texas Public Information Act [TPIA a.k.a. FOIA] gives the public the right to request access to government information. The same applies to the Houston Public Library pursuant to www.houstontx.gov/pia.html that specifically names you as the TPIA contact for the library. Therefore, please respond to the above noncommercial TPIA request in accordance with the law.

I am a reporter on library matters where I publish on both SafeLibraries and on Sexual Harassment of Librarians. As such I may publish anything you send me, and I ask that all fees for the production of TPIA responses be waived, as they have been implicitly in my first request per order of the Texas Attorney General.

Indeed I have written about your library before:
Further, others have written about me with respect to Houston Public Library allowing a convicted pedophile to read to children during Drag Queen StoryTime.  The point is I am a reporter on library matters so I should not be charged a fee.

As to the reduction in fees, "If a governmental body determines that producing the information requested is in the 'public interest' because it will primarily benefit the general public, the governmental body shall waive or reduce the charges." "Shall," not "may."  Source: https://www.texasattorneygeneral.gov/sites/default/files/2018-06/PIA_handbook_2018_0.pdf 194; Gov’t Code § 552.267(a). That this is a matter of public interest is evident by the international media attention the library has received as a result of the library's admitted "oversight" in allowing a registered child sex offender to read to children at Drag Queen StoryTime.

Any document written or recorded is included as well. That includes voice mails, audio recordings, transcripts or minutes of any public meeting. Library board executive session recordings or minutes are not included in my request if they have not already been made public.

Written or recorded documents also include those made in any telephonic, electronic, or physical meeting with anyone acting on behalf of any library association such as the American Library Association [ALA]. ALA trains librarians that written or recorded documents from ALA-provided trainings, meetings, conferences, etc., are ALA proprietary and may not be released publicly. That ALA claim is false. TPIA controls, not ALA. If a public employee attended anything at public expense, then anything learned/recorded at such an event or as a result thereof has been made public and is discoverable under TPIA no matter what ALA claims. The public has a right to know what business has been conducted at public expense, especially where the library goofed, allowed a pedophile to read stories to children, and is now seeking to expand the drag queen story hour program further.

Be clear ALA top leadership uses personal email to direct librarians to destroy public documents precisely to prevent production under state sunshine laws like TPIA. Example from the private email of the current Interim Director and Deputy Director Deborah Caldwell-Stone, Esq., of the ALA Office for Intellectual Freedom: “Subject: URGENT -­ must delete all documents related to 17 Dec crisis communications workshop .… Remove these from your servers today and destroy hard copies. This is an attempt by two individuals to obtain privileged information …. we cannot allow anything from 17 Dec to be produced in response to FOIA.” Source published here:
Thank you very much for your attention to this matter.

[NOTE: If any librarian wishes to contact me privately/confidentially, perhaps to provide some of this documentation, use SafeLibraries@pm.me.]

Yesterday the library offered to provide me a diskette (I asked for documents to be delivered electronically since computers no longer have disk drives) for $19 (I asked for fees to be waived for media) for responses only to #1, #9, and #13 (I asked for 14).


Your documents for your request submitted on March 26, 2019 are ready.  The City was able to locate responsive documents for Items 1, 9 and 13.  No other responsive information was found.  Please see the cost estimate attached.

Here is the email I received plus the attachments:
"No other responsive information was found."  That means either there's no documentation that was found for requests #2-#8, #10-#12, and #14, or they determined the documentation was not responsive.  My requests were clear and specific so I'm going to go with the former, especially since the fast timeline would not have allowed for any public meeting with proper notice to have taken place.

That means I'll be getting documentation of 1) the date policy was updated to include Rule 16 that deems photography to be "reasonably ... expected to disturb others," something I doubt since others the library approves take photographs and movies at a public event in a public library where there's zero expectation of privacy, and at a public exposition, no less, that features public performers making public performances, but I digress.

I'll also get 9) copies of training materials or example policies that recommend a policy against taking pictures in public of public buildings, and 13) documentation about how and when library signage is to updated to match the library's online content.

Here's what I will not be getting because "[n]o other responsive information was found": 2) the date/location, 3) recording, 4) transcript, nor 5) minutes of the public meeting where Rule 16 being added to the policy was discussed in public—because it did not occur—and that is a violation of the open public meetings act.  A library simply may not make up policy as it goes.  It is required to discuss policy changes in public.


Similarly, because the public meeting to discuss Rule 16 never occurred as required by law, there's no documentation of 6) recordings, 7) transcripts, nor 8) minutes of public comments made at the meetings that did not exist in violation of the law.

Furthermore, apparently there have been no 10) library approvals nor 11) disapprovals given under Rule 16.  I suppose that is to be expected since the rule is so new.

But documentation already exists that the library has already applied Rule 16 and blocked photography by certain people.  So the library has already applied Rule 16 and apparently never documented that it did so!  The documentation comes from one of the whistleblowers, who the American Library Association labeled as a "censor" during National Library Week—the "censor" is actually being actually censored by an actual government employee, but that's okay with ALA.  Watch the censorship in action:


That recording was published on 14 March 2019 by "MassResistanceHouston Texas," one of the whistleblowers ALA labels as a "censor."  The library is literally censoring the whistleblowers who exposed registered sex offenders, including a pedophile who read to children at Drag Queen StoryTime.

The library could also provide no 12) documentation of the rules by which librarians or library directors are to determine whether or not to grant approval for photography under Rule 16.  So what the library did to block the photography from taking pictures was arbitrary and capricious!

I'll have to look into the issue of any open public meetings violations and any First Amendment rights violations, or perhaps other violations, in a future publication, or otherwise refer this matter to someone else interested.

The picture of a library hiding something serious and harmful is slowly coming together despite the library's and the City of Houston's obfuscations.

URL of this page:
safelibraries.blogspot.com/2019/03/foia-request-3-houston-public-library.html