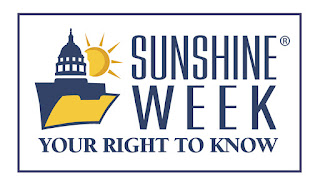 The Houston Public Library had to be forced by the Texas Attorney General to release public documents on drag queens reading to small children during library-endorsed programming.  This during Sunshine Week and Open Government Week.

The leading question is exactly why did the library go all the way to Texas Attorney General Ken Paxton to try to delay and quash three separate requests for public documents relating to drag queens reading to children?  I do not know yet, but it seems apparent they have something to hide.  We are talking about a public library that supposedly supports freedom of speech and intellectual freedom, yet this library suppressed just that, spending who knows how much money in legal fees, even though sunshine laws compel production of such documents, at least in my case.

[Note added 15 March 2019: It appears I was spot on.  The library admitted to allowing a registered sex offender to read to children at Drag Queen Story Time.  This may be related to why the library acted as it did.  The library is quoted on KHOU to have said, "“WE DEEPLY REGRET THIS OVERSIGHT AND THE CONCERN THIS MAY CAUSE OUR CUSTOMERS. WE REALIZE THIS IS A SERIOUS MATTER.”  Just an "oversight."  I see.  More Drag Queen Story Times are scheduled.]

I have not seen the other two FOIA requests on that library (called TPIA in Texas), but mine was directed toward whether the library was following the law and its own policy.  I cannot yet say much else because I have yet to receive the documents the Attorney General ordered to be released to me and others.  And I may have to file additional FOIA requests.

By the way, here's the Bible of filing FOIA requests on libraries that have something to hide, and I recommend this book as a result:
So that's all I have now.  More as news develops.  And the documents I received today are republished before after conversion to text format.

Here's what I wrote in the past on this issue:
See also:
My secure email (that only I get and that no company like Google, Facebook, Twitter can read) is SafeLibraries@pm.me, should anyone wish to contact me via that means.  LIBRARIANS WORKING AT HOUSTON PUBLIC LIBRARY are welcome to contact me there or to send documents to me there, especially ones your library may be ordering you to destroy.

Re:    Your Texas Public Information Act request received on December 26, 2018, for various information regarding the City of Houston Public Library and Drag Queen Story Hour; Attorney General Informal Letter Ruling OR2019-06437. GC No. 25685

As you are aware from your copy of Attorney General Informal Letter Ruling 2019-06437, the City has received a response to our request for an opinion from the Attorney General. Because the Attorney General has determined that we must withhold portions of the information you requested, may withhold other portions, and must release the remainder of the responsive documents to you, we are closing our file on this matter.

By copy of this letter, we are requesting that the Houston Public Library provide the responsive documents to you in accordance with the Attorney General's ruling.  If you have a question about your public information request, please contact Marjorie Gonzalez at (832) 393-1340.

The City of Houston and the Houston Public Library (collectively, the "city") received three requests from different requestors for information pertaining to specified policies of Houston Public Library (the "library") and the Drag Queen Story Hour during specified periods.[1] You state the city does not have information responsive to portions of the requests.[2] You claim the requested information is excepted from disclosure under section 552.103 of the GovernmentCode. We have considered the exception you claim and reviewed the submitted
----------
[1] We note you sent the first requestor an estimate of charges pursuant to section 552.2615 of the Government Code. See Gov't Code § 552.2615. The estimate of charges required the requestor to provide a deposit for payment of anticipated costs under section 552.263 of the Government Code. See id. § 552.263(a). You inform us the city received the required payment on December 6, 2019. See id. § 552.263(e) (if governmental body requires deposit or bond for anticipated costs pursuant to section 552.263, request for information is considered to have been received on date governmental body receives bond or deposit).

representative sample of information.[3] We have also received and considered comments from the third requestor. See Gov't Code § 552.304 (interested party may submit comments stating why information should or should not be released).

Initially, we note the first requestor asks the city to answer questions. The Act does not require a governmental body to answer factual questions, conduct legal research, or create new information in responding to a request. See Open Records Decision Nos. 563 at 8 (1990), 555 at 1-2 (1 990). However, a governmental body must make a good-faith effort to relate a request to any responsive information that is within its possession or control. Open Records Decision Nos. 561 at 8-9 (1990), 555 at 1-2. We assume the city has made a good-faith effort to do so.

Next, we note the third requestor asserts the city failed to comply with the procedural obligations under the Act with respect to his request. Pursuant to section 552.301(b), a governmental body must ask for a decision and state the exceptions that apply within ten business days of receiving the written request. See Gov't Code § 552.301(b). The request at issue was sent to the city after business hours on December 21, 2018, and you state the city was closed on December 24, 2018, and December 25, 2018. Therefore, for purposes of section 552.301, the city received the request for information on December 26, 2018. This office does not count the date the request was received or days a governmental body is closed for the purpose of calculating a governmental body's deadlines under the Act. The city also states it was closed on January 1, 2019. The envelope in which the city submitted to this office the information required by section 552.301(b) bears a meter-mark of January 10, 2019. See id. § 552.308(a) (prescribing rules for calculating submission dates of documents sent via first class United States mail, common or contract carrier, or interagency mail). Thus, we conclude the city's correspondence to this office was timely mailed. Consequently, we find the city complied with the procedural requirements mandated by section 552.301 of the Government Code with respect to the third request.

We also note some of the submitted information is subject to section 552.022 of the Government Code. Section 552.022(a) provides, in relevant part:

(a) [T]he following categories of information are public information and not excepted from required disclosure unless made confidential under this chapter or other law:

(1) a completed report, audit, evaluation, or investigation made of, for, or by a governmental body, except as provided by Section 552.108; [and]

(17) information that is also contained in a public court record[.]

My secure email (that only I get and that no company like Google, Facebook, Twitter can read) is SafeLibraries@pm.me, should anyone wish to contact me via that means.  LIBRARIANS WORKING AT HOUSTON PUBLIC LIBRARY are welcome to contact me there or to send documents to me there.  I'm weaving this paragraph into my reporting above.

“WE DEEPLY REGRET THIS OVERSIGHT AND THE CONCERN THIS MAY CAUSE OUR CUSTOMERS. WE REALIZE THIS IS A SERIOUS MATTER.”

“WE DEEPLY REGRET THIS OVERSIGHT AND THE CONCERN THIS MAY CAUSE OUR CUSTOMERS. WE REALIZE THIS IS A SERIOUS MATTER.”https://t.co/dWO9t9JX1m #alaac19 #moms #dads pic.twitter.com/ioOJINrrLl
— Dan Kleinman (@SafeLibraries) March 16, 2019

I found the opinion I published above has a citation having been officially reported:

URL of this page:
safelibraries.blogspot.com/2019/03/houston-library-forced-foia.html