NOTE 7 DECEMBER 2022: I'm going to try to update this.  Things have gotten worse in 11 years.  So this is a work in progress until this message disappears.
KNOW THE AMERICAN LIBRARY ASSOCIATION
The ALA is Terrorist Friendly, Child Unfriendly, and Dishonest

CHATHAM, NJ, Jan. 4, 2012, updated Dec. 7, 2022 (coming soonish) — The American Library Association [ALA], once a trusted source for information, has become terrorist friendly, child unfriendly, and dishonest/unethical.  Claiming a 9/11 terrorist's library patron privacy rights were violated is one example.  Faking its annual top 10 challenged books list is another.  Dan Kleinman of SafeLibraries provides irrefutable proof.  For example, he made a recording of an author admitting the 2010 top 10 list is faked.  While the ALA claims to be devoted to library services and librarianship [EN 1], it has extended beyond its mission [EN 2] to promote causes having nothing to do with librarianship.

The ALA changed when an Illinois state ACLU leader named Judith Krug joined the ALA then created the Office for Intellectual Freedom and the Freedom to Read Foundation. [EN 3]  In control for around 40 years until her death, she single handedly changed the ALA from within. [EN 3]  No longer would ALA members protect children from harm.  Knowing the ACLU "has baggage," [EN 4] she used the ALA as the pretty face to effectuate ACLU policy.  ACLU policy is now ALA policy.  "And frankly, you can't say bad things about a librarian without sounding like kind of a jerk." [EN 5]

The significance is that the ALA has and continues to seek major influence in American schools and libraries.  Seeing the opportunity, major donors like George Soros give generously to the ALA where he creates a "privacy" curriculum for K-12 public school children that the ALA then distributes, giving it legitimacy.  That curriculum includes propaganda having nothing to do with privacy [EN 6] and how to get around parental Internet filters, jailbreak devices, etc. [EN 7]  Following Judith Krug's lead, George Soros is using the ALA as the pretty face to obtain access to American school children and American communities.  And a privacy curriculum for children has nothing to do with librarianship, the ALA's supposed mission.

Here is a succinct listing of ALA activity so people can know the ALA.  When people know the ALA and its dishonest/unethical activities, they will be less susceptible to its misinformation.  This list will contain new information as well as material I have already published.


ALA is Terrorist Friendly

ALA is Child Unfriendly


ALA Funding from George Soros

Barbara Jones:  "My Office just had this nifty, big, grant from the Soros Foundation to do the work with newsrooms and with media and with journalists.  And my question to you is, we just got it, and we're just still thinking and formulating.  What might we do?  I mean journalists and librarians have been meeting together now for about a year, about things we have in common, and stuff like that."

Sandra Braman: "Under the content, under the umbrella of the ALA or?"

Barbara Jones:  "No. The first meeting was in Boston adjacent to the national conference on media reform.  And we had a meeting at MIT about, called "Beyond Books" about libraries as (?).  .... But, I'm just trying to think I mean we have this money to do some stuff to think and do things." [EN 30]

ALA Use of Dishonest/Unethical Means to Promote Interests
ALA Sexualizes Children Knowingly, Intentionally, and Purposefully
End Notes


About Dan Kleinman of SafeLibraries

Dan Kleinman of SafeLibraries has been addressing library safety issues relating to American Library Association policy for over a decade, ever since his own kindergartner was victimized by the ALA's anything-goes policy.  He is recognized by the ALA as its leading critic.  He assists community members, governmental leaders, school superintendents, media members, law enforcement, lawyers and legislators with seeing through ALA propaganda and addressing the negative effects of ALA policy that sidesteps the law, community standards, and common sense—see, e.g., his Making Public Libraries Safer publication.  He has been involved in hundreds of cases in the USA and Canada, some more publicly than others, such as exemplified by his front page USA Today appearance.  One example of his success is that Iowa sought legislation requiring statewide library filtering as a direct result of his involvement in uncovering the cause of a Des Moines public library restroom toddler molestation, namely, a lack of Internet filtering in deference to ALA policy. 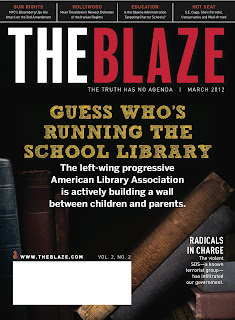 Ernest Istook, the author of the Children Internet Protection Act, has spoken against the ALA for forcing its way into a third of American libraries, to the detriment of children.  I have been saying this for over a decade, I just did not realize it was that bad, though I am sure it is.  What a pleasure to get confirmation of my work by none other than the author of CIPA:
Also, Barbara Jones of the ALA's OIF continues to gush about George Soros's Open Society Institute, displaying its propaganda, etc.  See/listen for yourselves as the ACLU-engendered ALA OIF expands the definition of librarianship to include responsibility for teaching the George Soros version of "privacy" to school children nationwide:
The Blaze Magazine, pictured to the right, has picked up on what I have written here and has made the issue the cover story for March 2012:

Those wishing to learn about George Soros whose money the ALA so gleefully accepts should read:

In depth details about George Soros:

George Soros is also funding voter fraud efforts in numerous states.  So he funds the ALA for the "privacy" fraud, and now he's seeking to throw American elections.  People should know who's funding the ALA, a guy seeking to steal your country away from you, a thief, an enemy of the US Constitution.  The ALA should disassociate itself from this American enemy, but it won't:

The ALA's OIF and its George Soros-funded efforts to teach children nationwide Soros's "open society" political views via the ALA has now been given an award from "Consumer Action"—for "protecting consumers [and] immigrant communities" in a manner having nothing to do with librarianship, the mission of the ALA:

This could in part explain or reflect the ALA's anti-Israel actions and censorship, given the major funding it gets from this man: