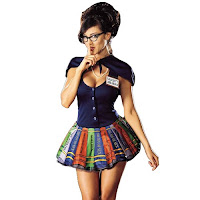 The following article is very interesting for ALA-ophiles, but I warn you, it (and this blog post) contains salty language and the picture to the right from the site:

Dig the part about the likely ALA member censoring other ALA members, then preventing access to past tweets. Don't you love the double standard when the ALA censors people (like Robert Spencer of JihadWatch? Ginny Maziarka of West Bend Citizens for Safe Libraries? Greg McClay of SHUSH? Myself?), but legally keeping inappropriate material from children is derided by the ALA as censorship?

Notice how the censorship was done in a surreptitious manner:

Well, it saddens me that a member of the library profession took exception to @alasecrets and shut it down by logging in and changing the password. They protected the updates thereafter so, supposedly, people couldn’t see them.

You’re going to have to pardon my language here but FUCK that. I despise censorship in any form and I especially loathe the idea that a librarian shut down that Twitter account. So I did something about it.

I'm considering adding these librarians who oppose ALA censorship to my "Good Librarians" page.