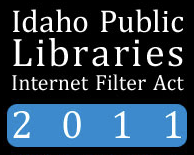 "Idaho Legislation to Safeguard Internet Use at Public Libraries Wins Final Lawmaker Approval," by The Associated Press, The Republic, 5 April 2011, reprinted under §107 Fair Use:

BOISE, Idaho — Legislation to require library computers to use filtering software to block content deemed offensive to minors has cleared the Idaho Legislature.

The Idaho House voted 69-0 to approve the bill on Tuesday, sending it to the governor's desk.

The measure was amended since first introduced in the 2011 session and now gives more libraries flexibility in blocking content and deciding when filters should be turned off.  The measure would also not go into effect until October 2012, giving libraries time to make all necessary changes or upgrade filtering software.

Republican Rep. Mack Shirley of Rexburg says the changes to his bill emerged from discussions with the Idaho Library Association.

A previous version of bill would have withheld public funding for libraries that didn't comply with the new rules.

Congratulations to Citizens for Decency and all citizens of Idaho.  69-0!  Outstanding!

My previous post on this topic was:
Click for further information on HB205, the 2011 Idaho Public Libraries Internet Filter Act, now ready for the governor's signature.