A Harris Poll shows, "A majority of Americans say ... that books with explicit language should not be available to children in school libraries (62%)."  Source: "Most Americans Opposed to Banning Any Books; Large Majorities, Including Most African Americans, Oppose Changing 'Nigger' to 'Slave' in 'Huckleberry Finn'," by Samantha Braverman, The Harris Poll® #47, 12 April 2011.

The Harris Poll tested "2,379 adults (aged 18 and over)" and showed that most people oppose banning books.  No kidding.  That is not the most interesting part of the poll since no books have been banned in the USA for about half a century, the last being Fanny Hill.

The most important information revealed by the poll was in response to the question, "Do you think that children should or should not be able to get the following books, or types of books, from school libraries?"  On average, 62% percent opposed "books with explicit language."  No other category rated higher.

Here is an interesting breakdown that shows, among other things, opposition to explicit books in public schools rises to 74% in certain groups:

That evidences that the majority of the public opposes school library books having explicit language.  See Board of Education v. Pico, 457 U.S. 853 (1982), allowing for the immediate removal of such books from public schools.

ALA and NCAC Awards Librarians Who Oppose Community Standards

The ALA and the NCAC, for example, award school librarians when they reflexively report to them and support allowing public school children access to explicit material.  See, for example, "School Media Specialist Passes Sexual Content Review to Students; Dee Venuto Says It Is Discrimination to Keep Children From Material Including Lengthy, Vivid Descriptions of a Ménage a Trois."  One of the books that public school librarian Dee Venuto supported for children included the following depiction: 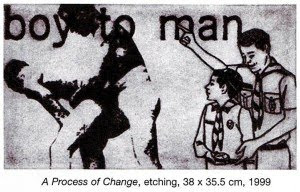 The Harris Poll itself has been used by the library community for propaganda purposes.  By leaving out the information that most people oppose explicit material for children in public schools, the poll takes on a misleading light.  Read this for yourselves and see if you agree, and notice the information about the explicit books is completely missing:  "Most Americans Opposed to Banning Any Books," by North Dakota Library Association, Intellectual Freedom Blog, 14 April 2011.

That is copied wholesale, by the way, from the Harris Poll without attribution, in other words it was plagiarized, but by itself it presents an incomplete story, therefore it is misleading.  By contract, here is a media source that gives the whole story along with proper attribution:  "Most Americans Opposed to Banning Any Books; Large Majorities, Including Most African Americans, Oppose Changing 'Nigger' to 'Slave' in 'Huckleberry Finn,'" by Harris Interactive, The Sacramento Bee, 12 April 2011.  Being honest and truthful is not that hard to do.  I have noticed the ALA makes a practice of plagiarism.  See also, "Most Americans Opposed to Banning Any Books?," by Rob, The "C" Word, 18 April 2011.

ALA Silence on Harris Poll Shows It Hurts ALA Efforts

The ALA itself has not addressed this particular Harris Poll.  It is my experience the ALA never reports on anything that does not favor its viewpoint unless forced to do so, such as its loss in US v. ALA.  This confirms to me that the ALA sees the results of this Harris Poll to be a threat to its efforts to convince the public not to protect their own children.  That's why I am broadcasting this threat to the ALA—because it helps communities to protect their children.  Remember, the ALA mocks protecting children, then attacks those who attempt to do so.

Lastly, here are some refreshing applications of common sense and community standards in public schools:


These people didn't let the ALA / NCAC / ACLU fool them into allowing explicit material in public schools.  You shouldn't either.  And now you have the Harris Poll for further support.

The ALA has finally commented on the topic!!!  See:
Here is the comment I added:


Notice the statistic about how people are more likely to read a book if it is "banned."  Is there an economic motive to the Banned Books Week hoax?
Posted by SafeLibraries® at 2:22 AM