American Values are 'Deeply Problematic' for the National Coalition Against Censorship; NCAC Prefers the Ghostwritten Advanced Placement US History Framework for Schools 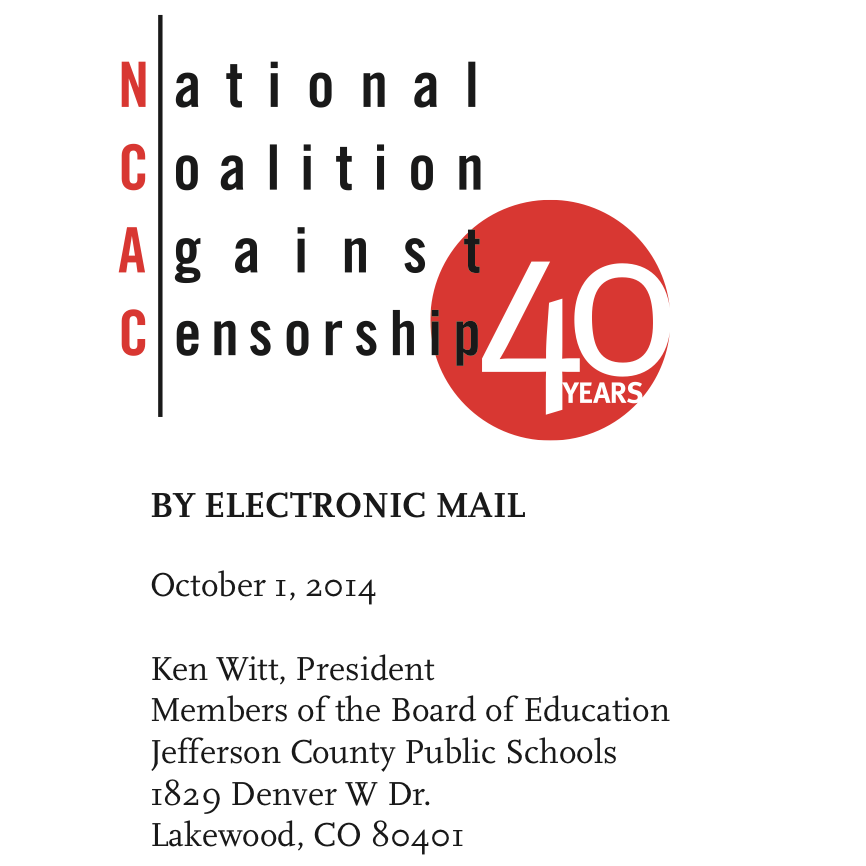 American values are "deeply problematic" for the National Coalition Against Censorship [NCAC].  It prefers the Advanced Placement US History [APUSH] framework for schools and sends misleading emails to push its view and the framework.  Below is an excerpt from that NCAC letter, my response revealing details about NCAC, then information about the APUSH framework having been politicized and ghostwritten.

We are particularly concerned about two aspects of the current proposals. The first has to do with identifying materials in the revised framework that “may reasonably be deemed” to be “objectionable.”  The second is the proposal to consider whether instructional materials “promote citizenship, patriotism, essentials and benefits of the free enterprise system, respect for authority and respect for individual rights” and whether they “encourage or condone civil disorder, social strife or disregard of the law.”

Both proposals are deeply problematic.

Dear President Witt and Members of the Board,

I have learned that the National Coalition Against Censorship [NCAC] has written to you yesterday regarding the curriculum framework for Advanced Placement U. S. History. ( http://ncac.org/incident/jefferson-county-school-board-to-review-history-curriculum/ )  It provided a warning against promoting citizenship, patriotism, the free enterprise system, and respect for authority and individual rights, calling such efforts “deeply problematic.”  It then provided legal argument it wants you to think is accurate and accurately presented.  It was signed by a number of people, principally Joan Bertin, NCAC’s Executive Director.

When considering the weight to be given such a letter, please consider that NCAC is a small pressure group that repeatedly writes to school boards to mislead them with false and misleading factual and legal information.  It is an organization that:
This past week was “Banned Books Week.”  Joan Bertin used the opportunity to call it “censorship” when a middle school removed a John Updike book after several preteens read graphic descriptions of anal s3x, s3xual urination, and ejaculating on a woman’s face, and to rail against Common Sense Media for providing information about the sexualized content of books ( http://boingboing.net/2014/09/21/another-school-year-just-start.html  http://www.vvng.com/preteen-brings-home-school-library-book-containing-sexual-content/ )

Now that same Joan Bertin that last week called it “censorship” to remove a p-rnographic book from a middle school stands before you offering factual and legal guidance for AP US History.  The guidance is intended to mislead you, as this is NCAC’s pattern, and not assist you.  The goal is to mislead you into thinking what NCAC wants you to think so you will do what NCAC wants you to do but does not otherwise have the power to force you to do.

And did you notice NCAC subtly implied teachers get to set the curriculum and not school boards?  That's false, but of course they do not inform you of that.  See:
and another community NCAC tried unsuccessfully to fool (and notice the comments have several authors of note):

Do consider what NCAC has to say, but keep in mind its past behaviors, methods, and interests so as to scrutinize its letter carefully and assign it weight accordingly.  Personally, I think promoting p-rnography in schools and the interests of a Hamas group in America is what’s “deeply problematic” while promoting American values in schools is what the American public wants and expects, what your community wants and expects.  I hope my information on NCAC helps you make the right decision for your community.

If you have any questions, or if I can be of assistance in resolving this matter, please do not hesitate to contact me.

Notice the above tweet of mine was favorited by @JeffcoPTA.

AP US History Framework is Politicized and Ghostwritten:

Usually authors are proud to have their names recognized for influential pieces of work.  Not so for the Advanced Placement (AP) U.S. history curriculum guide, otherwise known as the Framework.  No one is claiming credit for the latest edition—a version of which has been accused of undermining American exceptionalism.  The Republican National Committee charged that it “reflects a radically revisionist view of American history that emphasizes negative aspects of our nation’s history while omitting or minimizing positive aspects.”  And while the Framework makes mention of Chief Little Turtle, the leftist Students for a Democratic Society and the Black Panthers, it fails to refer to the likes of President Dwight D. Eisenhower, Benjamin Franklin and Martin Luther King Jr.

The Heartland Institute asked the College Board, who published the Framework, to reveal the authors of this “biased, poorly written, and ineptly organized document.” The College Board responded that Page v of the framework revealed the professors and teachers involved. However, on Page v, the only names listed are under the heading of “Acknowledgements.” Dr. Fred Anderson, one of the 19 educators listed on the page, lamented in a letter to the Colorado State Board of Education that he did not have “any hand in drafting this Part, so I can only guess at why the examples that appear were chosen.” “The Part” that Anderson was referring to is nearly 50 pages of course content.

This Framework will be applied to almost 500,000 students in more than 8,000 high schools across America this year.

Should any schools receive pressure letters or emails from the NCAC about APUSH or anything else, please consider the above.

URL of this page: safelibraries.blogspot.com/2014/10/apush.html