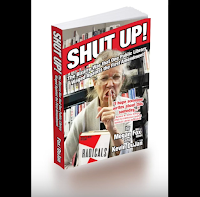 American Library Association's child pornography facilitation in America's public libraries and its homophobia is about to be exposed in a book available soon on Amazon.

The book is "Shut Up! The Bizarre War that One Public Library Waged Against the First Amendment," by Megan Fox and Kevin DuJan.

So?  What do you think?  Tell us in comments below.

You know how librarians decry censorship (yet no book's been censored since 1963) and complain (rightly) about parents who challenge school books they didn't read first?  Well, in yet another double standard, that doesn't stop them from attacking the authors and their book before it is even published.  They oppose people seeing the dirty laundry they created and perpetuated.  And it doesn't stop them from the censorship of comments supportive of the book and its authors.  So they literally make things up to deride people then censor anyone who defends, as I did, in this case.

Here's a perfect example, with my comments censored, and the derision starts right in the title:
The funniest part is Wonkette pixelates what libraries allow per ALA diktat but not per the law, thereby tacitly admitting Megan Fox and Keven DuJan are right:

Here the link to buy the book.  I bought five.

URL of this page: safelibraries.blogspot.com/2016/05/shutup.html