ALA Blames Guns, NRA for Terrorism at Orlando Gay Bar

American Library Association [ALA] leaders are blaming guns for the Islamic terrorism at the gay bar Pulse in Orlando.  ALA "Councilor" Patrick Sweeney even used the Orlando "gun violence" to fundraise [source link]:


Whenever something like this happens, I always feel like people need something to bring some balance back and take some action against this kind of horrific violence. Gun violence is a very real and terrible thing in this country. We need to take a stand and make sure that we love each other and gather together to do what is right whenever we can.  That was why we were having a fundraiser.... 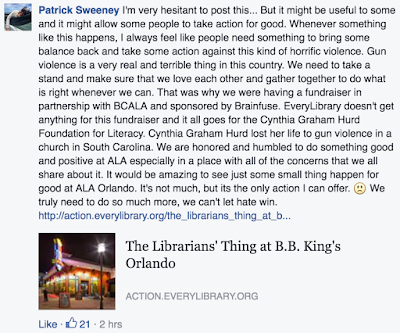 Another librarian specifically blames the National Rifle Association [NRA].  It's the first target of blame, as shown in this graphic [source link]: 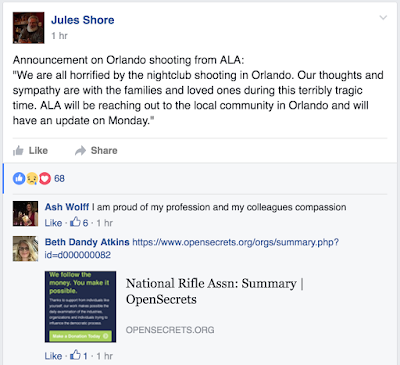 ALA has in the past so strongly supported opposition to the Second Amendment that, when the Florida Library Association [FLA] refused to follow ALA diktat to oppose Stand Your Ground laws in Florida, ALA then began building infrastructure to force FLA to comply.  Resistance is futile:


ALA is scheduled to have an annual convention in Orlando, FL, in 2016.  As a result, ALA Council is now discussing whether to move the convention out of Florida or to use the event to oppose Florida's gun laws and guns generally.

Of course the thought never occurs that if the citizens were armed, someone might have disabled or killed the terrorist before he killed so many.

Also completely silent is the matter of ALA's support for homophobia.  We are talking about Islamic mass murder at a gay nightclub, after all.

ALA's "Office for Intellectual Freedom" [OIF] hired someone to train librarians how to thwart child pornography whistleblowers.  Her training included asking why a woman would let her small children around a gay man (both the woman and the gay man were the whistleblowers).

When OIF learned of efforts to collect evidence of its homophobia, its Deputy Director (and former Acting Director) used her personal email to order public librarians who saw the homophobic training to destroy all evidence of the training (in violation of state record retention laws—and if any librarians still have this evidence, please send it to me). That's also homophobia, in my opinion.  Read the private email here:
See generally:
ALA and absolutely all of its foot soldiers have continued to maintain a wall of silence to hide OIF's promotion of homophobia.  It's been going on for years.  In the rare instance anyone is finally forced to speak on the subject, it is invariably to malign those trying to expose the homophobia, including even the gay man who committed the sin of being a public library child pornography whistleblower.

Indeed, even a federal lawsuit had been launched and lost to attempt to silence me and the authors of the book I linked immediately above.  They tried to force us to delete evidence of homophobia, including "Gay Hate @ Your Library" and "2014-07-08 = OPPL Spokesperson commits Disorderly Conduct/Breach of Peace according to Ofc. Schmidt":

So here's the same homophobic ALA absolutely overlooking the issues of terrorism, the killing of gays within the terrorist community, and the Islamic terror in the Orlando gay nightclub to blame guns.  It's "gun violence," not religious hated of freedom and gays.

I come to no other conclusion than ALA blames guns, NRA for terrorism at the Orlando gay bar.

On Monday ALA will make an announcement about this.  I predict it will officially blame guns.

ALA's President Sari Feldman has her response published.  While it does not openly blame guns, the matter of this being the second most deadly Islamic terror attack in the USA is completely absent.  Rather, it's "tragic" and must be addressed with "diversity and inclusion resources" due to "fear, ignorance and intolerance."

"We will work collaboratively with the leaders of ALA’s Task Force on Equity, Diversity, and Inclusion; Gay, Lesbian, Bisexual, Transgender Round Table (GLBTRT); ethnic caucuses; and executive office to discuss our expressions of support."  And that means blaming guns, as ALA has done in the past.  Here's ALA's response:
If ALA were truly interested in the truth instead of using the slaughter as a means for political gain, it would recognize the issue of Islamic terror and the role libraries play in encouraging that, like when former ALA de facto leader Judith Krug told the New York Times she wished the Delray, FL, librarian had protected a 9/11 terrorist's privacy instead of reporting him to the police.

If ALA were truly interested in the truth it would recognize the terror threat and order libraries to stop deleting browser search histories in violation of state record retention laws.  Yes, privacy is important so browser histories should not be made public, but they should be stored for a time for retrieval by law enforcement sources having a properly executed subpoena.

But truth is not the goal here.  The goal is to set up "[l]ibrarians and library workers [as] community leaders, motivators and social change agents."  Social change agents?  They don't see the second largest Islamic terror attack in the USA for what it is and instead blame "intolerance" and "gun violence," and they what to change our communities?

ALA deplores the gun violence that materially affects libraries in the communities we serve #OrlandoShooting https://t.co/est0CxCDe8
— ALA Chapters (@ALA_CRO) June 13, 2016

And here's ALA's Internet filtering expert who fakes that filters do not work, censors comments saying otherwise, and destroyed a man's career, never apologizing for false "sexual predator" accusations though the rest of Team Harpy did.  This is a typical "change agent" ALA wants in our communities:

Here's an example of the hatred librarians hold for free speech and opinions differing from their own. They will force their opinions down your throat even if it means being the nastiest censors themselves:

Nothing says I was spot on accurate like being publicly attacked by James LaRue, ALA's leader of the Office for Intellectual Freedom—so much for intellectual freedom: 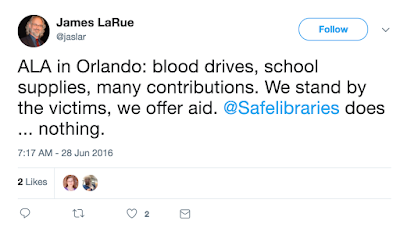 The above is a graphic of Jamie LaRue's tweet about this publication from @jaslar that I include in case he deletes the tweet so it will not show below:

ALA in Orlando: blood drives, school supplies, many contributions. We stand by the victims, we offer aid. @Safelibraries does ... nothing.
— James LaRue (@jaslar) June 28, 2016


URL of this page: safelibraries.blogspot.com/2016/06/ala-blames-guns-for-orlando.html