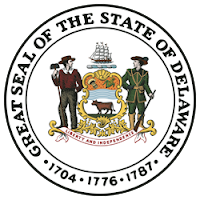 Governor Jack Markell of Delaware has expanded the state's CIPA law to include WiFi or wireless Internet access in public libraries.  Now WiFi will be filtered as well as the usual means of Internet access.  This was done to help protect children from harm.

SafeLibraries urges other states to consider similar legislation.  Be aware of loopholes (like reliance on "acceptable use policies" that never stop criminal activity) that should be closed in other states, but I'll set those aside for now and offer my services in drafting legislation or advising about options.

Here are sources of information on this significant expansion of state CIPA rights: 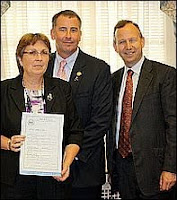 Hats off to State Librarian Anne C. Norman who, judging by the photo of her and the Governor and Representative Atkins together, must have helped to pass the new law.  This is especially impressive as she is a "Library Advocacy Day State Coordinator" for the "anything goes" American Library Association [ALA].  The ALA is an organization that:
Brava, Ms. Norman, for going against the ALA by protecting the children in your state.  Now that is true local control.

Did you see that picture of the Great Seal of the State of Delaware?  Look closely.  It says "LIBERTY AND INDEPENDENCE."  In this case it is liberty and independence from the grip of the ALA.  How refreshing.

HOUSE OF REPRESENTATIVES
145th GENERAL ASSEMBLY
HOUSE BILL NO. 340
AN ACT TO AMEND TITLE 29 OF THE DELAWARE CODE RELATING TO LIBRARIES.

BE IT ENACTED BY THE GENERAL ASSEMBLY OF THE STATE OF DELAWARE:

Section 1.  Amend § 6605C, Title 29 of the Delaware Code by striking the existing subsection (b) in its entirety and substituting a new subsection "(b)" in lieu thereof as follows:

"(b) Use of any computer or mobile device at a library shall be governed by the library's acceptable use policy.  All libraries shall post notification to patrons advising them to use personal mobile and computing devices in conformity with the library's acceptable use policy when at such library and to place appropriate controls on any devices which may be used by minors for whom they are responsible.  All users of library-owned computers must be registered library cardholders.".

Section 2.  Amend § 6605C, Title 29 of the Delaware Code by striking the existing subsection (d) in its entirety and substituting a new subsection "(d)" in lieu thereof as follows:

"(d) Libraries shall implement an Internet access management system which provides parents and guardians with choices for their minor’s use of library-owned computers.   In order for a library card to be issued to a minor, a parent or guardian of the minor must accompany the minor to the library to apply for the card and sign a form indicating whether the minor may have access to the Internet on the library's computers and, if so, the level of access.  Subject to the library's acceptable use policy, a parent or guardian may allow the minor to have unrestricted Internet access or may limit such access to content appropriate for minors.  Limited access options may include, but need not be limited to, the use of dedicated computers for minors which are filtered or provide access solely to age-appropriate electronic library collections.".

Section 4.   This Act shall take effect 90 days after enactment.


SYNOPSIS
This Act enables Delaware's public libraries to respond to expanding demand for and use of wireless and mobile technologies while clarifying that the use of such devices is subject to the Delaware Children's Internet Protection Act.  The Act furthers the goal of protecting minors from viewing obscene materials on the Internet by requiring libraries to post notices advising patrons to follow acceptable use policies and place appropriate controls on personal mobile and computing devices.  The Act also gives parents and guardians choices as to the level of their minor child's access to the Internet on library computers.  Finally, the Act enables public libraries to keep pace with evolving technologies by improving upon the current database system and allowing libraries to offer dedicated computers for use by minors with appropriate filters.

Posted by SafeLibraries® at 3:15 AM