Opposing FISA is the American Library Association's Latest Directive, on September 11, No Less

The American Library Association's [ALA] latest directive is to oppose FISA and its means to help prevent further terror attacks in the USA.  The ALA directive was made on September 11th, the eleventh anniversary of the 9/11 terror attacks.  It uses paranoid scare tactics to motivate people to act, such as: "Watch what you say and do on your phones, emails and other communications":

The message to all House members:  Oppose H.R. 5949 the FISA Amendments Act Reauthorization Act of 2012, H.R. 5949.  Protect Americans’ privacy and constitutional rights.  Do not extend the FAA sunset until December 31, 2017.

ALA asks library supporters to ask the House to oppose this latest attempt to reauthorize the FAA.  Unexpectedly, a quick vote on H.R. 5949, is scheduled for this Thursday, September 13th.

BACKGROUND:  It’s déjà vu all over again: Watch what you say and do on your phones, emails and other communications because, once again, the House of Representatives appears ready to reauthorize the 2008 FAA law that legalized the Bush administration’s warrantless wiretapping program and more.  The American public, including our library patrons, will continue to be exposed to needless surveillance under this reauthorization.

The FISA Amendments Act Reauthorization Act of 2012, H.R. 5949, (yes, this is the correct name of the bill and the law) would extend the provisions of the 2008 FAA to December 31, 2017, rather than letting the FISA sunset on December 31, 2012.  The government is allowed to get 12-month orders from the secret FISA court to conduct “dragnet surveillance of Americans’ international communications—including phone calls, emails, and internet records—for the purpose of collecting foreign intelligence.” *

As we did in 2008, the American Library Association (ALA) continues to argue against the FISA Amendments Act because of the FAA’s lack of transparency and the potential for abuse of the system that has been created.


Furthermore, the ALA literally joined as co-signer with the Council on American-Islamic Relations [CAIR] to oppose FISA in the past:

By contrast with ALA, the Obama Administration supports FAA: 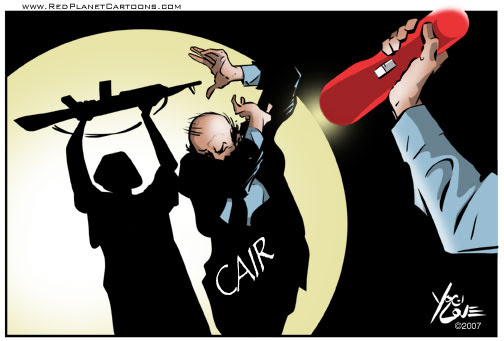 What does any of this have to do with librarianship, the proclaimed mission of the ALA?  Is the ALA in your community library having any influence at all?  Is it okay that a terrorist-friendly organization has influence over your local community library and local school library?

Has ALA political capital just been further attenuated by once again lining up on the losing side of yet another non-library matter?

The Third Jihad: Radical Islam's Vision for America was used by the NYPD for counterterrorism training.  The ALA is part of the problem described therein when it works with CAIR to censor perceived/presumed opposition such as Robert Spencer of Jihad Watch, uses Soros funding to support Soros/CAIR's interests, or directly joins with CAIR to oppose national security interests having nothing to do with librarianship.

Oh, for the people shocked to hear the ALA supports terrorists, here's one more example, showing the ALA wished library patron privacy laws had protected a 9/11 terrorist from being reported to the police: