Watch this elected library trustee Diane Jennings and library public relations employee Bridget Bittman attack a gay man who happened to have exposed the library for allowing and covering up child pornography:

But ALA has not learned.  The women shown in the video calling the gay man a "fruit" provided training for ALA to many librarians where she made homophobic remarks during her training about why a mom would let her children near a gay man.  Has ALA cut ties with this hater?  No.  She's been invited back for more ALA-sponsored training.

And of course she's still working at the library, a library that's such a joke that even Seth Meyers at Saturday Night Live with guest star Lady Gaga made fun of it:

Is there a reason people should get away with gay hate simply because they are supposedly innocent librarians or library supporters?  Is there a reason mainstream media should ignore the gay hate, even in the face of videotaped evidence?  Is "faggots" @ your library® an acceptable trademark?

Outside the library world, people like multiple Academy Award nominee Jonah Hill apologize for saying "faggot."  "'What I said in that moment was a disgusting and hurtful term,' Hill told [Howard] Stern. 'I shouldn't have said that.'"  Why are public library officials immune?  Why are library media not reporting this story (that's being going on for almost a year now)?

Does being a library supporter bestow magical protection that allows gay hate?  97% of librarians have seen code of conduct violations at ALA conferences, including 23% of librarians reporting being sexually harassed, and "It's true, the majority of the people who were harassed did not report," so I suppose from those stats and from the what I've reported above that homophobia is acceptable within that community.  Is it acceptable in yours?


And still no coverage from Library Journal and American Libraries.  That tells me they condone the gay hate.

I cited statistics from a librarian named Ingrid Abrams who calls herself "The Magpie Librarian."  This women actually deletes and changes my comments that appear on her blog, then attacks me for the quotes as she's rewritten them; some people don't like the truth and distort it in different ways.  I say this so you can see she does not like free speech.  Now you can see she does not like me:

All the comments originate from Chicago, IL, home of the American Library Association, or surrounding communities, and all match the pattern of harassment I have seen before from Deborah Caldwell-Stone, Esq., at the American Library Association's Office for Intellectual Freedom in Chicago.  Certainly the homophobia in the comments matches the homophobia within ALA OIF where Deborah Caldwell-Stone is the Deputy Director and former Acting Director, right down to naming the very same person simply for being gay.  I have written about how ALA OIF harms the LGBT community in the past and will be writing on new evidence of hate within ALA's OIF.  The evidence includes that provided by whistleblower librarians who can't stand the hate either.  I am in the process of writing that now.

Ms. Caldwell-Stone, please stop.  It's especially embarrassing to other members of your profession.  Of course, now that I said that, you'll go right on doing it to prove it isn't you.  Smh.

This post of mine is now the basis of my being sued in federal court for defamation:

Over a year later I am still being sued for publishing this post exposing homophobia by ALA, even after a judge dismissed me out of the case for there being no there there.  See: "Bridget Bittman Handed Another Defeat in SLAPP Lawsuit."

Obviously it's a SLAPP suit designed to silence me.  The complaint was simply amended (for the second time) to keep silencing me, this time complaining that my filing FOIA requests is the basis for jurisdiction over me.  So much for freedom of information from the "Office for Intellectual Freedom." 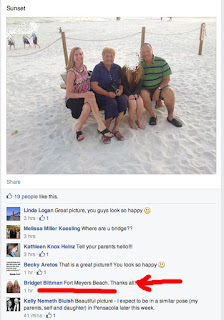 "TAKING PARTS OF DISCUSSION OUT OF CONTEXT WOULD BE HARMFUL SO WE CANNOT ALLOW ANYTHING FROM 17 DEC TO BE PRODUCED IN RESPONSE TO FOIA" -15
— Dan Kleinman (@SafeLibraries) August 7, 2015

I am perfectly willing to show the entire recording, there will be nothing taken "out of context."  Besides, when it comes to homophobia, it's acceptable in the right context?

"There is still time to get ahead of this if we act today. Deny, delete, defend. – dcs" DENY, DELETE, DEFEND #libchat @LibraryJournal -24
— Dan Kleinman (@SafeLibraries) August 7, 2015

"Deny, delete, defend."  This from the attorney and Deputy Director of ALA's—get this—"Office for Intellectual Freedom."

As to the homophobia, can you imagine any one using and rehiring homophobic trainers then ordering the destruction of evidence that proves it beyond the shadow of a doubt?  The American Library Association has done this.

We must demand ALA disclose the evidence.  After it does, we must address the homophobia, let alone the directives to hide evidence of crime from the public or to destroy it.

And absolutely no media in over a year has written on this LGBT hate right in the heart of the American Library Association's "Office for Intellectual Freedom."  Worse, the few librarians who do discuss this do so only to smear me; they ignore the homophobia and attack the messenger.

It is my opinion that homophobia runs deep within the library profession because both librarians and library media actively cover up for the homophobia that ALA displays and orders librarians to suppress, and most comply.

A few brave souls are willing to ignore ALA and, anonymously, disclose the truth directly to me or the child p0rn whistleblowers.  Thank goodness.  More reports are welcome.  Anonymity / confidentiality guaranteed.

The above is all my opinion, of course, intended for a worldwide audience, so there should be no further misunderstanding or excuse to file an additional SLAPP suit. 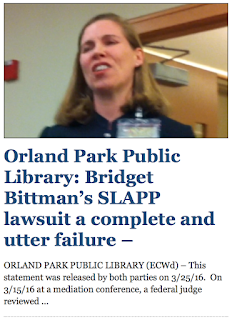 Here are updates on the lawsuit that this post of mine somehow engendered:
Then there's this. The Orland Park Public Library has become a pop culture joke.  Again.

Besides the Saturday Night Live skit shown above, this is fresh from the library's own local Chicago Tribune newspapers: "No one will be surfing for pornography on the Internet at the Orland Park Public Library on Good Friday."  Here's a picture showing the article dated March 24, 2016, 4:14 PM: 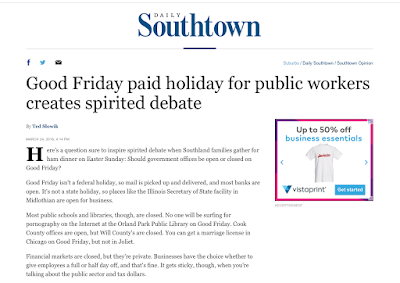 "You can surf the Internet at the Orland Park Public Library, which is open on Good Friday, but not at the Tinley Park Public Library, which is closed."
Here's a picture showing the article date was modified the very next morning, March 25, 2016, 11:35 AM, likely when "pornography" was disappeared.  Not even whitewashed, just disappeared.  Boy, they jumped on that pretty fast!  Chicago protecting its own. 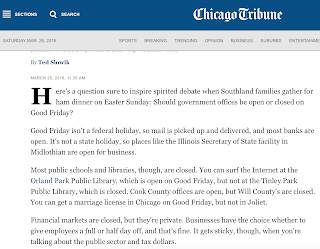 The case against me has been dismissed a second time, this time with prejudice:


URL of this page:  safelibraries.blogspot.com/2014/07/gay-hate-at-your-library.html

Posted by SafeLibraries® at 2:44 AM